The Bulls didn’t just make it rain in the United Center on Wednesday night … they made it downpour.

After shooting roughly 31 percent over the last five games, the team absolutely exploded for a 53.2 percent clip tonight, knocking down a franchise record 25 three-pointers – a mark that fell just four shots shy of the NBA record for a single game. Unsurprisingly, the Bulls back-court duo of Coby White (10-20 FG, 8-17 3PT) and Zach LaVine (17-25 FG, 9-14 3PT) made this historic performance happen, combining for 17 of the team’s 3’s and a total of 76 points on the night.

According to NBA.com, tonight was the first time in NBA history that two teammates each knocked down 8+ 3-pointers in a game. That’s right, not Steph Curry and Klay Thompson and not Damian Lillard and CJ McCollum … but freakin’ Zach LaVine and Coby White. Truly insane.

Zach LaVine and Coby White have each hit 8 threes so far tonight.

They are the first pair of teammates to ever hit 8+ threes each in the same game. pic.twitter.com/bWBWaNj9Kv

The Bulls could not have drawn up a winning formula any more perfect than that.

With Zion Williamson and Steven Adams in the opposing frontcourt and Lauri Markkanen and Wendell Carter Jr. on the sideline, this game truly felt like a lost cause. After repeatedly struggling to match other team’s physicality over the past five games, it was clear that they would need to up their production along the perimeter to keep this thing close. And while I thought that was certainly a possibility, I would have never thought they would wind up draining buckets at this rate (well …kinda … I did call for a 3-point breakthrough and big Coby White game in Pre-Gamin’ #ShamelessPlug).

At the end of the day, I’m still not thrilled about going 2-3 against the Knicks, Magic, and Wizards, but I would be lying to myself if snapping the Pels 4-game win streak didn’t make me feel a little better. Let’s see if they can carry this momentum into the weekend … god only knows they’ll need it. Clippers-Bulls on Friday! 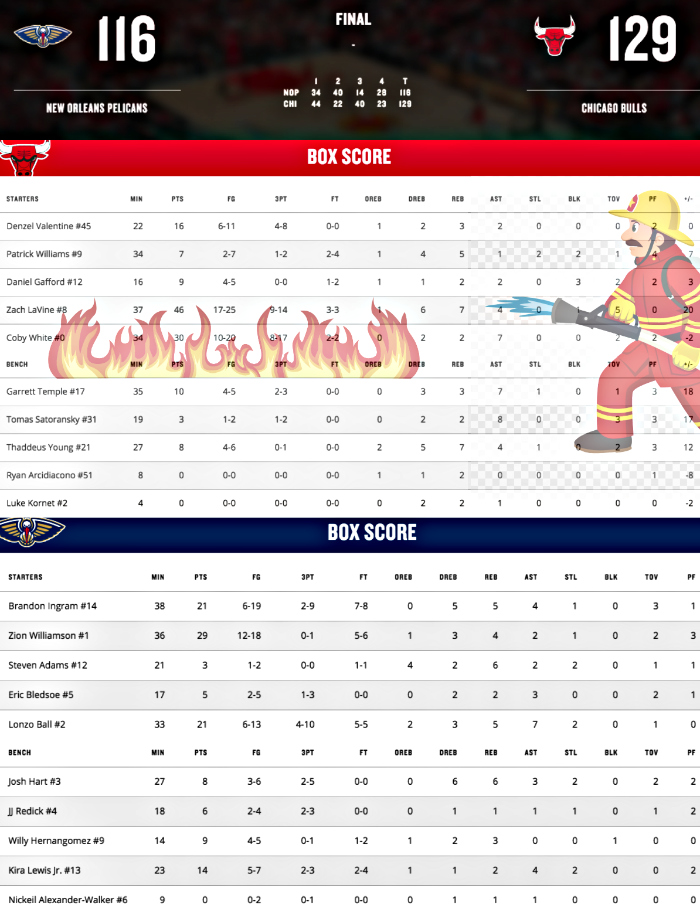