How Does Zach LaVine Stack Up Against His Fellow All-Star Contenders? (And Other Bulls Bullets) Skip to content 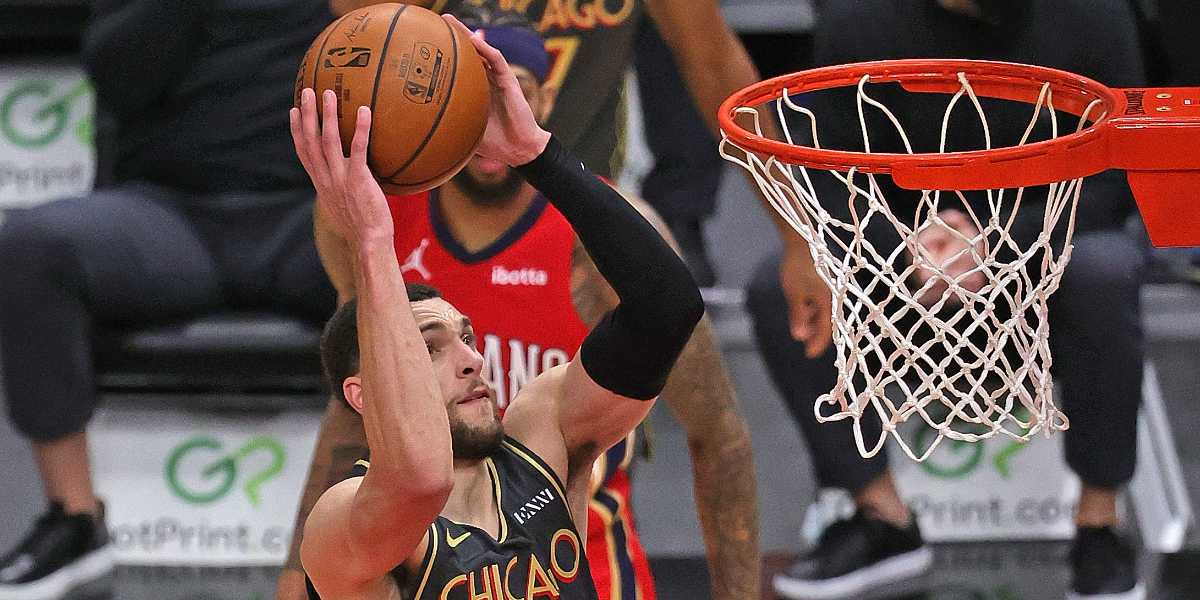 Did you see what happened last night!? Oh … you did?

Eh, you might as well still watch it again! Better than work, right?

Wake Up and Watch the Chicago Bulls Break a Franchise 3-Point Recordhttps://t.co/pWrSSl0UEA

•    Cases for why Zach LaVine should not be an All-Star this season are becoming as convincing as, “my dad ate my homework” (wait, is that not how it goes?). After last night’s explosive 46-point performance, LaVine became the first Bull since Michael Jordan to score 120 points in a 3-game span. His averages on the season increased to 28.2 points, 5.3 rebounds, and 5.3 assists on 51.8 shooting from the field and 42.5 percent shooting from behind the arc. The 25-year-old continues to prove he is nothing short of an elite offensive weapon – not only one of the best in the Eastern Conference but one of the best in the league. While folks can pick apart his defense, there is still no question that we’ve seen improved effort on that end of the court this season. And, let’s be real, we’re dealing with an offensive-minded league. If LaVine is putting up these numbers on that end of the floor, it should be worthy of recognition.

•   Okay, but how exactly does he stack up against his fellow All-Star contenders? Well, LaVine’s 28.5 points per game are currently the 6th-most in the NBA. He also happens to be the league’s 3rd-leading scorer in the month of February behind only Stephen Curry and Joel Embiid. He is one of only three players in the league this season to be averaging at least 27 points per game, shooting at least 50 percent from the field, and at least 40 percent from downtown, joining Kevin Durant and Kyrie Irving. And if we want to be real picky, LaVine has played six more games than each of them, 208 more minutes than Durant, and 212 more minutes than Irving. Meanwhile, LaVine’s true-shooting percentage sits at 65.2 percent, which ranks second behind only Stephen Curry among players who average at least 33 minutes per game. I also love the fact that his finishing at the rim has gone from 59 percent in 2019-20 to 70 percent this season. I can’t stress enough how good it is for a guard to be finishing at that high of a clip inside, but maybe this can: Among non-bigs with 600 or more minutes this season, only eight are finishing 70 percent of their shots at the rim (Monte Morris, Jaylen Brown, LeBron James, Mikal Bridges, Terrence Ross, LaVine, Jrue Holiday, and De’Aaron Fox). Of those eight, LaVine has the highest overall eFG% at 61.1 percent. I can keep going … but I won’t.

•   The only reason that I can envision LaVine getting snubbed is due to the win-loss column. Without the Bulls vastly exceeding expectations in that category this season, voters might assume that LaVine’s “non-winning” ways are failing the Bulls yet again. But I think that argument is also becoming harder and harder to make with the Eastern Conference standings looking the way they do. The Bulls not only sit in a play-in tournament spot right now at 10th, but they are only technically 2.5 games back from the 5 seed. Yup, that’s right, each team from the 5-seed down is currently operating on a below-.500 record. Also, we just can not say anymore that LaVine isn’t performing like a “winning player.” His effective field goal percentage and true-shooting percentage shared above demonstrates just how efficient he has been this season. Likewise, he has led the Bulls to a 3-3 record so far this month, which is pretty solid when we consider … ya know … this is the Bulls.

Coby White on seeing Zach LaVine continue to have shooting barrages: "Is it blazing hot or is that just him?"

•   Context: I’m not sure if you remember, but the head coach that shall not be named said that he wanted the Bulls to average 35 assists per game … which has never been done in the history of the NBA.

•   Patrick Williams’ box score does not tell the whole story. While the rookie finished with only 7 points and 5 rebounds against the Pelicans, he played a critical role in the team’s ability to overcome the Zion Williamson-Steven Adams frontcourt. He recorded 2 steals and 2 blocks on the night, and his aggressive presence alone helped the Bulls win the rebounding battle 42-39. Billy Donovan kept him on the court longer than only one starter (Zach LaVine), which goes to show just how valuable his team views him to be. Shoutout to Will Gottlieb for putting together a great thread of Williams’ best defensive plays from last night. Give it a look.