As All-Star Voting Winds Down, Zach LaVine Appreciation Trends Up Skip to content 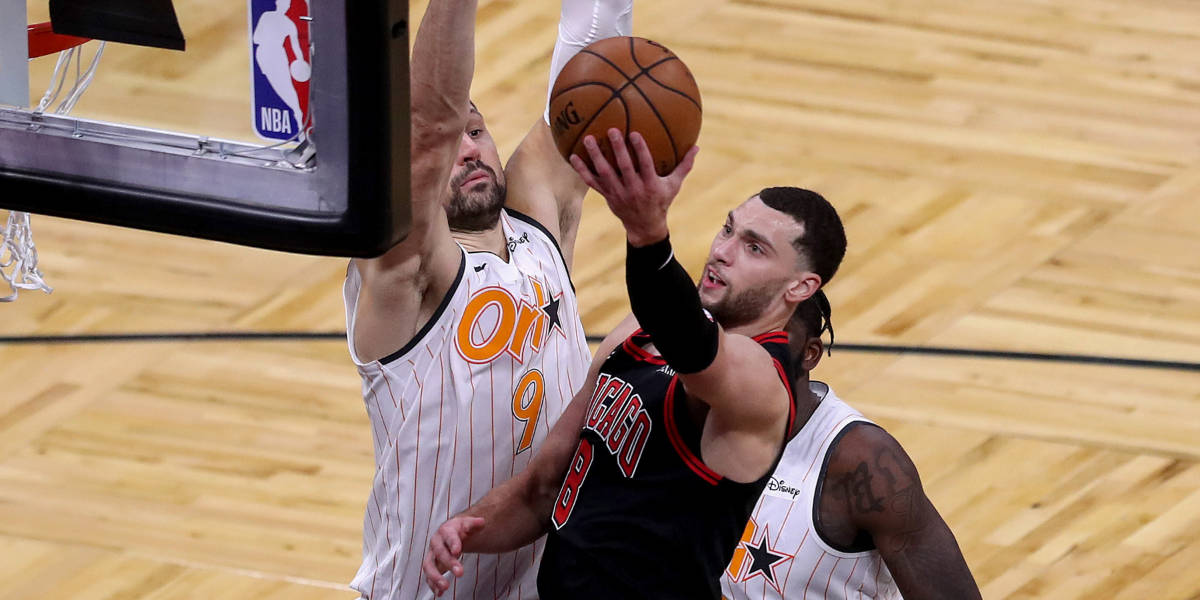 Zach LaVine is doing everything right.

The Bulls 25-year-old is the closest he has ever been to an All-Star nod thanks to a career-high stat line of 28.2 points per game with 5.2 assists and 5.5 rebounds. He is currently one of the league’s most efficient scorers, averaging a ridiculous 60.6 effective field goal percentage which ranks in the NBA’s 95th percentile, per Cleaning the Glass.

The more efficient LaVine becomes, the harder it is to make the all too familiar”empty stats” argument. The Bulls may not be an above-.500 team (11-15), but they are playing considerably better than last season and also happen to be one of the highest-scoring offenses in the NBA. LaVine’s career-high shooting clips and improved playmaking is a big reason for that, and that is likely why we finally see some NBA analysts giving him the stamp of approval.

ESPN’s Kevin Arnovitz was one of the first big names to recently pencil LaVine into his All-Star ballot, giving him the final wild-card spot on the Eastern Conference roster on a recent episode of The Lowe Post podcast. The Ringer’s Kevin O’Connor has now followed suit, choosing LaVine over players like Malcolm Brogdon, Jrue Holiday, and Fred VanVleet. O’Connor doesn’t shy away from the fact that he used to be a LaVine skeptic and admits that his newfound effort on defense and serviceable passing has moved LaVine into a new direction.

For O’Connor’s full reasoning, though, make sure to check out his full ballot below:

Here are my 2021 NBA All-Star starters and reserves.

There are many this season. https://t.co/Wlh6hHnyeK

LaVine also finds his way onto Michael Pina’s ballot over at Sports Illustrated, and I think he offers arguably some of the best reasoning I’ve seen for why other voters should consider finally pushing LaVine over the hump.

His True Shooting percentage is not only higher than Trae Young, Collin Sexton, Fred VanVleet, Gordon Hayward, Domas Sabonis, Malcolm Brogdon, Nikola Vucevic, Tobias Harris, and just about any other serious candidate for this final spot (not to mention Nikola Jokic, Harden, Irving, Middleton, and many more), but the only player who’s ever used at least 30% of their team’s possessions with a 65.0 true shooting percentage for a full season is Curry, during his second MVP campaign. Right now Curry is doing it again, along with Embiid and LaVine.

Also! According to Cleaning the Glass, LaVine is a few decimal points from joining Durant as the only non-big shooting at least 70% at the rim (LaVine’s at 69%), 50% on long twos, and 40% from behind the three-point line. (The 70/50/40 club should definitely be a thing.)

Scoring isn’t everything, and I get that. But LaVine isn’t just a scorer – he is arguably one of the BEST scorers in the NBA. In my opinion, that is a skill worth recognizing, especially if we continue to see other areas of his game trend in the right direction as well.

I think the only semi-justifiable reason to keep LaVine off the ballot would be the win-loss column. However, as the nods from these analysts suggest, even basing a decision off that is becoming much harder to do. If Bradley Beal can be a clear-cut All-Star this season, and Trae Young can be named a starter in 2020, then LaVine deserves his shot. Plain and simple. We are learning more and more as time goes by that the Bulls losing ways are likely not because of LaVine but despite LaVine’s best efforts.

Anyway, today is the FINAL day for fans to submit All-Star votes, so make sure you tweet your heart out or go to NBA.com to submit a ballot. The chances of him becoming a starter feel slim, but the more fans and media show him some love, the more he should be on the minds of the NBA coaches who vote for the reserve spots.