I’m proud of the Chicago Bulls.

While they might leave Philly with another L tonight, they certainly made the most of their ESPN debut. The 76ers are the No. 1 team in the Eastern Conference and the 4th best team in the NBA, yet the Bulls stayed on the cusp of victory until the waning seconds. Even better, they did that with Joel Embiid looking like arguably the most dominant player in the league. The 76ers big man has been an early favorite for this year’s MVP award, and his career-high 50-points (FG 17-26), 17 rebounds, 4 blocks, and 2 steals showed exactly why.

What really made me proud, however, was the way this team stayed afloat. Unlike most close games, the Bulls offense was pretty dismal. They shot an underwhelming 42.1 percent from the field and a putrid 21.9 percent from downtown. Yet, this team found themselves down only three 1:28 to go. They simply had pure hustle and effort to thank for that. I know that sounds like something the head-coach-that-shall-not-be-named would use to try to ease an unpleasant loss last year, but this year, head coach Billy Donovan has actually made those words mean something.

The Bulls’ scrappiness and physicality helped them shoot a perfect 18-18 from the free-throw line and led to multiple great defensive possessions (forced Philly into a game-high 15 TOs, held them to just 7-21 behind the line, and recorded six blocks). Whether it be running for loose balls or getting out in transition, I just have not seen this Bulls team work so hard in quite some time. It made for a good watch, and I’m sure it left many of those watching around the country at least somewhat impressed with the direction of this franchise.

As the announcers made sure to say during the 4th quarter, good teams simply find ways to stay in games, and tonight the Bulls looked like a damn good team. 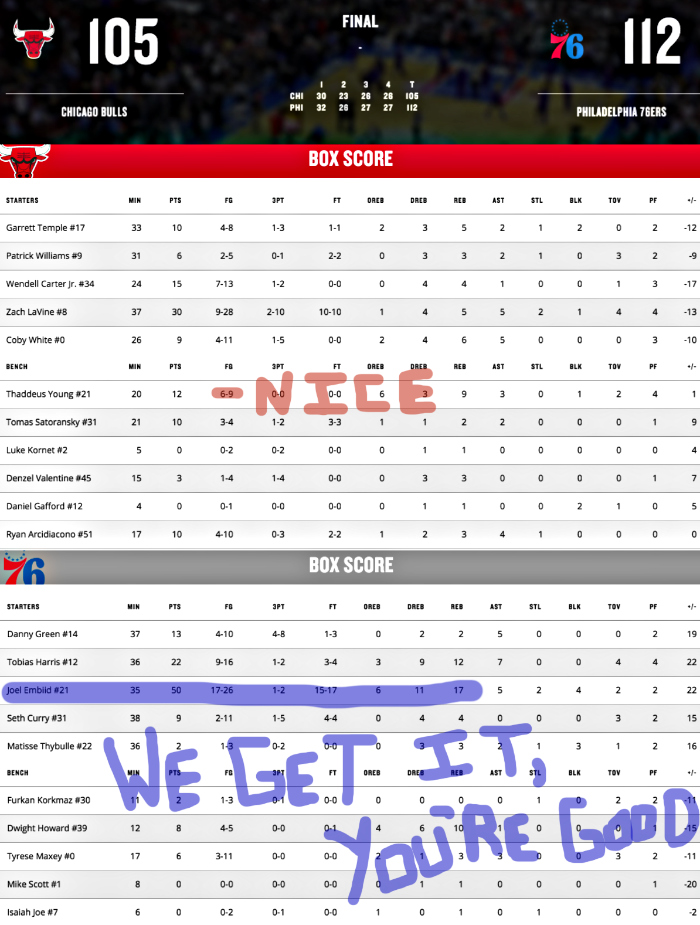