The Chicago Bulls won a game they were supposed to win. With the Sacramento Kings down multiple key players, including starting forward Harrison Barnes and center Richaun Holmes, it would have been hard for the Bulls to justify any version of a loss tonight.

But don’t get me wrong, that still doesn’t take anything away from the bonkers performance Zach LaVine managed to put on for, like, the gazillionth time. One night after a hard-fought battle against the Eastern Conference’s best team, LaVine dropped 30+ points for the 4th game in a row. He now has 15 30-point performances on the season, which ranks him third in the league behind just Bradley Beal and Damian Lillard.

The Bulls star guard shut down any criticism he received for going 9-28 from the field last night, scoring his 38 points on a highly efficient 15-20 shooting performance. What is really the sweetest part about tonight’s flashy outing, though, is the fact that it happened in the last game before the NBA coaches will submit their votes for All-Star reserves. The man has now bumped his season average up to 28.9 points per game, and he has averaged an absurd 35 points per game over the team’s last 8 contests, leading them to a 5-3 record in that span.

In other words, LaVine could not have made a better final push for his first All-Star nod. And if the league doesn’t reward him, I will find a way to sue Adam Silver.

Game has slowed down for the 25-year-old LaVine.

In other (quick) news: Patrick Williams recorded his second-career double-double like a boss, Coby White drilled five 3’s like a bucket, and Thaddeus Young finished with 18 points, 4 assists, and 2 blocks off the bench like a Sixth Man of the Year candidate. All in all, it was a good night. 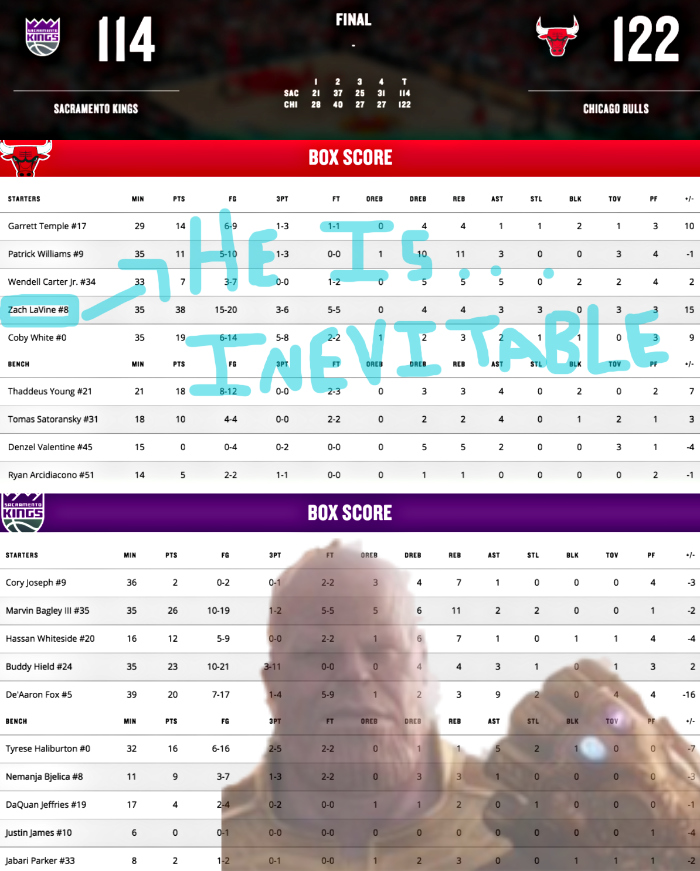