Building on a Strong Week, T-Wolves Make a Coaching Change, All-Star Decision Week, and Other Bulls Bullets Skip to content 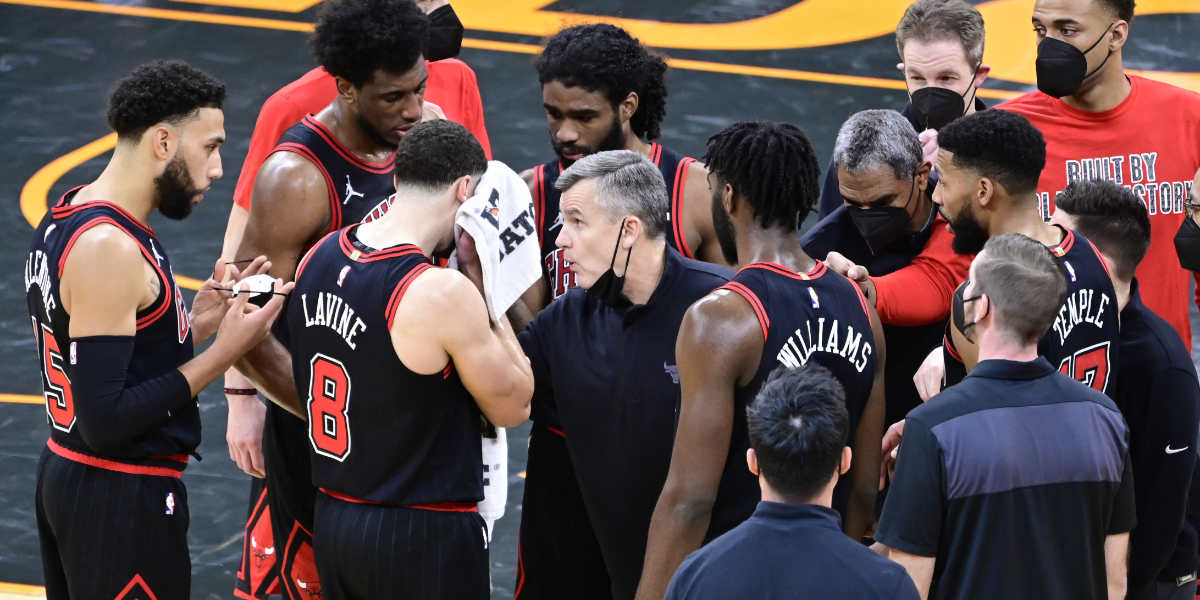 Things trending up: Dogecoin, the temperature, my need for a haircut, and the Chicago Bulls.

•   After a 3-1 performance last week – with wins over the Pacers, Pistons, and Kings – the Bulls now sit with a record of 6-4 in February (13-16 on the season). The team is one game back of the 7th seed, and while it can certainly be considered a close race in the Eastern Conference, the Bulls might be starting to separate themselves from the pack. A more consistent effort on the defensive end blended with the All-Star worthy heroics of Zach LaVine has given this Chicago team a new pesky identity. Much unlike last season, they simply can’t be viewed as an easy out, and that is part of the reason why The Athletic moved the Bulls from 24th to 20th in their latest Power Rankings (via Zach Harper): “It’s hard not to like how the Bulls have looked lately. They move up this week, and it was hard not to put them higher.”

•   The Bulls have a good chance to make it even harder not to slip them into the top-20 this week. After two very winnable contests against the Houston Rockets (11-17) and Minnesota Timberwolves (7-24), the Bulls will be tested with the Western Conference’s 4th-place Phoenix Suns (19-10) and the East’s surging Toronto Raptors (16-15). Last week was arguably the first time this season the Bulls avoided takings two steps forward and one step back. There was no random loss to the OKC Thunder, Knicks, Wizards, or Magic. Instead, they pulled off an unexpected OT victory against the Pacers, came back from a 25-point deficit versus the Pistons, battled until the very end with the 1st-place 76ers, and took care of a depleted Kings team like they were supposed to. Good teams build on weeks like that, so let’s hope that’s the case for Donovan’s crew.

•   I was surprised to see that the Draftkings Illinois Sportsbook (sign up here!) listed the Bulls as only a 1-point favorite for tonight’s matchup with the Rockets, especially after having the week we just addressed. I know they are on the road and this will also be their third game in four days, but Houston has lost seven-straight and could enter tonight’s game without Victor Oladipo or DeMarcus Cousins. I guess I can understand the “trapability” of this game, but as long as the Bulls play like they have over the past few games, I do feel like they walk away covering that spread.

•   Now, with that said, there are some things to worry about with tonight’s matchup. Even though Zach LaVine’s defense has been trending in the right direction, I think it’s going to be hard for him to slow down the explosive John Wall, who has averaged 27.7 points and 7.3 assists over his last three games. Additionally, the Rockets operate with the 4th-best defense in the league, which will certainly feel like quite the stark contrast from the last-place Kings defense the Bulls played on Saturday.

•   Then … like two seconds later … they hired a new one. The Bulls will see them on Wednesday.

•   The Athletic’s Shams Charania joined The Mully & Haugh Show on 670 The Score this morning to talk some Bulls basketball, and while he didn’t offer any groundbreaking news, he did give some encouraging words for LaVine All-Star chances: “As far as Zach’s concern, I think he has played like an All-Star and coaches view him in that light.” Coaches are supposed to submit their All-Star ballots this afternoon, so we should hear whether or not LaVine made the final cut sometime tomorrow (remember, if he doesn’t, I’m going to sue Adam Silver).

•   FWIW: Charania also touched on the trade deadline and said he expects teams to continue to call the Bulls about LaVine. However, he also made it clear that he has not gotten any inkling that the Bulls would look to trade him, which coincides with previous reports from ESPN’s Brian Windhorst and The Athletic’s Sam Amick.

Bulls guard Coby White has been wearing different custom hoodies before home games all year, with a Black History Month theme for February

We chatted those hoodies for this Q&A and how White is trying to express himself through his clothing: https://t.co/LBPaCQ3TkE

•   NBA refs are having (another) bad season.

Kawhi was called for an offensive foul on Harden: pic.twitter.com/3TyukEZSzH