Alright, Everyone, Be Cool ... I'm Gonna Talk About the Bulls Playoff Odds for a Minute Skip to content

I know, I know … we’re not supposed to be talking about the playoffs this year. Arturas Karnisovas, Marc Eversley, and Billy Donovan are supposed to be doing little more than evaluating the roster, demonstrating a player-first culture, and possibly making a mid-season trade or two with an eye on the future.

But I can’t help it.

This Bulls team is 7-5 over the last 12 games and currently 8th in the Eastern Conference. And they’re not just getting lucky: Their defense is improving. Zach LaVine is evolving into the player we always hoped he could be. Wendell Carter Jr. is bringing the physicality. Thaddeus Young is glowing every night. Patrick Williams is vindicating AKME’s use of the No. 4 overall pick. And collectively, they’re beating teams they’re supposed to beat while hanging with better teams until the very end.

So, yeah, I’m gonna do it. I’m gonna talk about the playoffs.

With 30 games in the bag, the Chicago Bulls are a little over 40% through the 2021 season, which, if you recall has a different playoff format this year. In short, the 7th, 8th, 9th, and 10th seeds in each conference will have to play their way into the postseason. And it works like this:

Now let’s take a quick look at the Eastern Conference Standings as of the start of play today.

The Bulls are still two-games below .500 at the moment, but right now that’s good enough for one of the four play-in spots. And given the way they’ve been clicking, plus their general improvements and health, it’s not a terrible position to find such a young and inexperienced team nearly half-way through the season. So what do the odds say? Well, there are basically two ways to look at this, albeit using three different forecast models. Let’s start with the bad news.

According to FiveThirtyEight’s player-based forecast, the Chicago Bulls have about an 18% chance of making the playoffs this year, which is actually their highest percent chance so far this season: 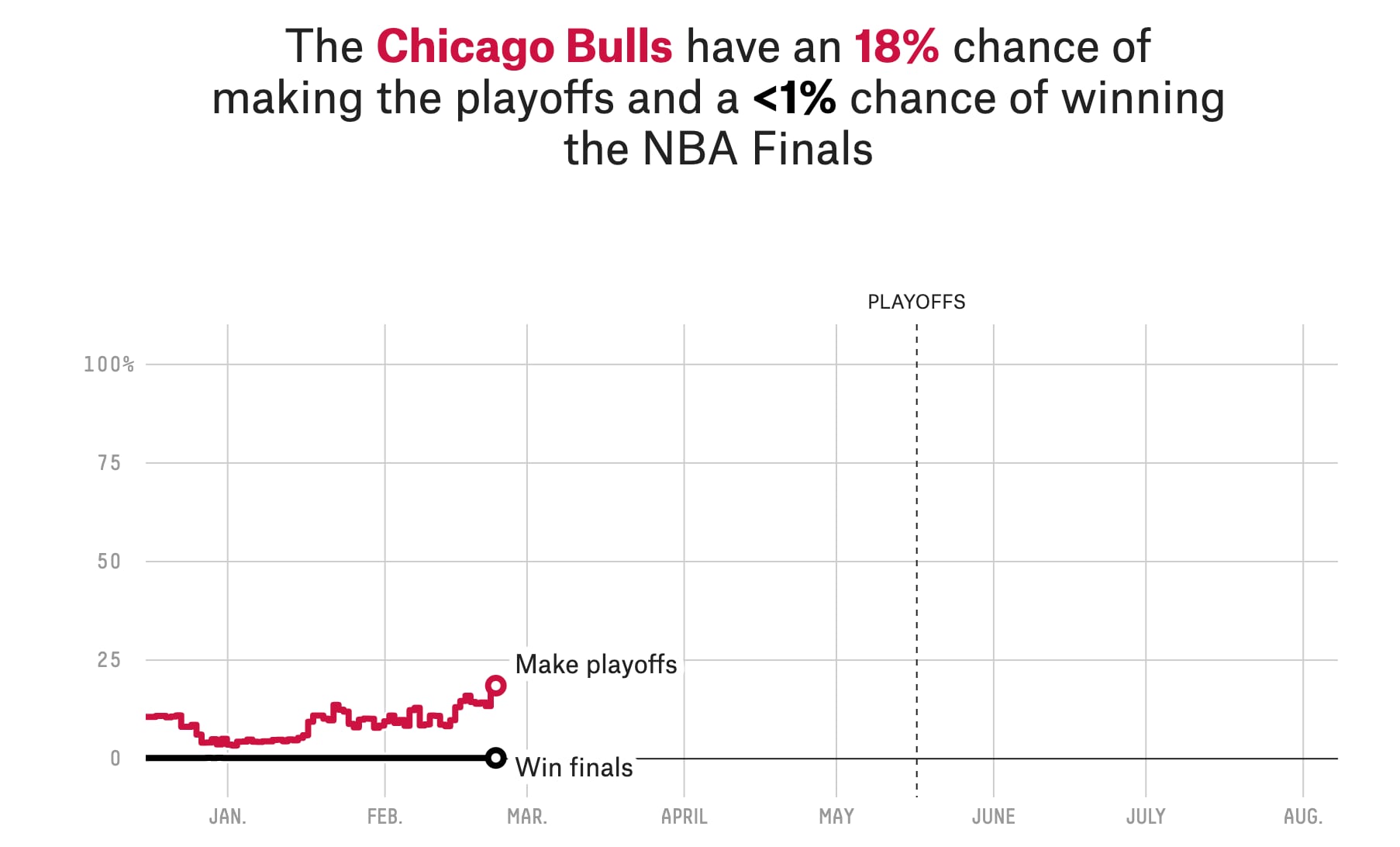 But that comes with an awful lot of caveats.

And for what it’s worth, ESPN’s playoff odds have the Bulls with a very similar 17.1% chance of making the playoffs this season, which gives the FiveThirtyEight forecast a little more weight (when two distinct models come to the same conclusion, you should probably take heed).

Which brings me to my next, and even better, point: FiveThirtEight’s other model.

The playoff probabilities listed above were based on FiveThirtyEight’s player-based RAPTOR forecast, which is “based entirely on [their] NBA player projections.” In other words, there’s a lot of very important context missing (it still has a ton of value, mind you, but there are other ways to look at this).

By contrast, FiveThirtyEight’s ELO forecast, which includes “a measure of team strength based on head-to-head results, margin of victory and quality of opponent” tells a VERY different story. By that measure, the Chicago Bulls actually have a 46% chance of making the playoffs this season, ahead of the Cavaliers (<1%), Pistons (2%), Wizards (13%), Magic (19%), Hawks (26%), and Hornets (32%) in the East. And, indeed, they’ve had the fifth biggest one-week change in their ELO rating in the entire NBA.

So where does that leave us? Well, listen, there’s still an uphill climb here. Unless the Bulls somehow find a way into the sixth seed, which seems highly unlikely, they’ll have a tough mini-play-in tournament to overcome to sneak into the playoffs. And even if they manage to make it past that first hurdle, they’ll be one of the last two seeds with the toughest first-round matchups.

So in all likelihood, we’re talking about contending for a playoff spot, not a championship, and that’s a big distinction.

But don’t lose sight of how meaningful that can be. At the lowest level, this is a very young and inexperienced team that could absolutely use playoff experience to their advantage in the future. For another, that sort of surprise showing relative to expectations might just help this front office demonstrate to future free agents and trade targets that Chicago *is* a franchise renewed with a bright future *immediately* ahead of them. And from there, anything can happen.

You have to crawl before you walk and walk before you run. So hopefully, the Bulls can keep up their momentum, give us something to root for down the stretch, and turn this franchise back into something we can be proud of. Is that too much to ask?