When the game went to OT, the Bulls (15-16) cracked their knuckles and went to work.

All things considered, it shouldn’t even have gotten to that point. Sure, the Bulls allowed the last-place team in the league to stick around throughout the entirety of the game with 21 turnovers and 13 offensive rebounds allowed, but they were still the clear winners when the regulation buzzer sounded. The only reason we were gifted some free basketball was because the refs weren’t ready to go home.

Up three with 4.9 seconds to go, the refs decided that Coby White’s foul on Ricky Rubio was worth three free throws. As probably anyone with a set of eyes could tell you, it seemed pretty clear White (1) fouled Rubio on the floor and (if anything) (2) Rubio was passing the ball instead of putting up a shot. Rubio, of course, went on to knock down all his freebies, and the refs got to watch a little more basketball.

Stupid, but whatever. The Bulls realized the absurdity of the moment and came out with an agenda. The team went on a quick 7-0 run to start the overtime period, immediately sealing themselves a third-straight victory for the first time this season.

Thanks to a 127-112 loss for the Celtics, the Bulls are now sitting 6th in the Eastern Conference. That’s right, if the regular-season ended today, the Bulls would be locked into a first-round playoff series. No play-in tournament. How fun is that?

Reality, however, says the Bulls still have 38 games left to play and a second-half schedule that looks … well … less than easy. Not to mention, only two games separate the No. 4-11 seeds in the Eastern Conference, which means we’re in store for A LOT of movement down the road. But don’t let me tell you not to celebrate! The fact of the matter is the Bulls are very much in the hunt for a playoff seed, and they are also clearly playing some of their basketball in years. It’s 100 percent okay to acknowledge that and be encouraged by that. 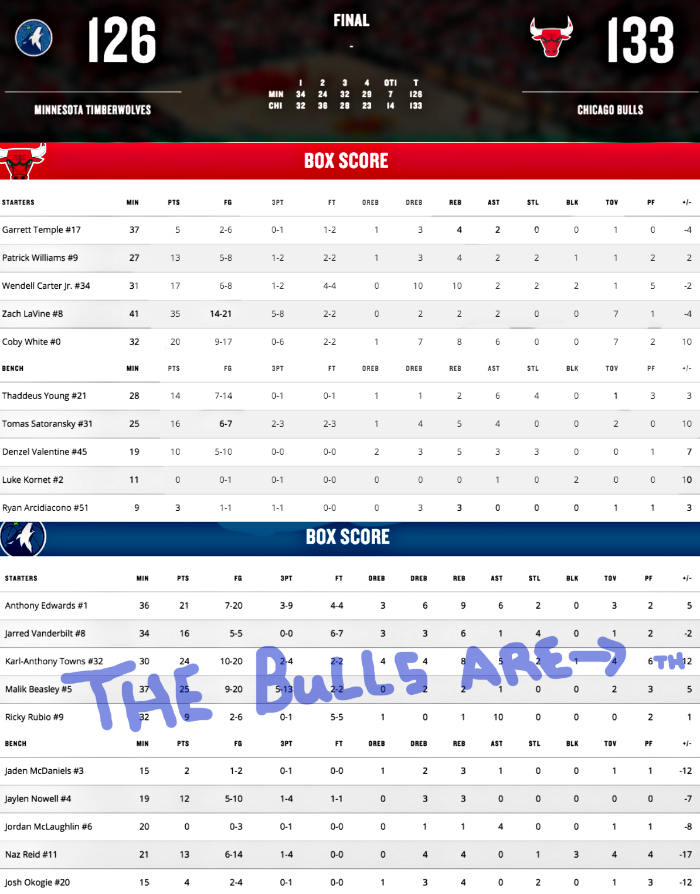