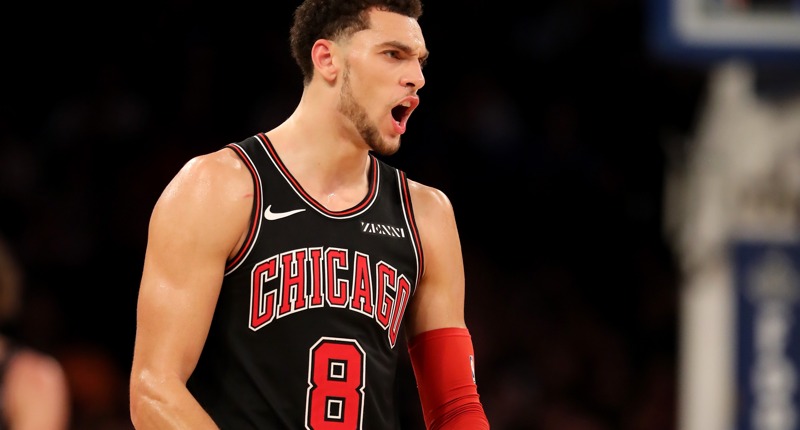 I can finally rest. After weeks of pumping endless Zach LaVine All-Star content, the Bulls guard was finally given his first nod on Tuesday night. With that out of the way, we can now shift our focus permanently to the bigger picture. We can finally focus more on the supporting cast and the major decisions that this organization will inevitably have to make as this season stretches on …

Zach LaVine speaks with the media after being named an NBA All-Star for the first time! https://t.co/Y32Zlez6MI

Call him #AllStarLavine…. Congrats to my brother @ZachLaVine …. Love bro

Ever since I got to Chicago I knew this man was an allstar. About damn time 💪🏾💪🏾 https://t.co/AUT8H2I1ld

Let’s get it @ZachLaVine !!! So happy for such a great dude and hard worker. He deserves this!

Screenshot from @ZachLaVine’s pre-draft. At time, he was projected 29th pick & people questioned his decision to enter draft. What they didn’t know was how hard he worked & how determined he was to be special. Told him I’d post this the day he was named an All-Star. Congrats bro! pic.twitter.com/8ROJ9HszoF

•   Damn. Doesn’t it just feel so good? LaVine is the 18th All-Star in franchise history and the first since Jimmy Butler earned his 4th trip to the big game in 2016-17. The award for LaVine may not change the Bulls fate immediately, but to say this doesn’t add an entirely new layer to LaVine’s Bulls’ future would simply be a lie. As silly as the game might feel at times, and as fan-focused, the events are at All-Star Weekend, the recognition means something for an organization. LaVine has been named one of the Eastern Conference’s best players, and this All-Star achievement further emphasizes to the new front office that they could have a serious building block already on their roster. All we have seen from LaVine over the past several seasons is progress, and now with an increasingly sound infrastructure around him, we are seeing an All-Star caliber player. You don’t let a player on that trajectory walk. Simple as that.

•   As I’ve said before, it’s hard not to look back at how the Bulls handled the Jimmy Butler situation and see an opportunity to rewrite history. I know the comparison is far from perfect, especially since the decision ultimately landed you another All-Star, but this franchise has seen what can happen when you decide not to pay a rising star. The organization plunged headfirst into a pile of atrocious basketball. They lost practically all relevancy around the league, and thus became an afterthought for any other star on the move. Players like LaVine – a.k.a. All-Stars – just don’t come around too often (it’s been five years, people). Is he the No. 1 player on a championship-caliber team? No. But can he play a pivotal role in helping the franchise (1) regain national attention and (2) play more competitive basketball? Yes, and that’s exactly what we are seeing happen right now. With that All-Star nod now in place, I just don’t see a future for this team that doesn’t include LaVine. The guy is a pice.

•   An All-Star one day, and unveiling your first pair of shoes the next. What a dope week for Zach.

Zach LaVine is now a 1st time #NBAAllStar and also just had his first @adidasHoops launch in China — the “LaVine Airlines” BYW 2s.

•   About five minutes after LaVine was named an All-Star, I received several texts that said something along the lines of “so … he’s got to the dunk contest now, right?” Look, I would love for him to brush off the two trampolines attached to his body as much as the next guy, but I think it’s time to let all of that go. LaVine has wanted to prove he was more of a dunker for years, and I don’t think he is going to muddy up his first true All-Star nod by resorting to the classics. Also, like he said in his media availability last night, he wants to save his legs. With the Bulls in the playoff picture, I’m more than cool with that.

Zach LaVine said “he probably won’t do the dunk contest.” May do 3-point if asked.

•   Speaking of the playoff picture, the Bulls could move up to the No. 7 seed tonight with a win over the Timberwolves. The team has had issues playing down to opponents in the past, but their ability to blowout an 11-18 Rockets team like they were supposed to be was a pleasant surprise. Consistency is key, though, and tonight is another great opportunity to show fans that this team’s mentality has truly changed for the better.

The Mentality is Changing Inside the Bulls Organization, But Don’t Take My Word For It …https://t.co/gfDQ2PlbW0