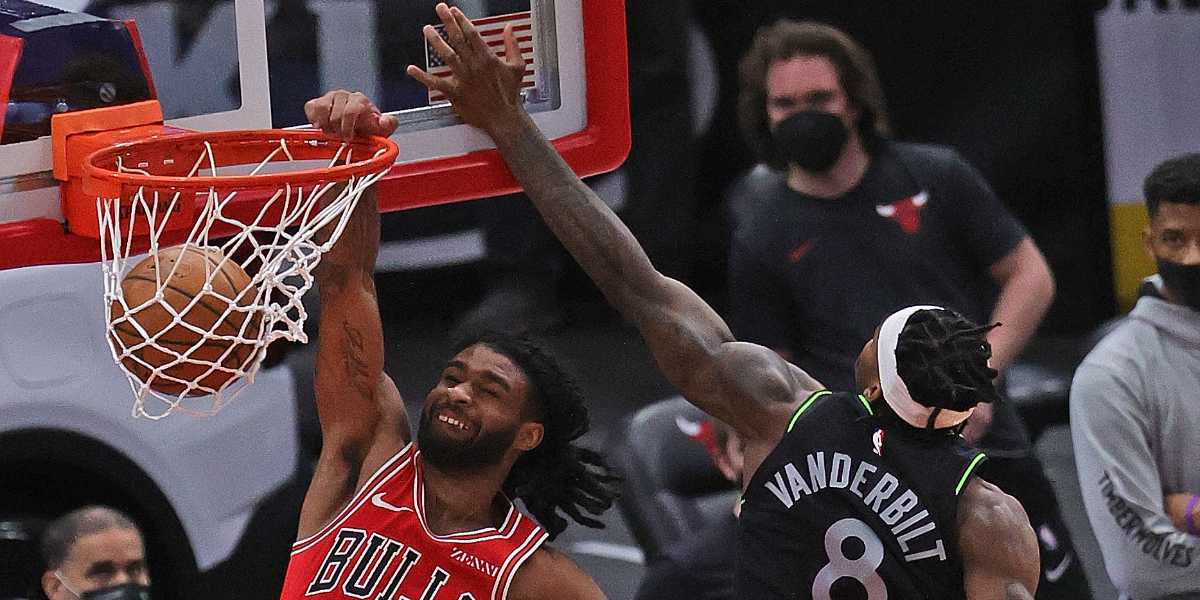 Look, I don’t want to splash this cold water on you, but I care about you, okay? I just don’t want you to get hurt.

[pulls string, bucket tips over, cold water lands all over you, I shove some extra ice down your shirt and pants]

•   Only two games separate the No. 4-11 seeds in the Eastern Conference. The Bulls wrap up their first-half schedule with matchups against the Suns (20-11), the Raptors (16-17), and the Nuggets (17-14) before tipping off the 11th-toughest second-half schedule in the NBA on March 11th. In other words, while this team may currently sit 6th in the Eastern Conference, that can change faster than Coby White in transition.

•   I’m not saying we shouldn’t enjoy or acknowledge the Bulls 8-5 February. It’s just easy to feel some drunken courage when the Bulls first All-Star since 2016 is named in the midst of a three-game winning streak and journey up the Eastern Conference standings. We are certainly watching a much-improved team, but they are still one of the youngest squads in the league and very much learning how to play a more consistent brand of basketball. We should all keep that in mind as they go up and (more importantly) down the standings.

•   Moving on … Where the hell is Lauri Markkanen, bruh? The Bulls fourth-year forward has been on the sideline with a shoulder injury since February 6th. The team originally gave The Finnisher a timetable of 2-4 weeks, so it isn’t necessarily shocking that he isn’t back on the court yet (it has been just under 3 weeks), but it’s certainly frustrating that he appears to be progressing on the backend of that timeframe. According to head coach Billy Donovan, Markkanen is “highly unlikely” to see the floor before the All-Star break.

Billy Donovan said his feeling is it’s “highly unlikely” Lauri Markkanen will return before All-Star break. Still no contact. Not impossible, but says Bulls need to be careful with re-injury risk

•   All things considered, I’m fine with them taking the extra cautious approach here. The team wants to make sure he misses no additional time upon his return to ensure they can evaluate him as much as possible before this offseason. Averaging 19.1 points and 6.1 rebounds on 51.4 shooting from the field and 39.6 percent from behind the arc has given this front office something to be excited about. However, the organization needs to know whether or not this level of play is his new floor before deciding how much money to offer.

•   If we’re being honest, I think the Bulls success during this stretch without Markkanen could work against him. If the team can play this well without him (7-3 over the past 10 games), then the front office could very well feel more comfortable letting him walk in RFA if the price tag is too high. Not to mention, could this recent success in his absence impact what the organization does if a team calls at the deadline? I think it’s something we have to think about.

•   The end of regulation last night was absolutely bogus. The refs called Coby White’s intentional foul on Ricky Rubio in the act of shooting, which sent the veteran point guard to the line to force OT. Those watching at home and on the broadcast could tell that White fouled Rubio on the floor. And even if he did foul on an upward motion, Rubio looked like he was trying to pass the ball, not shoot. White didn’t shy away from talking about it after the game, and he even said one ref (annoyingly) called it correctly: “One ref clearly said, ‘I have him on the pass, I don’t have him on the shot.’ Another ref said, ‘I have him on the shot,’ and then I look up and he’s shooting three free throws … He came out of the overtime huddle smiling because he knew what happened.”

LIVE: Coby White talks with the media after a strong overtime performance in tonight’s win against the Timberwolves. https://t.co/r664iBlvk6

•   If you got the time, I recommend watching White’s full postgame presser. Not only was he patient about the blown call, but he perfectly represented the Bulls new “stay hungry” mentality. Oh, and he also said that he wishes he could go to the All-Star Game to troll Zach LaVine with a cardboard cutout of an embarrassing photo. Good stuff.

He has tied Charles Barkley (Dec. 1990) and James Harden (Dec. 2019) for the most such games in a calendar month since the ABA-NBA merger. pic.twitter.com/ICWG8rEDQ7

•   The early returns for the Bulls this season are pretty positive. The team currently sits in the playoff picture and one game under .500. Plus, they finally have their first All-Star since Jimmy Butler. With that said, we still don’t know how this progress is being interpreted behind the scenes or what the organization hopes will come from it. Does Karnisovas feel more inclined to build around pieces already in-house? Or does he view any progress now as means to an end in the trade market? How they handle the Thaddeus Young situation could help answer those questions.

So … League Executives See a Crapload of Trade Value in Thaddeus Younghttps://t.co/APp8VWurtR