Up 58-46 at halftime, it was clear the Bulls came to play tonight against the Western Conference’s 4th-place team. They played tight defense throughout the first half and gave the wildly efficient Suns offense a hard time along the perimeter, holding them to just 1-10 shooting from downtown as they walked into the locker room.

Unfortunately, the second half told a different story. After Luke Kornet got possessed by Steph Curry for about two minutes, sinking three-straight 3’s, the Bulls began to stumble. The Suns went on an 11-4 run in the final 2:55 off the 3rd quarter and the hot shooting didn’t stop there. They went on to outscore the Bulls 32-16 in the final frame, making easy bucket after easy bucket and putting their 7th-ranked defense on full display. The Bulls coughed the ball up an atrocious 10 times in the quarter, making the Suns comeback effort that much easier. At the end of the night, 24 points off 17 total Bulls turnovers went in the books. Turn the ball over that much, especially in the 4th quarter, and you’re going to lose.

Look, it is what it is. While I’m extremely disappointed in this team’s 4th quarter, I’m encouraged by the fact that they hung with this team for the majority of the game. The Bulls still demonstrated a newfound ability to start with energy and play to an improved standard. The Suns are a legitimate Western Conference Finals contender in my eyes, and as the game went on tonight, they demonstrated why.

Time to shake off the loss, take away some positives, and look toward the Raptors. 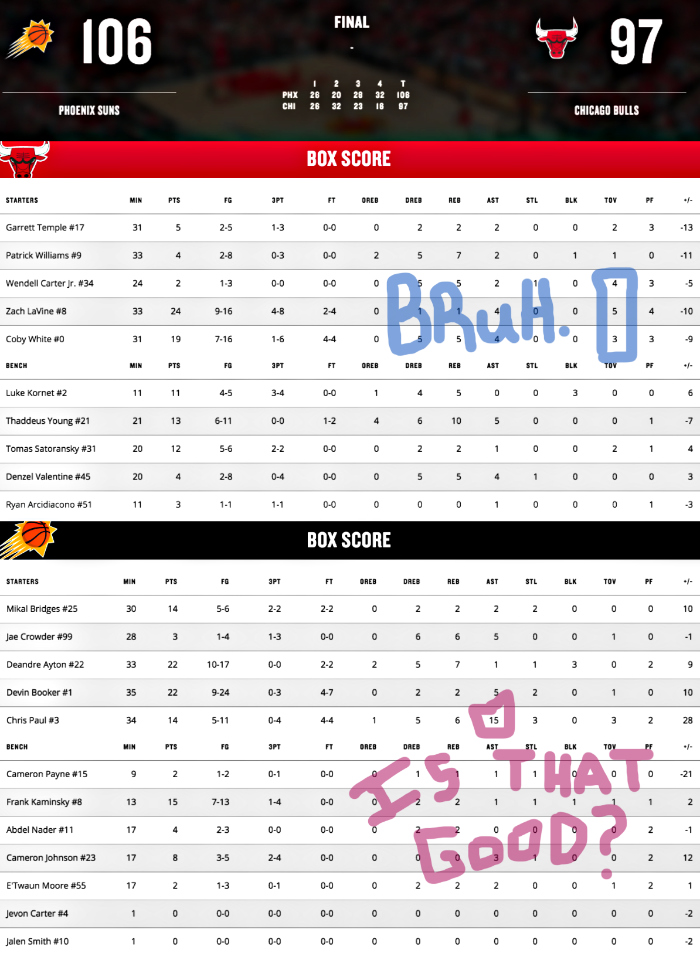