Do the Chicago Bulls (16-18) know it’s okay to win a game without giving us a heart attack? No? Well, someone should tell them.

After holding a lead as large as 19, the Bulls found themselves in their 22nd clutch game of the season (a contest that is within 5 points with under 5 minutes to go). The Pelicans outscored them 45-32 in the 4th quarter and brought the game down to as close as two points in the final minute. Chicago fouled two 3-point shooters with 35 seconds left in the game to give the Pelicans extra life, but by the grace of the basketball gods, they were able to knock down their free throws and end the first half of the season with a W.

Fourth-quarter mishaps aside (we’ve already talked about that too much today ((see post)), that was a pretty damn encouraging way to head into the All-Star break. The Bulls came out firing on all cylinders and looked like the far superior team on both ends for about three full quarters. They outrebounded the league’s 4th-best rebounding team by 10, and they managed 18 points off 11 Pelicans turnovers. Even better, they somehow found a way to beat New Orleans at its own game, outscoring them 64-54 in the paint (the Pels score the 5th-most PPG in the paint and allow the 9th fewest down low each night).

Wendell Carter Jr. and Patrick Williams both deserve specialized shoutout for limiting the imposing Pelicans frontcourt. The rookie had several tremendous possessions guarding the first-time All-Star Zion Williamson, while Carter Jr. was basically single-handedly in charge of the Bulls rebounding success. The third-year big man hauled in 15 boards (7 offensive), and finished the night with a +22 despite his 3-11 shooting night.

All in all, that was a solid team effort, and I can sleep peacefully over this All-Star break. Hooray!

See ya March 11th (jk, I’ll see ya tomorrow because the Bulls are my life and the grind never stops). 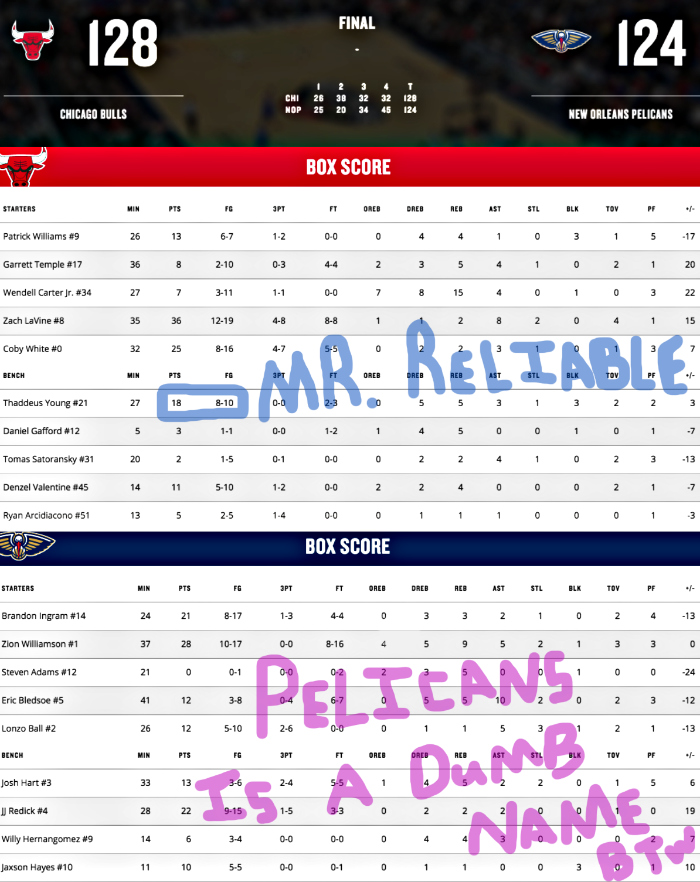