Markkanen and LaVine Seem to Be Working on Their Chemistry, But Will it be Enough? Skip to content 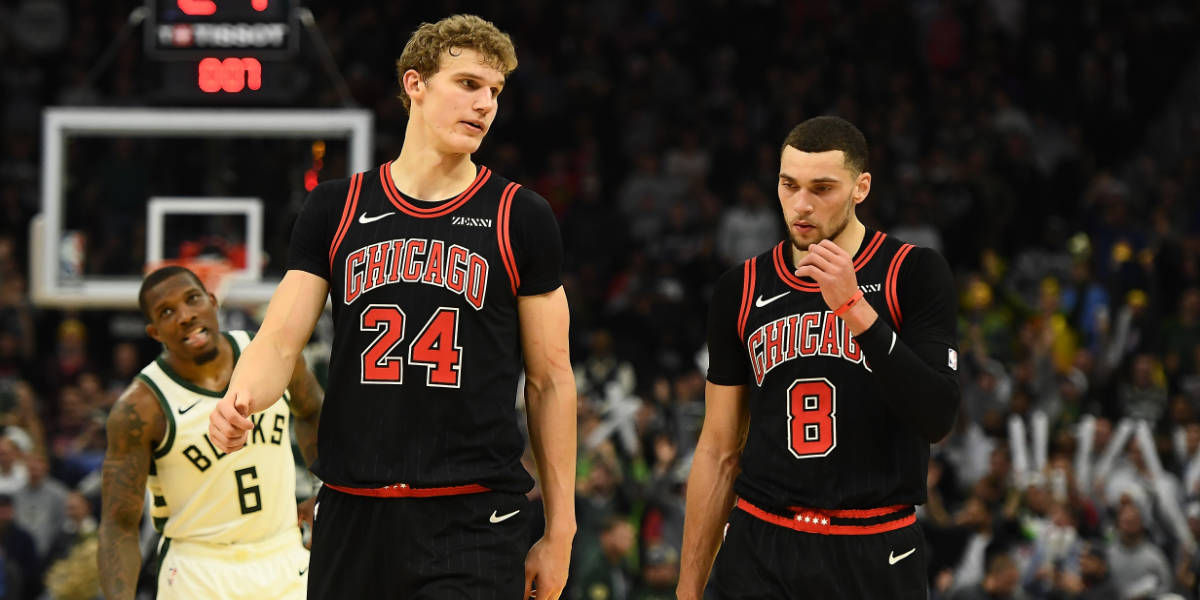 Spongebob and Patrick. Peanut butter and jelly. Steak and Potatoes. Going to bed and crying. All are famous duos (The last one is just me?), and that is exactly what the Chicago Bulls hoped Zach LaVine and Lauri Markkanen would become back in 2017.

Chicago acquired both youngsters in the Jimmy Butler trade, and considerable effort was put toward making each the face of the franchise under the past regime. However, not only did the on-court chemistry struggle to turn heads, but Markkanen also continued to face injury trouble throughout his tenure in Chicago. After three seasons, Markkanen has appeared in only 184 games. Boil that number down to games where he shared the court with LaVine and it dips to 120. Then, boil that number down even more to games where the Bulls “dynamic duo” each scored 20 points apiece, and we are looking at just 24 games.

I’d say it is fair to argue that these two have, unfortunately, not had enough time to build a rapport. However, I’d also understand anyone concerned about their long-term ability to play alongside each other. The question has been at the top of Bulls’ fans minds for years even with all the absences. When one would go off, the other would disappear. When one would be on the injury report, the other would explode. We even saw this happen just before Markkanen’s latest stint on the sideline. LaVine scored a season-low 10 points while Markkanen blew up for 29 against the Dallas Mavericks on January 17th.

With that said, we have to give credit where credit is due. Markkanen’s 14 games played this season have provided some confidence in their ability to co-exist. Already five times this season, the two have scored 20+ points in the same game while both have simply looked more comfortable filling their respective roles in Billy Donovan’s motion-based offense.

Speaking of which, the Bulls head coach was asked on 670 The Score’s Mully & Haugh Show about whether or not the Bulls can get a more consistent product from a LaVine-Markkanen-led team. I found his answer rather interesting, as he expressed plenty of belief in the tandem while also making it sound like it will take a lot of work.

“I told Zach this because he and Lauri were oftentimes in two-man games together, and this was earlier in the year, I said to him, “‘how much have you really gone to Lauri and you guys have worked on pick-and-rolls together?’ And he’s likes, ‘you know, really not a lot.’ And I said, ‘that’s part of the leadership part.’ I said you should touch three to four guys every day in that gym. I said because if you and Lauri are going to be in 15 pick and rolls together, you guys need to be on the same page – not in the game, but away from the game. I think it’s been really good. Zach’s done a great job, so has Lauri. I don’t have any concerns about those guys playing together at all.”

Improvement takes more reps and more communication. I get that. However, by admitting that he had to push LaVine to go work through things with Markkanen, it kind of demonstrates that he noticed a lack of chemistry, right? I also think it’s not nothing that he centered this answer around LaVine. Clearly, the team still views him as the initiator and leader, which kind of just reaffirms the fact that they could view Markkanen as the more expendable option moving forward. I know that might feel kind of obvious considering the whole All-Star thing, but let’s remember the front office has heavily stood by Markkanen since coming aboard.

So far this season, the Markkanen and LaVine combo is posting a -12.2. While that might be on only a 14 game sample, it still goes to show how much work has to be done before these two can prove they are a truly reliable pairing. Like I said, there have been moments this season where things have looked a bit better, but this is yet another major storyline we will have to keep an eye on in the second half. Remember this isn’t the front office that put all their eggs in the LaVine-Markkanen basket, which means trying to make it work could become a far less important goal.

For more on Markkanen …