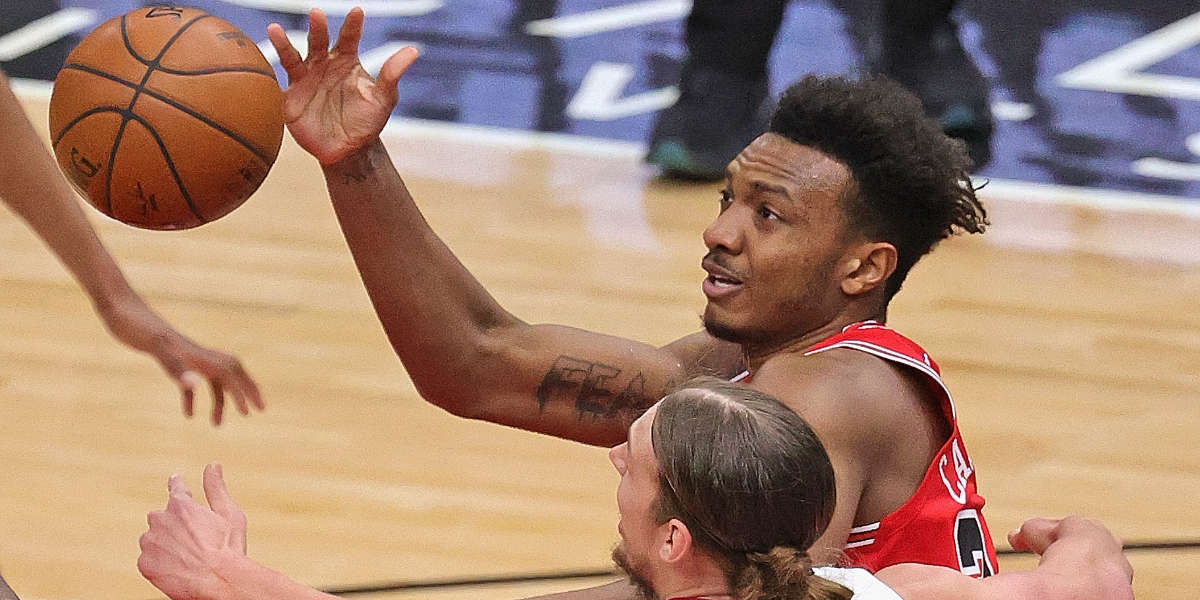 Good news: The weather is great, AND the Bulls can’t lose today!

•   Is anyone else having deja vu? While the Bulls two-straight losses to start the second half weren’t as brutal as the first and second game of the season, they were still by double-digits. Not to mention, the taste these latest games have left in my mouth might as well be worse, particularly since we’ve now seen some of the competent basketball this team is capable of playing. Like, honestly, what happened between the All-Star break and now? This Bulls team looks like they lost the identity they worked so hard to build in the first half. The physicality is gone, the chemistry is shaken, and the confidence looks shot. The efficient offense we’ve also grown used to has only shown flashes of its former self. Last night, the team tied their worst shooting performance of the season, finishing with a 37.4 percent clip from the field. What game did we see the same number? That’s right, the Bulls 125-106 loss to the Pacers in the second game of the season.

•   The Bulls shot a concerning 18-48 from the paint, including a 16-37 performance in the restricted area. And while the Miami Heat deserve some of the credit – they now hold teams to the fewest points in the paint per game – they were without their best interior defender in Bam Adebayo. On that note, let’s talk about the Bulls’ center.

•   For the second straight game, Wendell Carter Jr. failed to take advantage of a relatively favorable matchup. He only stayed on the floor for 22 minutes, and he went 1-5 with 4 points in the process. Ever since his decent matchup against Karl-Anthony Towns where he scored 17 points and 10 rebounds, Carter has slipped back into the passive offensive player we saw last season. He has now scored in single-digits over the Bulls last five games, and he has also shot an abysmal 32.2 percent from the field. And before the Wendell haters come out and scream “THIS IS HOW HE’S ALWAYS PLAYED,” let me talk about why that simply isn’t true. Prior to this five-game stretch, Carter was playing some really solid basketball. He scored in double-figures in five of his six games after returning from injury (the Bulls WON each of those five games), including two double-doubles. Carter was also shooting 60.3 percent from the field. Likewise, before his 11-game stint on the sideline, Carter scored in double-figures in 10 of his previous 11 games and also averaged 8.3 rebounds per game (2.4 of which were offensive). He was playing like a decent starting center.

•   Now, however, the Carter concerns have become increasingly justified. The Bulls system calls for him to be more active on the offensive end, but he appears to be continuously passing up opportunities to attack the rim or shoot. Why? The question has never really been about talent. Carter may be under-sized, but he has always possessed the IQ, footwork, and athleticism to be an impactful player on that end of the floor. Again, even Donovan’s offense is built to cater to Carter’s offensive development.

•   Honestly, in my opinion, a lot of this just comes down to confidence. The big man’s postgame press conference last night was super concerning, as he sat in front of reporters and looked completely dejected.

•   I don’t expect Carter to be going anywhere at the trade deadline, but I am really curious to see how the new front office approaches him moving forward. He and Markkanen are probably the two players Arturas Karnisovas and Marc Eversley are devoting most of their “evaluation” to this season. I’ve written it before, but I’m starting to think even more that one of these two will be the first out of the young core.

•   Speaking of the roster changes, head coach Billy Donovan reaffirmed the fluidity of the Bulls deadline situation after last night’s game: “I’m sure for all people in front offices now as you move closer to that deadline date, there is going to be a lot of talks that are going on. I think as things get more serious or closer, I’m sure that we [Donovan and the front office] will be able to talk about those things. But it’s like a lot of things right now, it’s all “what ifs,” in my opinion. But I would say this, Arturas and Marc are going to look to evaluate how they can help the Chicago Bulls. I’m very very confident of that and believe in that.”

•   The Bulls still aren’t tipping their hand, but that means that the possibility of making moves could very well be on the table, especially if things continue to spiral.