Getting Back on Track, the Smart Spurs, LaVine's Aggressive Night, Thad the Great, and Other Bulls Bullets Skip to content 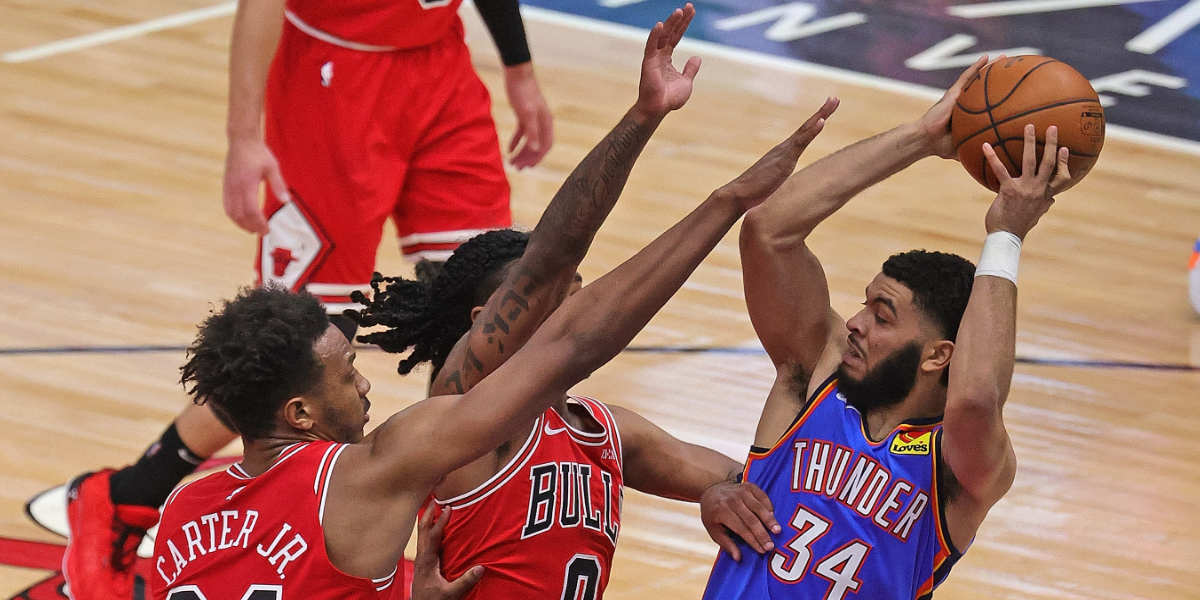 Trust me, I know what it’s like to sit there and watch a dysfunctional front office run a team into the ground. I can also tell you that, eventually, it will get so bad that ownership can’t take the public outcry. I mean, sure, sometimes it takes 20 years for said ownership to actually do something about it … but better late than never!

Anyway, if you need a new front office to believe in, Arturas Karnisovas and Marc Eversley are here for you. Come aboard.

•   Nothing is for certain nine days out from the NBA trade deadline, but the chance of the Bulls “selling” on March 25th has gone down significantly. A half-game back from the No. 8 seed and one game back from the No. 5 seed, the Eastern Conference is still a clusteryouknowwhat. And that means the Bulls have a very legitimate shot to crack the postseason for the first time since 2017. Not to mention, even though it may come against two injury-plagued opponents, the Bulls look to be back on a somewhat promising track after two questionable games to start the second half.

•   Speaking of which, the Bulls have such a real shot at the playoffs that executives are starting to believe, if anything, they could seek improvements at the deadline.

Report: League Executives Believe the Bulls Could Be Buyers at the Trade Deadlinehttps://t.co/VBTrnB59WK

•   Tonight should be telling, though. The San Antonio Spurs may not be a top-seeded playoff team, but they do sit at 20-16 and 7th in the Western Conference. They are an incredibly well-coached and fundamentally sound team (per usual). They commit the fewest turnovers per game, and they have the league’s 8th-ranked defense. No, they aren’t unbeatable, but they just aren’t going to beat themselves – and that is bad news for a Bulls team that has a knack for doing the exact opposite.

•   I’m not yet convinced that the Bulls are a much more careful basketball team, but the past two games have inspired hope. With the new starting lineup, the team has committed just 11 turnovers in each of the past two games. Relatedly, they have forced their opponents into 12 and 17 turnovers, respectively. Let’s see if they can stay on this track tonight against a more fundamentally formidable opponent.

•   Now, while the Spurs offer a better challenge than the Bulls have seen the past two games, they will be yet ANOTHER shorthanded opponent. Not only is LaMarcus Aldridge no longer suiting up for the team as they seek a trade, but DeMar DeRozan will miss his fourth straight game due to personal reasons. The four-time All-Star has averaged 20 points with 7.3 assists per game this season as the Spurs go-to man, but the team has been able to make up for his absence thus far with a 2-1 record since returning from the All-Star break.

•   The Athletic’s Sam Vecenie doesn’t believe the Bulls will move on from other Thaddeus Young or Garrett Temple this trade season, but he does still view them as one of the most valuable trade chips as the deadline looms. Young ranks 5th and Temple ranks 16th in his “Trade Deadline Big Board.”

With @sethpartnow and @dannyleroux, the NBA Trade Deadline Big Board. A look at 29 names that, for various reasons are interesting (or not particularly interesting) NBA trade targets at the deadline here: https://t.co/0apqYRWHl7

•   Tomas Satoransky has dished out 7 assists in each of his two games as a starter, and that has made Zach LaVine a happy camper.

Wrote about the on-court chemistry between the Bulls new starting backcourt, Tomas Satoransky and Zach LaVine: “the best thing to do for him is to get him easy points that he doesn’t need to work that much for” https://t.co/PZje9O6AtB

•   Zach is just silly, right? The man dropped 40 points with 2:28 left to go in the 3rd quarter. His effortless ability to score at all three levels is truly special to watch, and it’s amazing that he continues to find ways to make his 7th season in the league that much more impressive.

Zach LaVine was in his BAG.

•   Also, let’s not forget to shoutout his continued effort on the defensive end. Head coach Billy Donovan called him out last night for his responsible defense on Shai Gilgeous-Alexander, who scored 33 points the first time these two teams met back in January. This time around, he scored a much more mundane 21 points, which snapped his streak of three games with 30+ points. NBA.com’s matchup stats have Gilgeous-Alexander scoring just 2 points (1-5) on LaVine in the 11:16 minutes the two were matched up on the court. That’s promising.

Billy Donovan credited Zach LaVine for playing so aggressively offensively and responsibly defensively while guarding SGA that he asked for breather early in 3rd. Said it's a sign of growth for LaVine.

•   As much as I think it would be awesome to see LaVine make an All-NBA team, let’s not get ahead of ourselves (yet).

A friendly reminder that Zach LaVine is super max eligible if he is named All-NBA this season.

It will be tough sledding to earn a spot in a loaded pool of guards but LaVine is now up to 40 points on an efficient 15-20 from the field.

Try to tell us Thadgic isn’t one of the all-time greats pic.twitter.com/u1lprwlCzi

•   Anyway, watch this for the rest of the day.