With 7:27 seconds to go in the 4th quarter, the Chicago Bulls were up 14 points on the Denver Nuggets.

Almost exactly the same story that we saw on Wednesday night played out on Friday. The Bulls looked like the better team on the court for 3 quarters before absolutely crumbling in the final frame. When Coby White fouled a 3-point shooter – which was ultimately deemed a flagrant due to him coming down in the player’s landing zone – every ounce of momentum the Bulls had went out the window. It’s like even though they were up double-digits, they knew in that moment they were going to lose. They knew at that moment, they were going to flat-out give up.

After White’s foul, the Nuggets finished the 4th quarter on a 27-10 run, capping it all off on a corner 3 with .04 seconds to go to send the game to overtime. All the Bulls had to do was guard the perimeter … instead, they double-teamed Nikola Jokic underneath the basket. The decision-making was mystifying.

Jokic and Murray scored 38 points in the 4th quarter and overtime, (h/t Jeff Mangurten) which was equal to the number of points the entire Bulls team scored in that stretch. They stepped up to the plate when the going got tough, while every single Bulls decided to just chill in the dugout.

Anyway, I’m tired, angry, and kinda hungry, so I’ll leave you with this: Moves have to be made at the deadline. This roster has had their chance to prove themselves to the new front office. Some good things have happened, but enough to continue to keep things the same? No. 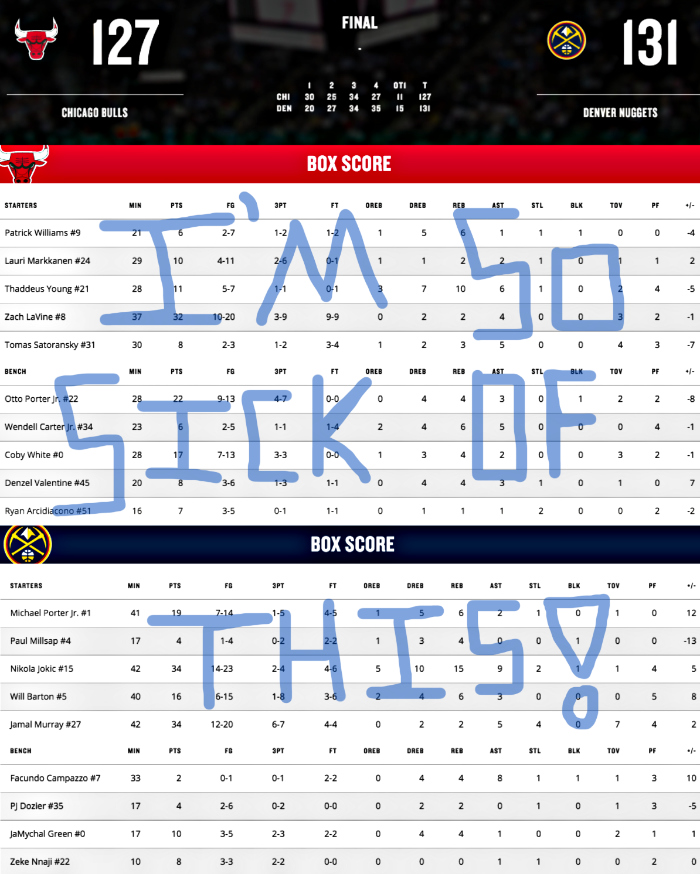