Look, it wasn’t the post-trade-deadline start we wanted, but I think it’s one we can live with.

The Chicago Bulls added five new players just two days ago, and none of those players were able to practice with the team on Friday evening. And while the starting lineup might still include four guys that have been here all season, they are still welcoming in a 2x All-Star. I know we want the team to look better – and they will – but it isn’t going to happen overnight (literally). Vucevic will be a fundamental part of the Bulls offense, but it’s hard to know exactly how to get him the ball when you’ve literally never shared the court. Tonight was a learning experience for all … including Billy Donovan.

I didn’t agree with all of the head coach’s decisions in this game, but I’m also not going to worry about them. This is a learning process for everyone, and I expect he got a much better idea of how he wants to run things moving forward. One change I believe will be made by the next game is less Denzel Valentine and more Troy Brown Jr. I’m not necessarily shocked Donovan went to Valentine early-on (the Bulls got down big and he probably expected a more familiar face could help right the ship) but when he finally turned to Brown the energy of the game changed. He finished with 8 points, 3 rebounds, and a +12 in 14 minutes of action.

In fact, all of the new guys played a massive role in the Bulls’ ability to bring the Spurs 36-point lead down to single-digits (Brown was +12, Aminu was +10, and Green was +5). I don’t know about you, but I think that’s a good sign.

Bulls close the 3rd on a 13-2 run, with Al-Farouq Aminu and Troy Brown scoring in that time.

They're down 9 with 5 minutes left.

Don’t overreact. Don’t panic. The upcoming schedule is tough, but the Bulls will look better (*knocks on wood aggressively). Yes, there is a sense of urgency to get things right with the playoffs looming, but I think we can give them at least one game.

We’ll talk more about it tomorrow.

Nikola Vučević: “You could tell we were stagnant and hesitating at times. That just comes from us not playing together yet.” 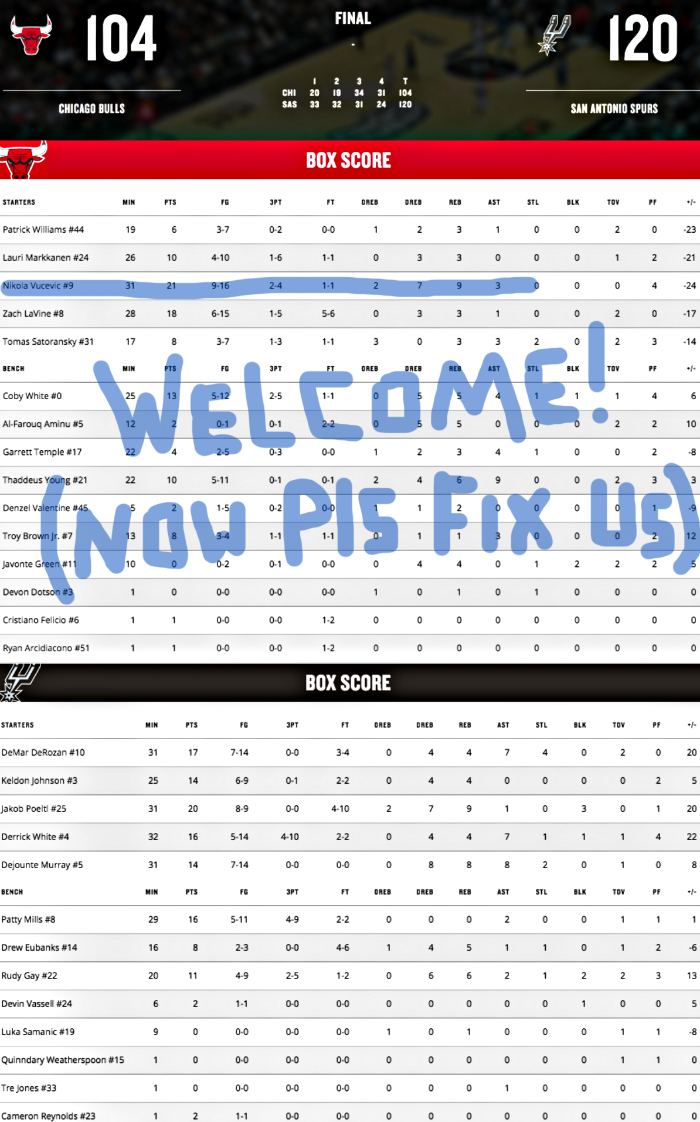