I give credit where credit it is due, and despite a fifth-straight loss, the Chicago Bulls deserve a ton of credit tonight.

Without Zach LaVine, Coby White, and Garrett Temple on the floor, the Bulls managed to keep things within striking distance against a true Finals contender. The Phoenix Suns once held a lead as large as 16, but the Bulls played completely unaffected and found themselves within just 3-points with under a minute to go. A big reason for that is their noticeably more aggressive and careful play on both sides of the ball. Lauri Markkanen (surprisingly) helped set the tone with a 10-point first-quarter performance, ultimately finishing with his second double-double of the season.

Meanwhile, Nikola Vucevic and Daniel Theis continued to show just how productive the Bulls revamped frontcourt can be. Vooch finished with his first double-double as a Bull (24pts, 10reb) and Theis recorded two big blocks and hauled in five rebounds. Oh, and the two players also combined for just three personal fouls and one turnover.

I’m not necessarily saying the Bulls should walk away with a moral victory, but they should feel a lot better than they did a couple of nights ago. The Suns have the league’s second-best record and net rating, so going toe-to-toe with arguably your best player on the sideline is worth a tip of the cap. The hope now is that the Bulls recently revised roster can use this performance as a much-needed chemistry stepping stone. Jazz and Nets (dear lord) up next. 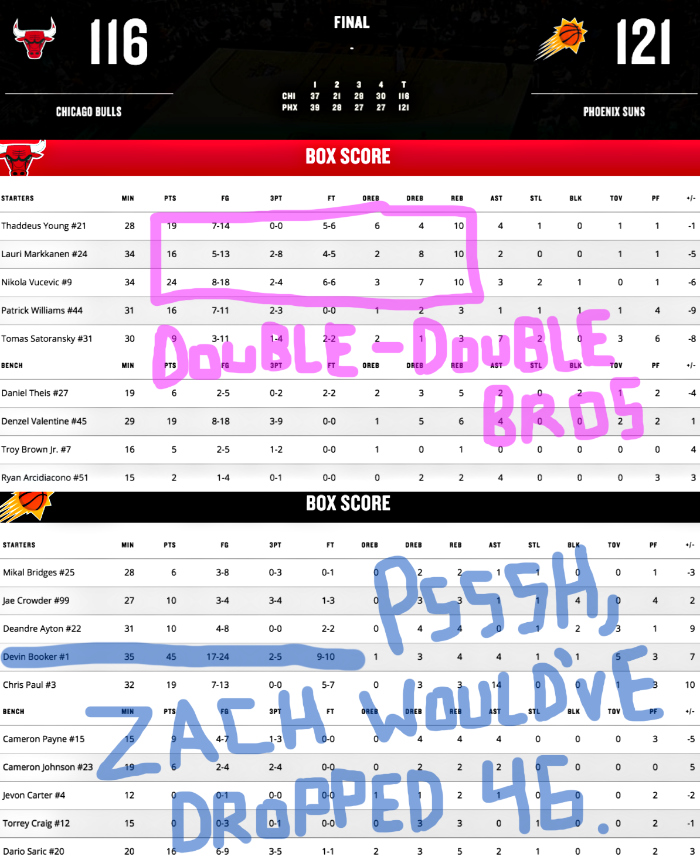