The Chicago Bulls are in the midst of their longest losing streak of the season, which is a tough pill to swallow for any team that has postseason aspirations. At the same time, it’s not as if this stretch wasn’t somewhat expected. The team saw significant roster turnover on March 25th, and they are now trying to integrate their new talent during one of the tougher sections on their second-half schedule. Wins would be ideal, but progress is ultimately what we need to see right now, and (fortunately) that is what the Bulls have shown in their last two games.

One game after giving the Western Conference’s second-best team, the Phoenix Suns, a 4th quarter scare, the Bulls played a smart and gutsy full 48 minutes against the Utah Jazz. They committed just six turnovers (Jazz had 10) and outscored the Jazz by a dominant 68-40 in the paint. From start to finish, the Bulls looked like a legitimately competitive team, one that could very well be worth a playoff spot.

Zach LaVine and Nikola Vucevic also continued to show glimpses of a strong offensive tandem. Things weren’t perfect, but the two combined for 39 points, 13 rebounds, and 7 assists. LaVine didn’t look entirely back to his former self – shooting just 10-22 from the field and 2-8 from downtown – but he did look to be significantly less restricted by his banged-up ankle.

Anyway, it was another step in the right direction for the new Chicago Bulls … but it was still a loss. Let’s just hope they can build on these strong efforts against some of the league’s best squad and begin to string together some wins. 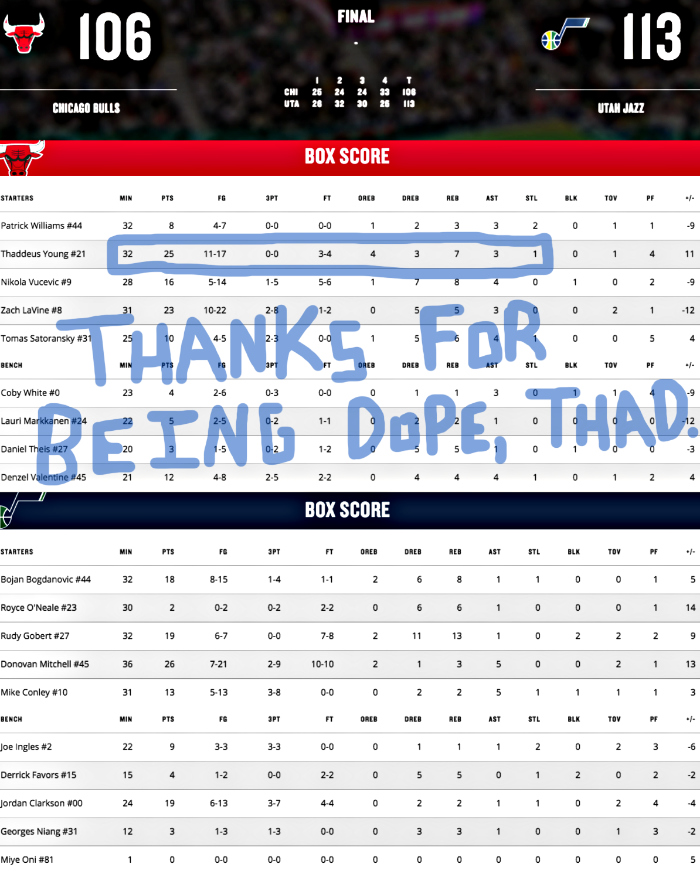