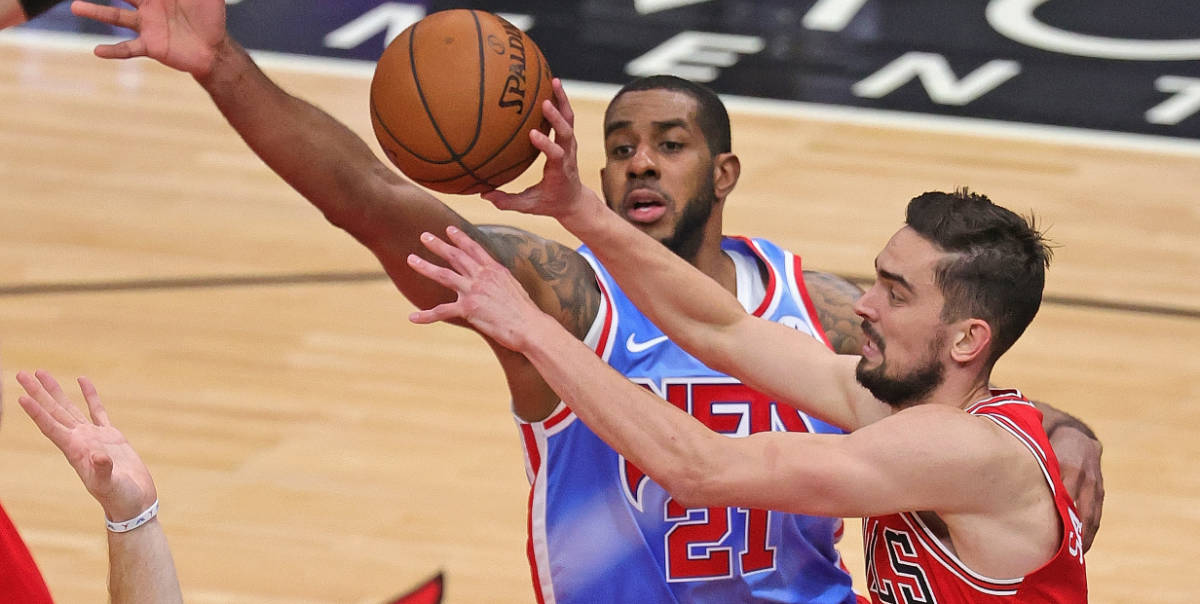 I’d like to place an order for more of what we saw yesterday, please.

Oh, can you sprinkle in some extra Vooch? I like that stuff.

Took care of business against the Nets 💪@ConstellationEG | #BullsNation pic.twitter.com/PCiL3SFKi7

•   The Bulls snapped their six-game losing streak in style on Easter Sunday, beautifully blending the strides they showed in their previous two competitive efforts against the Suns and Jazz. They recorded single-digit turnovers for the third-straight game (the first time they’ve done that all season) and controlled the pace of play through newfound physicality and post play. The team’s 22 3-point attempts marked a season-low, while their 30 free-throw attempts tied their fourth-highest mark of the season. From start to finish it was the most comfortable this team looked with Nikola Vucevic on the court, and while we should factor in that the Nets are not particularly known for their defense (25th in the league), this was still a game where it looked like something finally clicked for the revamped Bulls.

Happy to get my first W with the team! Great effort today! Let’s build on it! #BullsNation pic.twitter.com/cQAS2NEBc5

•   Zach LaVine played like Zach LaVine for the first time since the trade deadline, dropping 25 points on 8-17 shooting. He still struggled to land his 3-ball (shooting just 20 percent over his last four games), but he made up for it with a season-high in free throw attempts (12). It was one of those games where LaVine led by example. The team opened the game lackadaisical, failing to recognize their clear advantage in speed and athletism against a frontcourt duo of Blake Griffin and LaMarcus Aldridge. LaVine ended the first quarter with a cross-up on Jeff Green for the easy layup. He then started the 2nd quarter with a quick trip to the charity stripe. The Bulls then outscored the Nets 32-18 in the second quarter, shooting 16 of their 30 free throw attempts after shooting just three in the first half. Maybe I’m overthinking it, but I can’t help but think LaVine’s aggressive spurt made the rest of the Bulls players go, “oh yeah, we’re bigger and faster than them.”

•   Relatedly, Lauri Markkanen showed some pretty encouraging signs in his new role. The seven-footer actually played his size, as he took advantage of mismatch situations more than we’ve ever seen before. He moved Timothé Luwawu-Cabarrot like a feather on his way to an easy layup, abused Landry Shamet, and demanded the ball to score over Bruce Brown. It was a level of urgency and aggression we have failed to see from the big man time and again this season, and I wonder if potentially watching his new All-Star teammate in the post has inspired him a bit. Regardless, it’s something the Bulls want to see from him as they determine his future, and Billy Donovan praised him for his efforts after the game: “I think that’s what going to have to happen, especially in the small forward spot where he is setting some screen and he is doing some of those things, he’s getting switched. I thought he did a really nice job going inside, and he is more than capable of doing that. I thought he was physical too with his post moves which was encouraging to see, it wasn’t him necessarily him just trying to shoot the ball over a small defender.”

•   FWIW: I’m not sure how to read into anything Markkanen-related right now. All signs point to the marriage between him and the Bulls coming to an end this offseason, but I guess minds can change. And, obviously, the better he plays now, the better the Bulls postseason chances.

•   Tomas Satoransky showed up big last night. The guard finished with a season-high 11 assists to pair with his season-high 19 points. He and Young always showed a promising connection this season, and we are starting to see something similar between savvy vets like Daniel Theis and Vooch. The Bulls will still definitely need to address the long-term point guard position this offseason, but Satoransky feels like the right high-IQ, experienced player to help bring this new roster together.

•   Wendell Carter Jr. is looking comfortable in his new home, by the way. The big man has scored in double-digits in four-straight games, and he has recorded a double-double in two of those. He is also shooting nearly 60 percent from the field and getting to the free-throw line four times per game over that stretch. The Bulls will see him for the first time as an opponent on April 14th.

This version of WCJ is going to be one hell of a big for a LOOOONG time. The passing on the short roll, the shooting, the strength around the rim & the tenacity. I’ve loved his performance tonight.