In losses to the Suns and Jazz, the Chicago Bulls showed gradual and promising improvements. The offense started to figure out how to properly use Nikola Vucevic, while the defense started to show a more consistently physical effort. Then, against the Brooklyn Nets on Sunday, the Bulls put everything together for arguably one of their best wins of the season. It was a breath of fresh air.

Well, if Sunday was a breath of fresh air, then Tuesday was like inhaling the first chunk of oxygen on a brand new planet. The Indiana Pacers may have been without Malcolm Brogdon and Domantas Sabonis, but the Bulls didn’t go into the game with that mindset. Unlike previous lackluster performances against lesser or depleted teams before the deadline (think Cavaliers, Spurs, Magic, and OKC), the Bulls avoided playing down to their opponent. They instead came out just the way they did in the games where they gave the Suns and Jazz a scare, and *shocker* it resulted in a completely dominant 113-97 victory.

For the first time in a long time, Bulls fans got a real feeling of having two All-Star players on their roster. Nikola Vucevic dominated from the jump with 32 points, 17 rebounds, and 5 assists. Meanwhile, LaVine had himself an awesome all-around game with 19 points, 8 rebounds, and 6 assists. He also finished with a game-high +16.

I’m just going to drop some highlights because the whole things was beautiful:

And then Zach buries this 3. THIS DUDE IS A RIDICULOUS SCORER pic.twitter.com/Df2yPtSQ3I

We’ll talk more about the rest tomorrow but to sum it all up briefly … TBJ had another great defensive showing, Coby White looked like his old self, Patrick Williams has a career-high in steals, Lauri Markkanen might be comfortable in his new role, Donovan shortened his rotation, and the Bulls just looked freakin’ fun.

What a good way to start a winnable stretch. Bulls now 1.0 game behind the Pacers for the 9th seed. 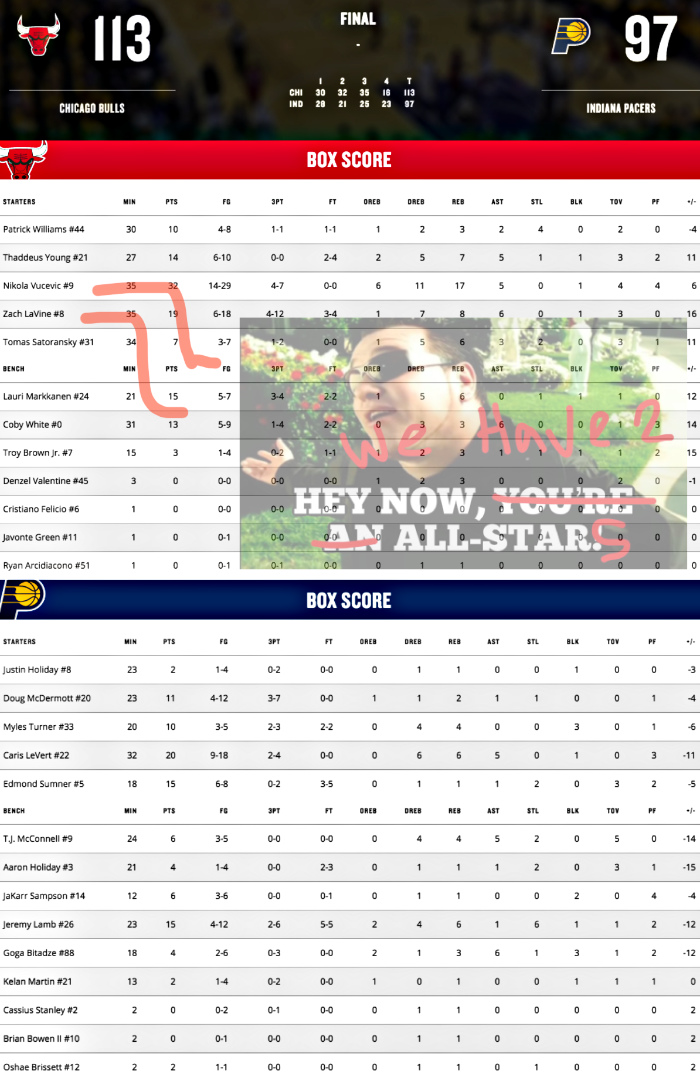 A Brutal Adjustment Period, the Starting Lineup Discussion, Sato vs. Coby, and Other Bulls Bullets