Things aren’t going to change overnight, and tonight reminded us of that.

On the verge of winning four-straight for the first time since 2017, the Chicago Bulls folded in a familiar fashion. The supporting cast failed to back up their elite players who left practically everything on the court. Zach LaVine scored a career-high 50 points with an utterly amazing 39-point first-half performance. The Bulls’ second All-Star, Nikola Vucevic, was the only other player to give his team a fighting chance with his third double-double in the Bulls’ last four games (25pts, 10reb). The fact that these two continue to show such promise is encouraging, but the fact that this team still couldn’t come away with the win is … well … somewhere between frustrating and infuriating.

On the surface, it sounds reasonable to say LaVine and Vucevic should be enough to get the job done, especially when up by 13 points at the half. But then when you glance down at the box score and see just how abysmal the rest of the team was, it’s easier to understand why the Bulls lost this game. Coby White was the only other player to score in double figures (11), while starters Thaddeus Young, Tomas Satoransky, and Patrick Williams combined for just 8 points. At the end of the day, that’s just unacceptable stuff.

I have other thoughts I can type out … but I think I’m just going to try to enjoy the rest of my Friday night. Maybe I’ll zone out and watch King Kong and Godzilla beat the crap out of each other. We’ll talk about the changes the Bulls need to make and Billy Donovan’s weird rotation decisions tomorrow in bullets. 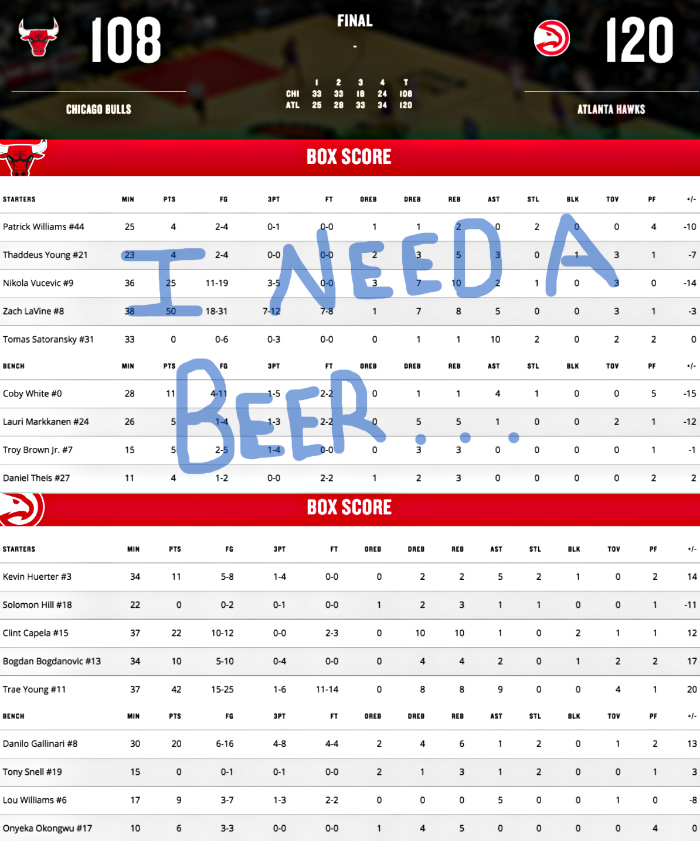