There are big wins, and then there are season-salvaging wins. Tonight could be the latter.

Time will only tell how truly important this 110-102 victory over the Miami Heat will turn out to be in the Bulls’ postseason push, but it’s kept them in the hunt for now. With the Wizards losing their first contest in eight games tonight, the Bulls have come back within just 1.0 game of reclaiming the 10th seed. The Knicks, Bucks, and Heat will fill the remainder of the week, so starting things off with this unexpected W sure is helpful.

Nikola Vucevic and Daniel Theis made the Bulls front office look genius tonight, as the frontcourt duo gave Miami all kinds of problems on both ends of the floor. Vucevic finished with 24 points and 11 rebounds, shooting 9-15 from the field and sinking four shots from downtown. Meanwhile, Theis had easily his best game as a Chicago Bull, adding 23 points with 12 rebounds, 5 assists, and 2 blocks. Vooch looked like Vooch, and Theis looked like a guy this organization has to prioritize re-signing this offseason. Together they have provided the Bulls quite an impactful and versatile one-two punch, and to both outperform an elite talent like Bam Adebayo is no easy task.

I’ll be curious to see how this win impacts the Bulls non-Zach-LaVine gameplan moving forward. They will face two similarly tough defensive opponents over the next two games, and the best recipe to success might as well be mimicking how things started tonight. The Bulls pretty much strictly worked in the halfcourt from the inside out. Feeding it to either Vooch or Theis down low to let the playmaking begin there. And when the ball did find its way along the perimeter, we saw Coby White or Thaddeus Young put it on the floor and head straight for the hoop. The more physical, interior-focused style of play is likely the reason they finally snapped their streak of sub-20 free-throw attempt games.

The run stops at 12 straight, tying the longest such streak in NBA history, with the Kings in 2018 and Philadelphia in 2012.

I should mention, the Bulls also got some help from Miami’s cold shooting from behind the arc. Duncan Robinson left mid-game, and Miami only finished 7-36(!) from downtown after going 14-37 over the weekend. 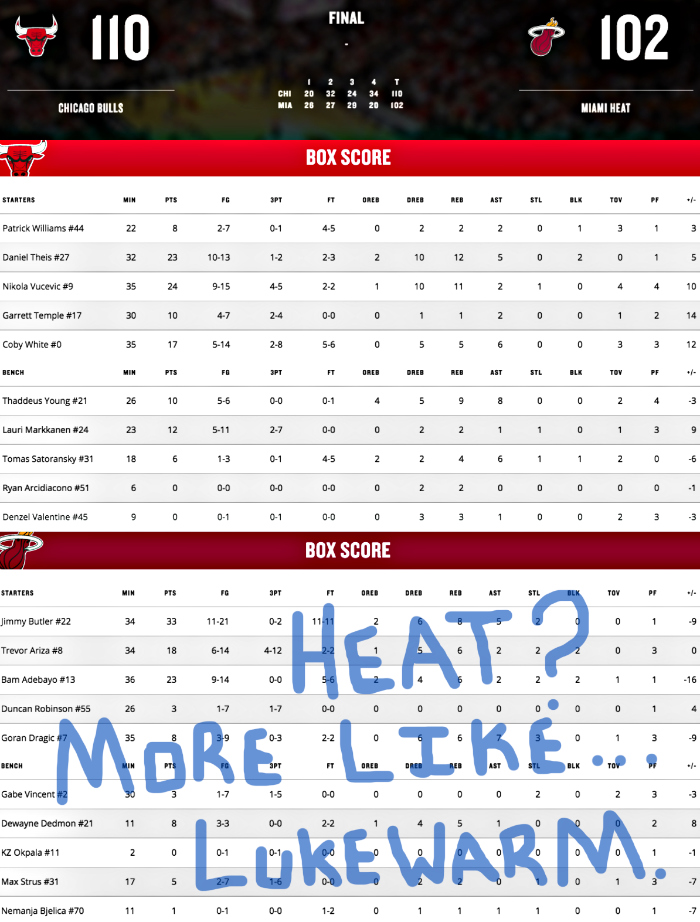