Sometimes a team just isn’t going to win. Tonight, the Bulls were that team.

Even with 2x MVP Giannis Antetokounmpo and savvy defender Donte DiVincenzo on the sideline, winning this game felt like a long shot for Chicago. Not only were the Bucks hungry for a W after a bad loss on Thursday night, but they contain the mix of defense and veteran talent that has easily taken care of the Bulls all season long. Jrue Holiday finished with 16 points, 7 rebounds, and a +31(!) on the night, while big man Brook Lopez looked like his old self with 22 points, 4 blocks, and a +30.

The Bulls also continued to feel the absence of Zach LaVine in a big way. Despite a productive second-quarter run to cut the Bucks’ 19-point lead to just 2 points, the Bulls failed to get into any kind of offensive rhythm all night. The team shot just 38.5 percent from the field and 30.3 percent from behind the arc. Uncharacteristically, Nikola Vucevic joined in on the bad offense, finishing just 7-27 from the field (hey, still finding a way to finish with 17 points and 15 rebounds is pretty solid, though).

Look, I once again give credit to this team for trying to fight through their inefficiencies. They were able to stick to their identity for a full 48 minutes much like they did in their battle with the Knicks. At the end of the day, though, their roster was simply outmatched. Most of these games at the end of the season have shown us just how much work this front office has in front of them. Some pieces might be in place, but this team simply isn’t built to hang with the upper half of the league. It sucks, but that is what the offseason is for. Arturas Karnisovas fixed the infrastructure last summer. The talent on the court is next. 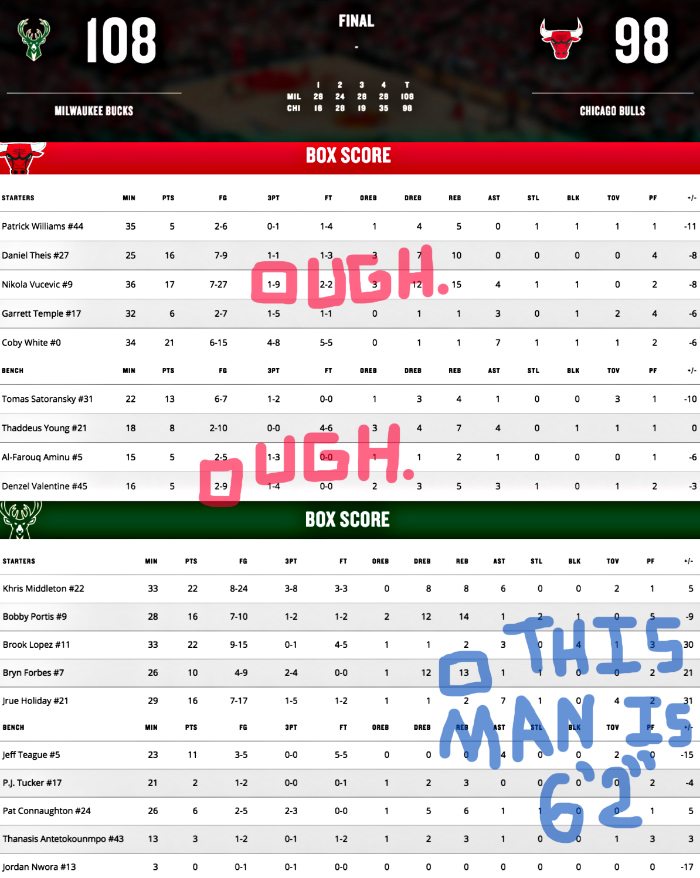