Look, I’m just surprised the Bulls didn’t end up like the Oklahoma City Thunder (who lost 152-95 … yes, you read that right).

Without Zach LaVine and Nikola Vucevic on the floor tonight, Chicago was at least able to keep up its newfound trend of playing hard. Yes, it resulted in another loss, but I’d much rather watch a team that looks like they care than the alternative. In fact, the Bulls cared so much that they walked into the locker room at halftime with a 63-54 lead.

However, as it usually tends to go when the opposing team has the obvious talent advantage, the Hawks eventually took control. After the Bulls scored 37 points in the 2nd quarter, the Hawks’ 10th-ranked offense took care of business in the second half. Atlanta went on a quick 17-2 run to open up the third quarter, eventually outscoring Chicago 28-12 in the frame. From there, it was pretty much smooth sailing behind Trae Young’s 33 points and 7 assists.

The Bulls will now move to 26-37 with the risk of falling 4.0 games behind the Wizards for the 10th seed (who are in a close contest with the Wizards at the time of writing this). In other words, postseason play of any kind continues to become a pipe dream, which means we might as well look for individual silver linings over these next eight games. Tonight, Patrick Williams is easily that silver-lining.

The rookie finished with 19 points in his highest-scoring outing since recording a career-high 23 points on March 14th. He scored from all three levels of the court with ease on an efficient 7-13 shooting night. It was the kind of aggressive offensive play we’ve been waiting to see, and it’s hopefully the kind of aggressive play that can continue to see over this final stretch. 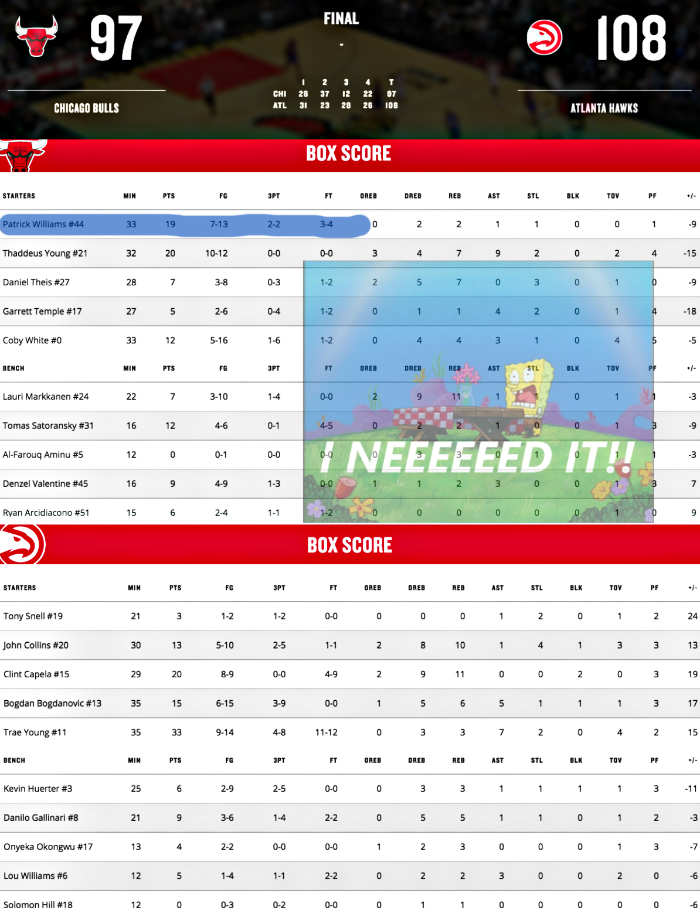