Those are the numbers that will ultimately cause the Bulls’ to miss the playoffs for the 4th-straight season. Chicago is four games behind Washington for the last remaining play-in tournament spot after a 106-94 loss to the 76ers tonight, and with only seven games remaining, the chance of catching up might as well be impossible.

Let’s be honest, we saw this coming when the Bulls fell in perplexing fashion to the Orlando Magic back on April 14th. Then, we saw it again when Zach LaVine entered the NBA’s Health and Safety Protocols. And again when the team was outscored 37-19 in the 4th quarter against the New York Knicks. The season has been numbered for weeks, and it’s why I’ve at least tried to take small, individual victories out of some of these most recent games. But tonight I even struggled to do that. Patrick Williams didn’t have the same kind of strong outing we saw against the Hawks, the team shot 32.4 percent from 3 and committed 15 turnovers as a whole, and everyone got dominated in transition. Overall, it was not only poor basketball but a pretty poor all-around effort … well … for three quarters.

The one positive note is that Coby White put on his clutch pants midway through the fourth quarter. He led a second-half surge against the 76ers second unit with 11 points in less than two minutes of play. Before the Bulls knew it, they found themselves within just ONE point with 7:00 minutes to go. Unsurprisingly, however, the 76ers plugged their starters back into the game and they continued to make easy work of the Bulls. It was another too little too late moment at the United Center.

Now, the Bulls wait to see if Zach LaVine will return to the floor on Thursday night. No, it is not going to change the outcome of this season, but it should at least make the basketball more watchable. And with fans welcomed back into the UC for the final four home games of the season, that is something they deserve.

Anyway, if you need me, I’ll be eating some pie and trying not to think about this team. 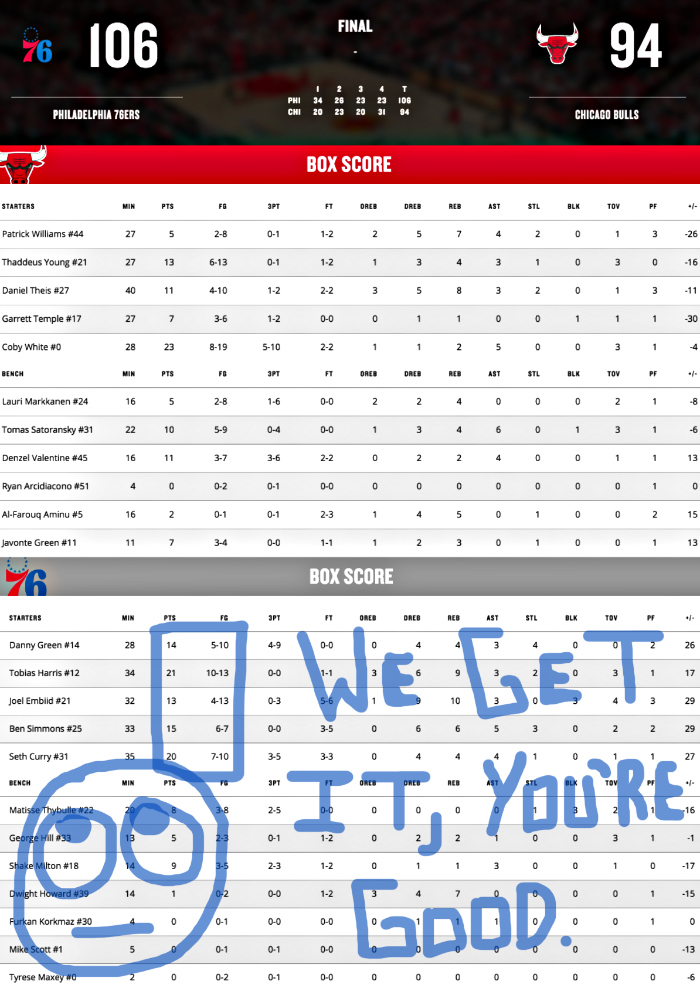