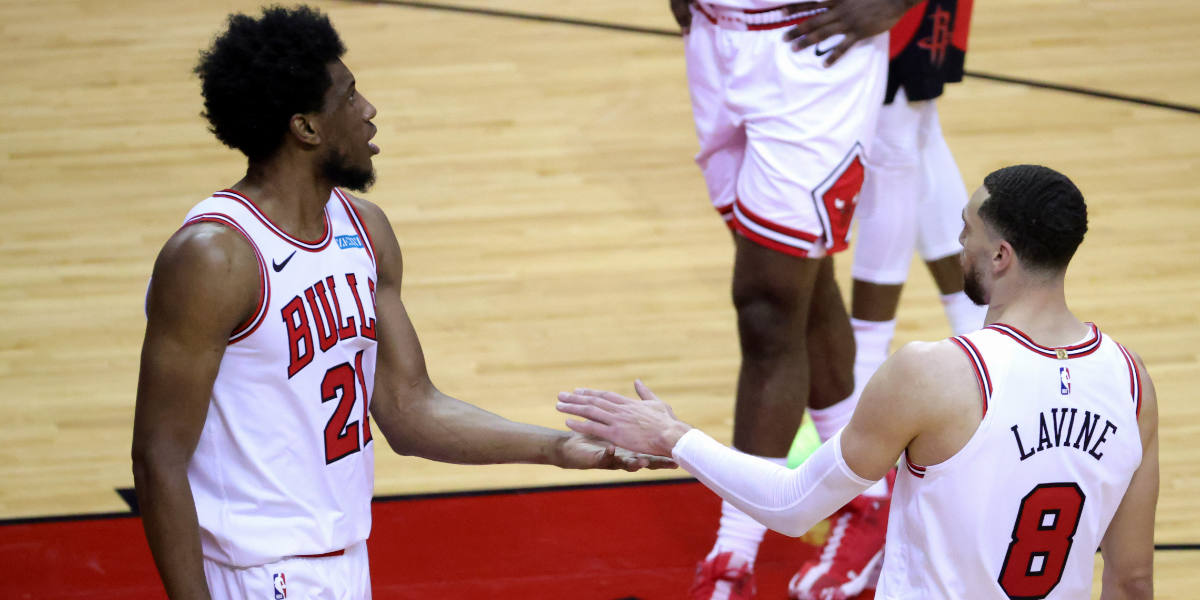 With five of the Chicago Bulls remaining seven games against Top-8 Eastern Conference opponents, and the Washington Wizards sitting comfortably with a three-game lead, the writing is on the wall for the end of this season. Playoff basketball is bound to be missed in Chicago for the 4th-straight year, which means all we can do is try to enjoy whatever time we have left with this team before another extended offseason.

With that in mind, I wrote out a couple of things that would make the conclusion of the 2020-21 season more enjoyable. Some I anticipate happening and others … not so much.

•   The Fans Get to See a Win: On a four-game losing streak with home matchups against the Celtics, Nets, Raptors, and Bucks left, another home victory this season is not a given. However, considering all the changes inside the organization, and the fact that fans have not visited the United Center since March 10th, I sure hope this Bulls team tries their hardest to pick one up. The fans who make the visit deserve it.

•    More LaVooch: Zach LaVine has missed the Bulls’ previous 11 games, while Nikola Vucevic has missed two straight. Head coach Billy Donovan said the team is hopeful LaVine can return for Thursday’s matchup with the Charlotte Hornets. Questions remain about Vucevic’s status, but all signs suggest that his current injury is nothing serious. The two have only played 10 games together up until this point, and the team went an underwhelming 3-7 in those contests with a -12.2 point differential when both LaVine and Vucevic were on the floor. Those numbers do not inspire the most confidence, but it is also a pretty meaningless sample size, especially when we factor in LaVine’s lingering ankle injury toward the beginning. These two simply need more time to learn each other’s game, and the best way to do that is in a competitive environment. I know tanking is on the minds of many, but I’d rather see LaVine and Vooch develop their chemistry for next season than ride the bench.

•   Patrick Williams Finishes Strong: Patrick Williams had his best performance since mid-March last Saturday. The rookie dropped 19 points on an efficient 7-13 shooting night against Atlanta Hawks. He sank shots at all three levels without hesitation, and he also finished the night with four free-throw attempts. It was the kind of aggressive offensive performance that felt like a switch might have finally flipped for the youngster. Then, two nights later, Williams failed to reach double-digit scoring for the 13th time in 15 games. To his credit, his eight shot attempts were still his second-most in the Bulls’ last 11 games, and he did add a solid 7 rebounds with 4 assists. However, there still isn’t a good reason why Williams should not be a larger focal point of the Bulls’ offense over the final seven games.

•   Denzel Valentine Doesn’t Take Another Ill-Advised Shot: This is like asking Cookie Monster to ONLY go to the bathroom at the Mrs. Fields Factory (do Muppets go to the bathroom?), but I’m scared my fist will go through the TV if Valentine misses another off-balance floater or Curry-range 3-pointer.

•   Give Al-Farouq Aminu Some More Minutes: The Bulls have several contracts expiring this offseason, but the recently acquired Al-Farouq Aminu isn’t one of them. The 30-year-old forward appeared in 17 games with Orlando this season after returning from a torn meniscus. Since coming to Chicago, he has only appeared in six of a possible 22 games. Considering his injury and the massive change in scenery, I’m not shocked he has yet to be thrown into the Bulls rotation. With that said, unless the Bulls trade him, Aminu will be in Chicago next season. And as a solid defender who limits his mistakes and has 711 NBA games under his belt, including 40 playoff games, it could not hurt to see what he has to offer. The team is in need of versatile defenders, and I don’t think it’s crazy to think he can enter the rotation down the road if fully healthy and caught up to speed.

•   Maybe Give Devon Dotson Some Minutes Too: If Devon Dotson hasn’t earned a larger opportunity by now, it probably means he has not impressed behind the scenes. But with Chicago’s point guard play so shoddy, and the season slipping away, I don’t think it could hurt to at least give Dotson a greater taste of big-league action. After all, the 21-year-old two-way rookie played some solid ball in the G-League bubble, averaging 13.0 points, 5.5 assists, and 3.7 rebounds on 46.7 percent shoot from the field over 10 games.

•   Cristiano Felicio Hits His First-Career 3-pointer: Come on, we need something fun to remember him by.

•   Thaddeus Young Records His First-Career Triple-Double: I don’t care if it comes in a 10-point win or a 20-point loss, Thaddeus Young deserves his damn triple-double. The veteran has played some of the best basketball of his 14-year career this season, and he has single-handedly kept several games from going completely off the rails. I know he is always going to be a team-oriented player, but he has my permission to go full-blown hero-ball mode any time over the next seven games if it means he finally locks up this triple-double.

"Damn, I can't get this triple-double" 💀

•   Billy Donovan Gets Ejected: The lack of foul calls in the Bulls’ favor this season has been pretty absurd, so to satisfy all of the fans’ anger, I’d love to see Donovan go into Bobby Knight mode and just throw his chair onto the court.

•   Joakim Noah Comes Out of Retirement and Re-signs With the Bulls Because Why Not: As I said, why not?