Excuse me for a second [walks into the bedroom, closes the door, screams “let’s go” at the top lungs, calmly walks back out of the bedroom]. Anyway.

The Chicago Bulls have completed a season sweep over the Charlotte Hornets for the first time since 2011-12 thanks to a dominant 120-109 victory. The team shot a highly efficient 50.8 percent from the field and 48.6 from downtown. They also passed the 30-assist threshold for the 18th time this season and outscored the Hornets 50-36 in the paint. The turnovers may have still reared their ugly head (17 cough-ups), but Chicago did force Charlotte into 15 of their own mistakes thanks to a full 48-minute effort on the defensive end.

Oh, and I don’t think it’s a coincidence THIS much went well for the Bulls in their first game with LaVine and Vucevic since April 14th. While LaVine struggled to find his typical offensive rhythm, his added presence clearly gave this roster the confidence boost it desperately needed. Then, Vucevic picked up where he left off two games ago, finishing the night with 29 points and 14 rebounds on a 12-24 shooting night (5-7 3PT). According to 670 The Score’s Cody Westerlund, the duo finished with a combined +10. Isn’t it crazy how your team is a lot better when you two All-Stars play?

#Bulls were +10 when Nikola Vucevic and Zach LaVine shared the court tonight.

They were out there together for about 18 minutes as their substitution patterns were a little different.

In other good news, Patrick Williams finished with a game-high +19 behind 11 points and 9 rebounds. The rookie only got five shot attempts off from the floor, but his aggressive play did get him to the line for an encouraging five free-throw attempts (also game-high).

Whether or not this win will mean anything this season is yet to be seen. But I have little doubt that continued competitive efforts like this to close out the season can go a long way toward building momentum into next season. The more guys like Vucevic, LaVine, Williams, and White can play a complete game in the starting lineup together on both ends of the floor, the more comfortable they will be with one another in 2021-22.

Up next: The Celtics … on national TV. 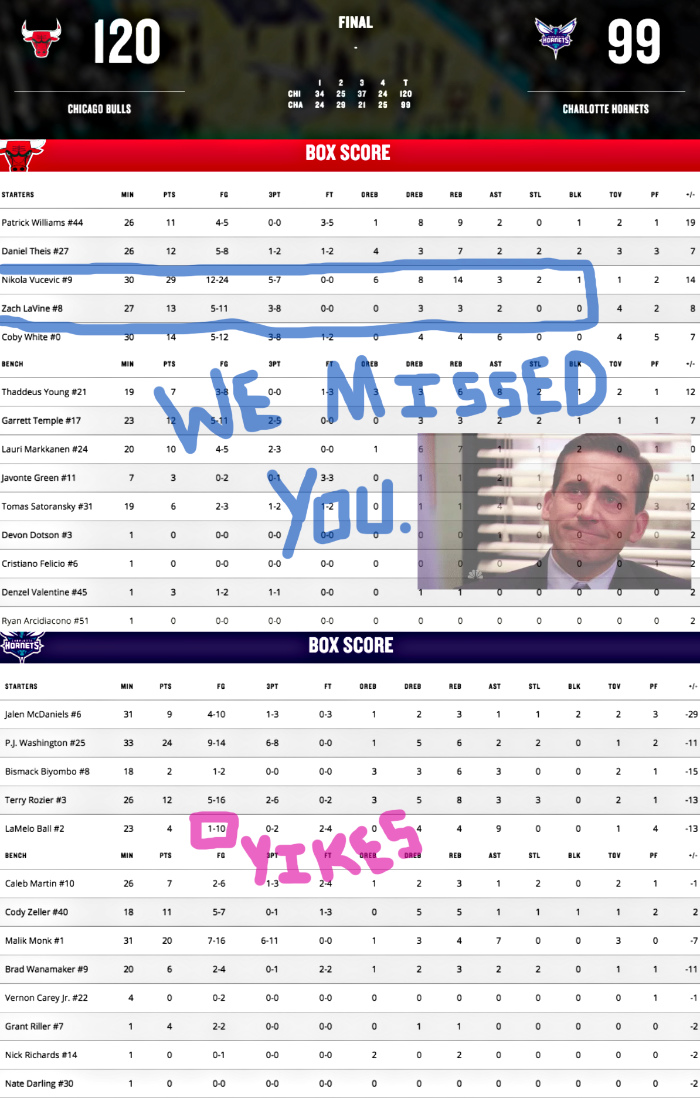