Tonight’s 108-96 victory over the Detroit Pistons was not a big win, but it sure was a big deal.

When the last-place team in the East and second-worst team in the league is playing without eight of its players, including top-scorer Jerami Grant, a double-digit victory should be a given. The Bulls made it happen with ease, but it was the way they made it happen that made this game feel more important than just an expected thrashing.

Zach LaVine and Nikola Vucevic by far had their best dynamic duo performance since joining forces at the trade deadline. Again, the opponent may have been rather weak, but they still showed a much clearer understanding of how to distribute the workload and how to play off one another for a full 48 minutes. LaVine finished with 30 points and 6 assists on just 1 turnover. Five of those assists went to Vucevic, who added 29 points, 16 rebounds (he’s had at least 14 rebs in six of his last seven games), and 0 turnovers to the stat sheet. When the two shared the court, it was pretty much utter dominance, and it was hard not to start daydreaming about what the 2021-22 season could hold.

Zach LaVine and Nikola Vucevic chemistry continues to blossom before our eyes. Guys really starting understand how to distribute the workload.

Bulls 3-0 since their return with three-straight double-digit victories.

Coby White also deserves another major shoutout for his newfound consistency. White has started to feast off the opportunities created from the extra attention LaVine and Vucevic draw, and he drained at five 3-pointers for the second-straight game in a row. Similarly, it was his fourth time in six games that he finished with over 20 points.

The Bulls’ (29-39) chance at a play-in berth remain slim, but they are doing what they need to do to stay somewhat in the picture for now. Continuing that will be easier said than done, however, as this final week of the regular season will feature two matchups with the Nets and one against the Bucks. 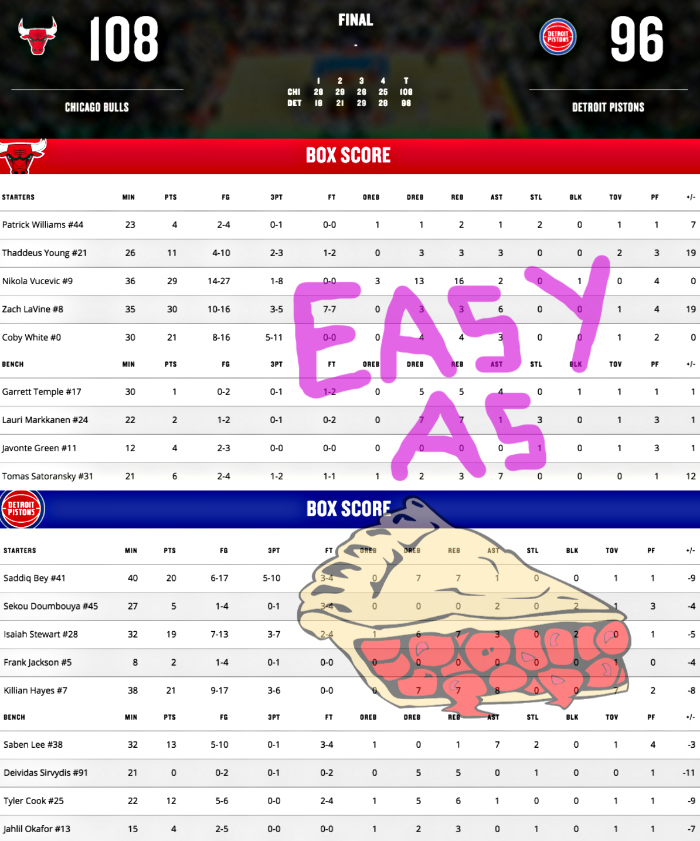 Check out the full box score.