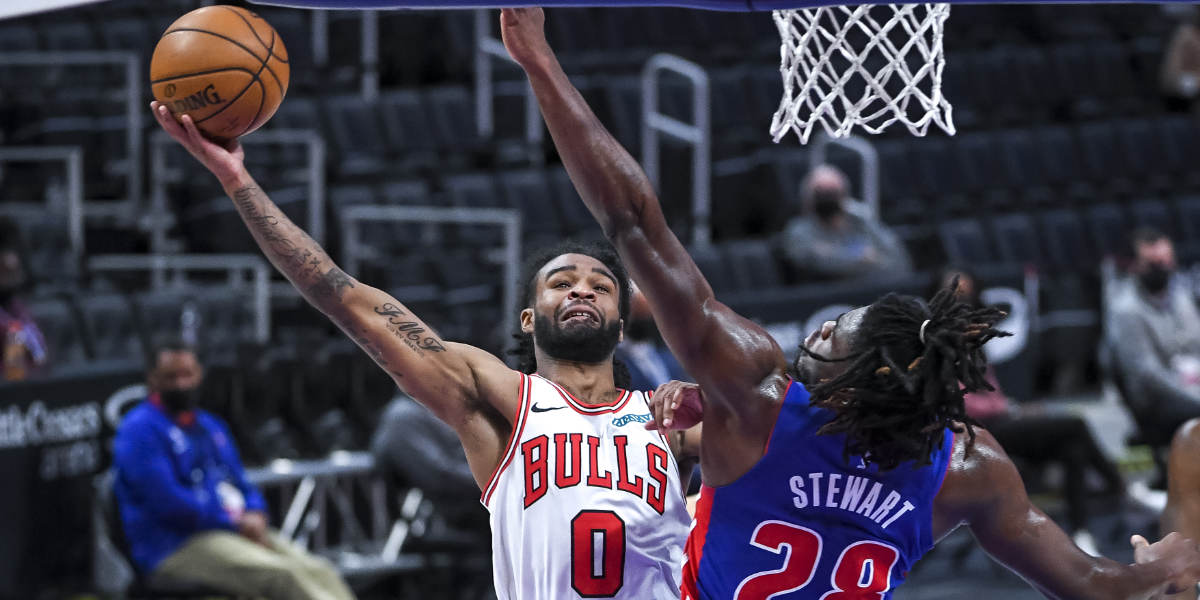 Coby White had to go back to go forward. After starting the first 36 games of the regular season, White was put in more familiar territory by head coach Billy Donovan. The second-year guard returned to the bench to play spark-plug duties, the same role we saw him play for 64 of his 65 rookie games. However, instead of getting comfortable, White got prepared.

White’s next chance to prove himself came just 18 games later, when Zach LaVine entered the NBA’s Heath and Safety Protocols and White was thrown back into the starting lineup. Over the next 11 games, White looked like a new and improved player. He took better shots, turned the ball over less often (two or fewer turnovers in over half the games), got to the free-throw line, and hit clutch buckets. White played so well that even when LaVine returned to the floor on May 6th, White stayed planted in the starting five.

Three games later, instead of trending in the wrong direction alongside two high-usage All-Stars, White has found a way to continue fitting in. Over the 14 games started, including these last three wins, White has now averaged 18.7 points with 5.8 assists and 3.6 rebounds per game. He has also shot 44.5 percent from the field and 41.4 percent from behind the arc. Ask those watching at home, and I’m sure some might chalk this up as a hot streak. Maybe so.

Ask Donovan, however, and White’s fit alongside his new teammate could play a role.

“I think that Coby has really benefited from Vooch, and I think Vooch has really benefited from Coby. One of the things we’ve tried to do a lot on Vooch’s post-ups is to have Coby at least at the top of the key or ball side to force each man into a decision. A lot of times when they go down to give some help, it really frees Coby up. And, I’ve always said this, Coby is an exceptional catch-and-shoot 3-point shooter. I think when he’s playing against closeouts, like most good offensive players, when you are playing against closeouts it makes it a lot of easier to drive and go by people and create. I think not only has Coby shot the ball well, but he’s also gotten into the teeth of the defense and found some different guys. I think they have all [White, Vucevic, and LaVine] complimented each other.”

When Vucevic joined the team on March 25th, White was already in the midst of his bench stint. The two shared minutes, but it wasn’t anything substantial. Things changed when LaVine went down, and I guess Donovan believes the chemistry started to brew. After all, as Donovan said, the extra help Vucevic tends to draw in the paint often pulls defenders off White, handing the 21-year-old either an open catch-and-shoot 3-pointer (of which he is shooting 41.7 percent since rejoining the starting lineup) or a clear lane to the hoop. In other words, two very high-percentage looks for a naturally gifted scorer.

Then, add LaVine back into the mix, and the opportunities for White have only expanded. While the ball may not be in his hands as often, the defense is presented with a similarly difficult decision. Trap LaVine and White could be waiting. Over the three games where the Bulls have run with this starting lineup, the team has outscored opponents by 55 points total and held a +21.4 Net Rating (h/t Rob Schaefer). All things considered, that’s promising stuff, especially for a player like White, who was sitting demoted less than one month ago.

To be clear – no – White hasn’t been perfect. But to say he hasn’t flipped some kind of switch over this last month feels like it would not be giving credit where it’s due, which is why White’s progress is already something he and head coach Billy Donovan have recognized. And I’m sure it’s also something the front office has recognized.

While I think a White-LaVine-Vucevic starting combination remains out of the future picture, I do think the Bulls organization must feel a bit more comfortable about White’s potential long-term role. His boost in assist totals and drop in turnovers are just as important as his scoring chops alongside both All-Stars. The more he demonstrates the ability to do those two things, the more comfortable this organization might be with his ability to be a truly lethal six-man. Not only can Donovan have the flexibility to play him in spurts with LaVine and Vucevic, but he can also rely on the 21-year-old to adequately lead the second unit. With that possibility in mind, Arturas Karnisovas could also feel even more comfortable opening up a roster spot this offseason.

Tomas Satoransky is only owed a partially guaranteed $5 million next season. My guess is the option of moving on from the veteran guard was always on the table, but I would not be shocked to learn that White’s more reliable play provides the last push this front office needs to head in that direction. No matter the case, I think it’s fair to say White has reinvigorated the hope around his future role in Chicago. He may not be the starting point guard this team needs, but he can still be a valuable piece.