“We’re going to have to go out there and fight for our lives every game to give us a chance.” – Zach LaVine on May 6th.

Tonight, LaVine fought for his life. Everybody else? Not so much. The Bulls electric scorer posted 41 points on an amazing 15-27 shooting performance from the field and 6-11 night from downtown. The All-Star kept his team alive with big-time bucket after big-time bucket. Down 102-84 with nearly six minutes to go, he single-handedly brought the score down to 102-91. The Nets turned back to Kevin Durant to guard the human torch, but LaVine still went on to assists a huge Vucevic 3-pointer and score four more points to keep his team within striking distance.

Alas, the Bulls defense wasn’t enough, and – stop me if you heard this before – LaVine just didn’t have enough help. Remove LaVine’s performance from the field, and the rest of the team shot a dismal 24 for 69 (not nice). Coby White and Nikola Vucevic both struggled to provide the same kind of two-three punch we saw from them over the previous three games. The poor night from Vucevic, particularly, came as a shock. The big man had been averaging a pretty absurd 24.1 points and 14.6 rebounds per game over his last seven contests, but tonight scored just 12 points with 12 rebounds on 5-18 shooting from the field. All things considered, it’s hard to be too upset at the guy after the numbers he’s put up since coming to Chicago, but that cold shooting performance couldn’t have come at a worse time.

With a loss and a Pacers win, only one scenario remains for the Bulls to make the play-in tournament: They have to win out while the Wizards lose out. Washington’s remaining games are against the Hawks, Cavaliers, and Hornets. Meanwhile, the Bulls have the Raptors, Nets, and Bucks left on the schedule.

The end is near, folks. 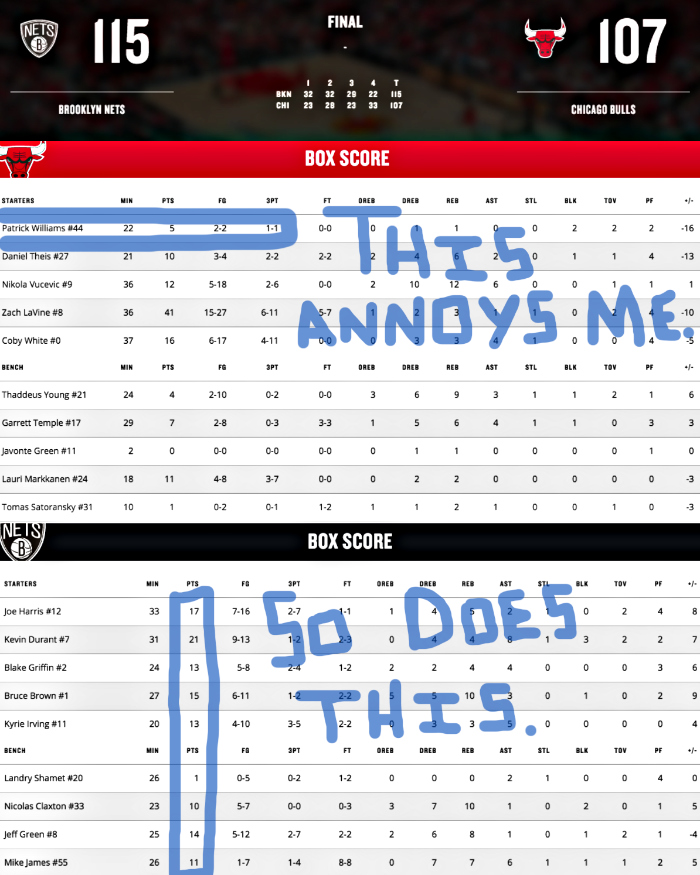