The Bulls (30-40) did what they had to do tonight, and there really isn’t much else to say.

The Toronto Raptors walked into this game in full tank mode with only eight available players. Typical starters Kyle Lowry, Fred VanVleet, Pascal Siakam, and OG Anunoby were all on the sideline, as were role players like Chris Boucher and Gary Trent Jr. Considering the Bulls were operating with their two All-Stars in the lineup and a mostly healthy squad, there was just no reason for this game not to be an easy blowout victory.

Even though the stat sheet might say otherwise, it was a pretty quiet night for Zach LaVine and Nikola Vucevic. LaVine finished with 24 points on 5-18 shooting, while Vucevic added 16 points with an easy 16 rebounds and 6 assists. Coby White was the one to actually steal the show. The second-year guard played an impressive 42(!) minutes with 17 points, 10 assists, and 5 rebounds. While the competition may not have been the most fierce, it was yet another performance where White looked like a completely new player.

I mean, look at this craziness!

In the first half of this season, poor shot selection, bad decision-making, and sloppy turnovers ate up a bulk of White’s possessions. However, more recently, he has played with a controlled pace and eye for the game that falls more in line with what a lead guard is supposed to do. Whether or not all this positive play will mean anything going next season, though, is up for debate.

Anyway, the Bulls stay alive in the play-in tournament race for one more night. They must win out the remainder of the season while the Wizards lose out to steal the 10 seed. The Wizards have lost two games in a row, but there is no question they will be a solid favorite in a matchup against the Cavaliers on Friday. More tomorrow. 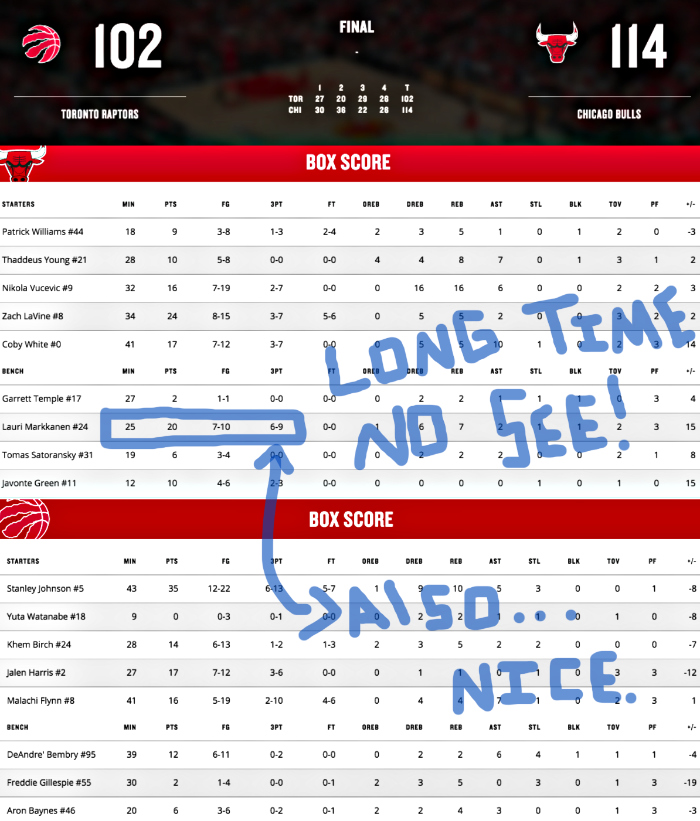