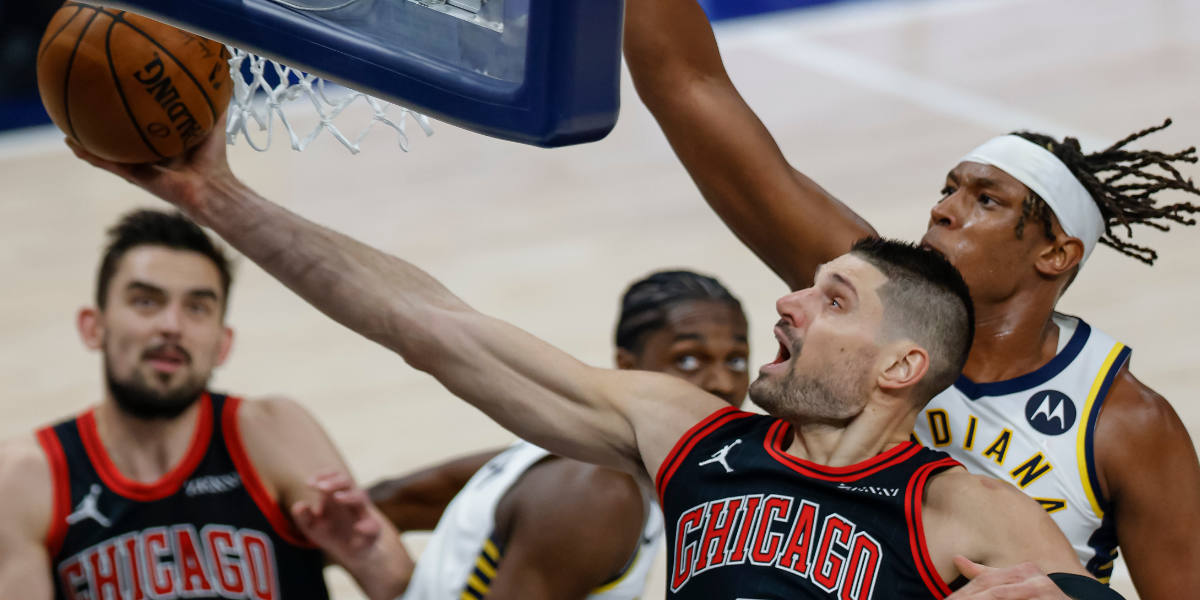 Only two players this season attempted at least 250 shots from the restricted area, 300 from inside the paint (non-restricted area), 300 from mid-range, and 300 from above the break: Bradley Beal … and Nikola Vucevic.

Of course, we have to mention that both players were in situations where they had the liberty to shoot at such a high volume. Beal was the clear-cut No. 1 option for a below-.500 Washington team and Vucevic played the majority of his season as the go-to scorer for a struggling Orlando squad. The opportunity was there for both players to do whatever they wanted. At the same time, Beal is one of the most elite and versatile scorers in the game, so to offer a shot chart that only matches his efforts is still pretty damn impressive. It’s even more impressive when we consider the position Vucevic plays.

Beal is a perimeter player in a perimeter-centric league. Vucevic is a seven-foot center. Not a power forward hybrid, but a center. He scored the 5th-most points from the post-up this season (48.5 percent), and he attempted the 4th-most post-up looks. The players that landed in front of him were Joel Embiid, Nikola Jokic, Julius Randle, and Jonas Valanciunas. Besides Randle, a power forward, those are all centers doing what centers do: Bulldozing guys around the rim. Only the most special players can step outside that role, and while Embiid and Jokic definitely do that, neither consistently shot the ball from as many different places on the floor as Vucevic.

Volume is one thing; converting is another. Vucevic scored 23.5 points this season on a 47.7 percent shooting clip from the field and a career-high 40.0 percent from downtown. When we once again boil things down to each zone on the court, Vucevic joins some elite company.

Players to shoot at least …

So not only was Vucevic’s shot-taking on an island of its own for centers but (more importantly) so was his shot-making.

His success behind the arc is particularly astonishing. The dude shot a combined 25 three-pointers in his first five years in the league. He worked his way up to a career-high 289 last season before exploding for his 440 this season on a 40.0 percent clip. Rarely, if ever, do we see this kind of expansion from a player who is headed toward 31-years-old.

A handful of those 3-pointers came in catch-and-shoot situations, which is an area where Vucevic has become increasingly lethal. Among all players this season, Vucevic took by far the most catch-and-shoot shots in the league at 676 attempts, converting at a 42.3 percent clip. The next closest player was Duncan Robinson at 461 attempts and a 41.6 percent clip. The next closest center was Kelly Olynyk (19 names down the list), who shot 319 catch-and-shoot attempts at a 35.1 percent mark. Vucevic’s wide frame and heavy feet have helped him continue to be one of the NBA’s better screeners (finished 9th this season in screen assist points). And when you combine that ability with a special jumper, pick-and-pop buckets behind the arc and in the mid-range become that much easier to sink.

With all of this in mind, it’s not hard to see why the Chicago Bulls front office took the risk they did on March 25th. Vucevic can be the perfect complement to an already-efficient scorer like Zach LaVine. When the two work in the pick-and-roll, opposing defenses are presented with no right answer. Choose to guard LaVine, and Vooch is more than capable of knocking down the shot. Go with Vooch, and … well … we all know what LaVine will do.

The broader point, however, is just how much of a unicorn Vucevic has turned out to be. Nothing about his versatility for his position, nor his continued development as a scorer, is normal. He may have his issues on the defensive end, and he may not be the most dominant in any one category, but he is one of the most unique and talented offensive bigs in the league. And while acquiring that skillset may have cost two first-round picks, I’m sure it’s something the Bulls are more than happy to live with.