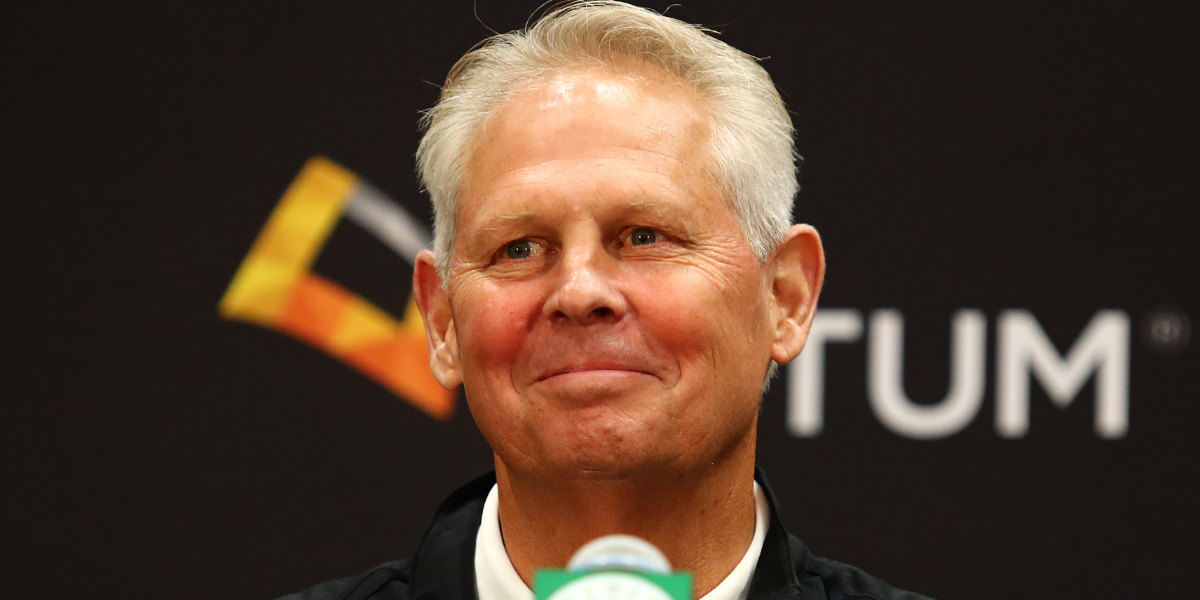 Editors Note: Almost immediately after clicking publish on the report that Ainge was considering stepping down, more information came out that he was, indeed, going to step down in facor of Head Coach Brad Stevens. Original post follows with update below.

Less than 24 hours after the Boston Celtics season officially ended, ESPN’s Adrian Wojnarowski has reported that Danny Ainge, the team’s President of Basketball Operations, could step down.

Boston Celtics President of Basketball Operations Danny Ainge is seriously considering his future with the franchise and could make a decision to step down, sources tell ESPN.

The 2x NBA Champion and former Boston Celtic has run the organization since 2003. After failing to make it out of the first round of the playoffs in two straight seasons, Ainge’s Celtics were one of the worst teams in basketball over the course of the 2005-06 and 2006-07 season. However, he then made the historic addition of Kevin Garnett (combining the big man with Rajon Rondo, Paul Pierce, and Ray Allen) and helped the team flip from a 24-58 record to a 66-16 championship-winning squad in 2008. Anything is possible!!!! Boston made the finals again two seasons later, only to lose to Kobe Bryant and Phil Jackson.

Since the start of the 2010s, despite having a normally competitive roster, Boston has failed to make another championship run. Instead, Ainge has suffered the pressure of losing three times in the Eastern Conference Finals over the previous five seasons. Things really came to a head for the Celtics this season when the star duo of Jayson Tatum and Jaylen Brown struggled to keep their team above .500, ultimately suffering a 1-4 defeat at the hands of the Brooklyn Nets in the first round.

All things considered, I’d kill to have a perpetual Eastern Conference Finals contending team, but I understand why Ainge and the organization might feel a change is needed. Bulls fans know all too well the level of tension that can build between fans/players/front office personnel over nearly a two-decade-long stint as a top executive. Sometimes, change is just needed.

Regardless of Ainge leaving, one has to assume some big moves are coming inside the organization. Rarely do reports like this surface without some kind of institutional action taken. And, if that does prove to be the case, we have to wonder what that means for this existing Celtics roster. Could Brown ever be shopped? Will Marcus Smart be sent elsewhere? Will the Celtics even think about re-signing Evan Fournier? Could many of their young role players be headed elsewhere? What about Kemba Walker? I’m not sure if the Bulls would be a worthy trade partner for this changing organization, but it’s surely something to think about if things boil over in Boston.

WOW. Soon after finishing this post, news dropped that Ainge will, in fact, step down and Celtics head coach Brad Stevens will be promoted to front office leader!

Brad Stevens is moving from his head coaching role to leading the Celtics basketball operations — and Stevens will lead the search for the Celtics‘ new head coach, sources said. https://t.co/U74E2VBLfo

Stevens has been described as worn down with coaching since The Bubble, and welcomed the chance to make the transition to the front office, sources tell ESPN. Stevens will help lead the search for his successor as head coach.

While it’s not crazy for a head coach to eventually find himself in a front-office position, it’s pretty wild to see this drastic of a move made. I mean, zero search after Ainge’s 18-year stint as an executive feels bold, especially when we consider Stevens’ lack of experience in an executive role. There is no question the head coach is a fantastic basketball mind, but this is a whole new ballgame. Also, I’m interested to see how this goes over internally, especially after Stevens just had arguably his worst season as the team’s head coach.