With "Anticipation" of Portland Moving on From Head Coach Terry Stotts, Could Certain Players Become Available? Skip to content 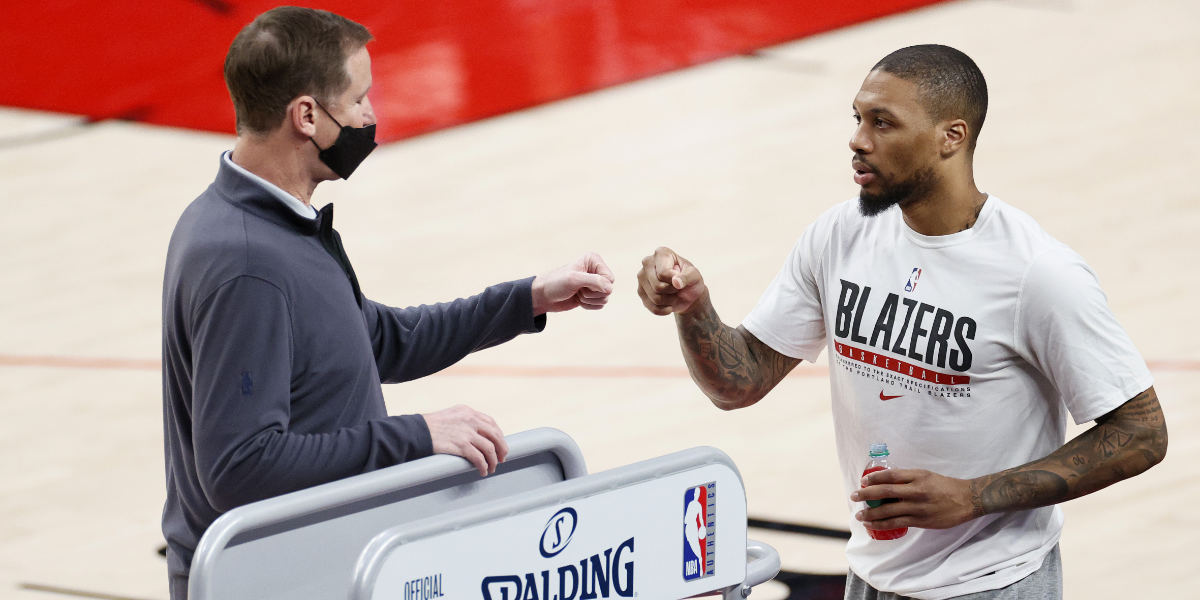 The Boston Celtics were our first reminder of that this offseason after President of Basketball Operations Danny Ainge stepped down and head coach Brad Stevens took over the organization. Now, the Portland Trail Blazers have potentially entered the chat, with Yahoo Sports’ Chris Haynes reporting that Terry Stotts could be out after nine seasons as head coach. In fact, Haynes writes that the Trail Blazers might already have a top replacement candidate in mind.

Kidd — who was previously a head coach in Brooklyn and Milwaukee — is expected to interview for the Boston Celtics head coach opening and is expected to be a top target of the Portland Trail Blazers with the anticipation that Terry Stotts will be relieved of his duties after nine seasons with the team, sources said.

The New York Times’ Marc Stein also shared that he has heard the same about the Trail Blazers and Kidd.

Hearing the same as what @ChrisBHaynes detailed here: There is strong buzz in league coaching circles that Lakers assistant coach Jason Kidd will emerge as a top candidate in Portland if the Blazers, as many expect, respond to their first-round exit by making a coaching change. https://t.co/APAGwjEiyi

Jason Kidd has remained a popular head coach candidate ever since his stint with the Milwaukee Bucks ended in 2018. He always received some credit for helping develop Giannis Antetokounmpo, and he has reportedly played a huge role for the Lakers since joining the coaching staff as an assistant in 2019.

Interest in Kidd aside, these reports suggest the Trail Blazers are on the brink of pretty drastic change. While there have been no reports of front office movement, a shake-up of the coaching staff could very well lead to a shake-up of the roster. The Blazers have made seven straight playoff appearances, but only three times over that span have they ever made it out of the first round. Now, the franchise is riding back-to-back first-round exits with the nucleus of Damian Lillard, C.J. McCollum, and Jusuf Nurkic.

To the team’s credit, they tried to upgrade their role players this season. Derrick Jones Jr., Robert Convington, and Normal Powell were all well-known additions, but all failed to drastically move the needle. With that being the case, one has to wonder whether the team will look to hold onto any of the three (let alone really any of the supporting cast).

Will they even try to re-sign Powell? Could Jones Jr. be had at a relatively inexpensive price? How valuable do they view Robert Covington’s expiring contract? There were rumblings of a Chicago Bulls interest in DJJ last offseason, so I wonder if it’s something the Bulls would investigate. Likewise, Covington is the kind of multi-positional defender and decent three-point shooter I could see Arturas Karnisovas having some interest in at only $12 million on an expiring contract next season.

We also can not rule out the Trail Blazers pursuing even greater change. After all, repeated early playoff exits imply the team’s ceiling is only so high with their existing stars. C.J. McCollum has been a speculated trade candidate for years, and the idea of that has only picked up steam this year. Not only is he owed $100 million over the next three seasons, but he offers the team an electric scoring ability they already possess with Lillard. If they wanted to add fresh faces and more flexibility, trading McCollum would undoubtedly provide them with the most valuable return of anyone on their roster. That is, of course, unless Lillard becomes available.

The Blazers are not going to trade Lillard willingly, let’s make that clear. Lillard has also shown nothing but a desire to stay in Portland over his years. However, we all know how fast things change in the NBA.

I certainly would not bet on Lillard leaving Portland. I think everything else would probably change around him first. But we might as well keep an eye on him, as well as the entire supporting cast, as the offseason truly gets underway. The Bulls need upgrades, and we never know where those upgrades could come from.