Daniel Theis Will Have Plenty of Interest on the Market This Season - What About the Bulls? Skip to content 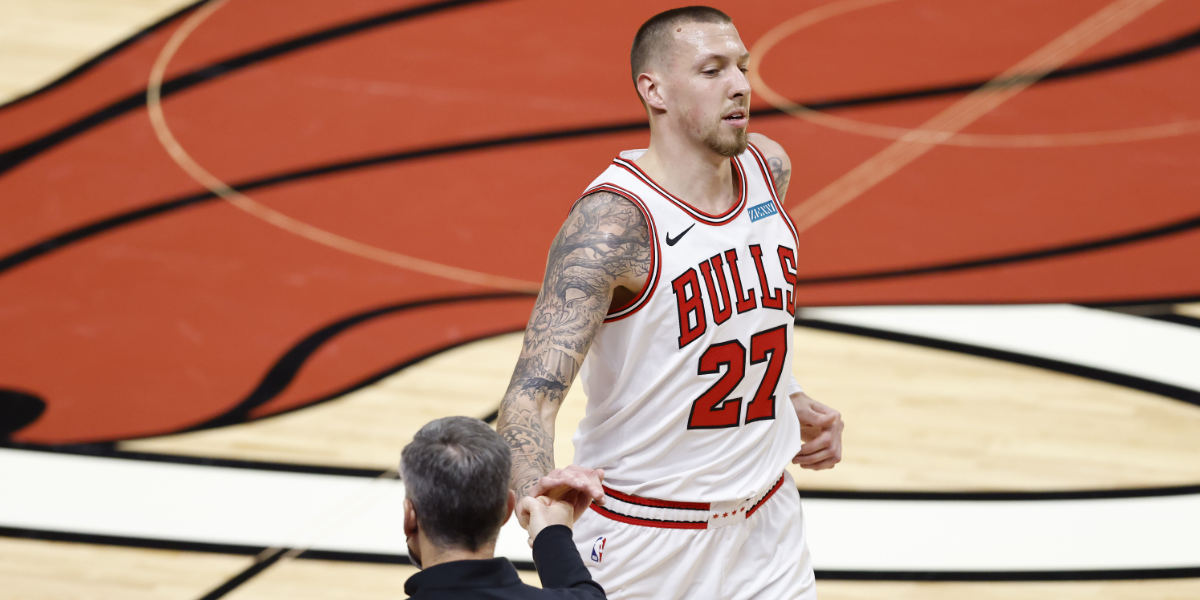 When Daniel Theis arrived in Chicago, he was a breath of fresh air. The aggressive play on both ends of the floor provided the team with a skill set they desperately lacked. More importantly, his offensive versatility allowed for him to pass the eye test as a serviceable four alongside Nikola Vucevic.

Considering the new Bulls front office snatched him up at the trade deadline, I have little doubt they will express interest in re-signing him this offseason. At the same time, we have to question whether or not his price is one the Bulls are willing to pay. Theis is a 28-year-old who started 64 games for the Eastern Conference Finals Celtics one season ago. There are teams around the league who could very well pay up for that kind of experience, and that is exactly what HoopsHype’s Michael Scotto believes we will see this offseason.

On the latest episode of the HoopsHype Podcast, Scotto told Yossi Gozlan that he’s heard Theis is a starting-caliber player who will command above the mid-level exception this season.

From what I’m told, Theis is looking for the right balance of an opportunity to play, be on a winning team, and obviously have some respect shown through money. The value I’ve heard for him, expected value from talking about him with people around the league, he can command interest from teams above the mid-level in free agency thus far. Time will tell, ultimately, but this guy is a a starter and has got playoff experience, he can shoot the three if he has to, a leader in the locker room guy. He does all the intangibles for a team to win, we saw it in Boston when they were doing well, and it will be interesting to see his market, as well.

The mid-level exception (MLE) is a chunk of money that organizations over the cap can unlock to sign players. Contracts signed using MLE money can last as long as four seasons. The exact amount of the MLE is based on the salary cap, and with that amount set to stay relatively the same as the last offseason due to the pandemic, we can estimate the MLE to be somewhere around $9.5 million.

So, in other words, people around the league expect Theis to make over $9.5 million annually on his next contract. In fact, considering this weak free agency class and the amount of cap space that will be out there, I could envision Theis getting to $12 million a year somewhat easily. Again, he not only has some encouraging previous experience, but he possesses the positional versatility to play both frontcourt spots. Teams will pay for that, especially those teams looking to contend in 2021-22.

But are the Bulls ready to pay that price? It’s a tough question to answer. We have to remember Theis’ natural position is still underneath the basket. With Nikola Vucevic in Chicago, his opportunities to play there will be limited. I’m sure another team would be willing to give him a starting center spot. Maybe the Bulls are willing to pay him to be their full-time starting power forward, but it is a bit of a risk when we consider he has never played a full season at the position.

Theis did clock 44 percent of his minutes in Boston at the four this season with a +3.1 differential (almost identical to his +3.8 at center), but he was a -10.1 in the spot over his 565 minutes with the Bulls, per Cleaning the Glass. It’s a small sample size, and I do think most of that is circumstantial. Yet still, asking whether or not he should be the team’s multi-year commitment at power forward is a worthwhile question. We also have to remember the Bulls have a number of roster spots they need to fill/upgrade. If Theis’ price begins to spike higher and higher, the Bulls could limit their flexibility to make the sweeping changes they want.