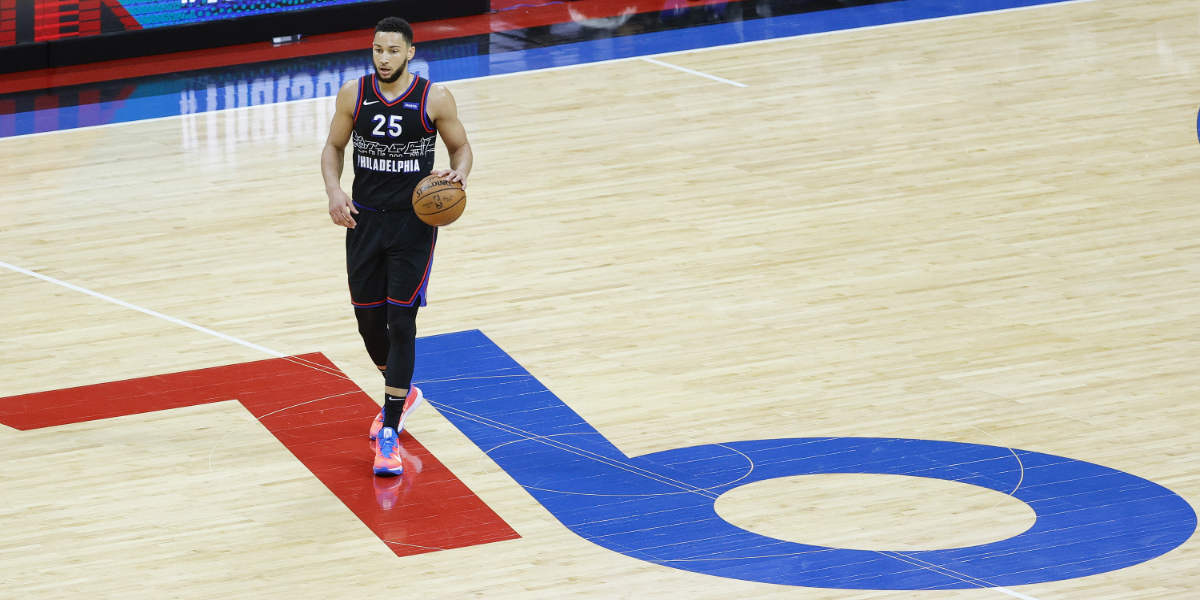 Let’s not be coy: Ben Simmons had a disastrous Eastern Conference Semifinals.

Expected to be Philadelphia’s “Superstar No. 2” behind Joel Embiid, Simmons played more like a liability. He averaged just 9.9 points in the seven-game series against the Atlanta Hawks, and while he may have shot 60.0 percent from the field, it came on a hesitant 6.4 shot attempts per game. Simmons looked nothing short of terrified to find the bottom of the net, and the Hawks knew it. The team felt more than comfortable sending the 24-year-old to the line, where he shot a dismal 34.2 percent over his 12 playoff games. Hack-A-Ben!

Simmons shot the ball just four times and scored just five points in the 76ers’ most pivotal game of the season. The performance exposed almost every fatal flaw that comes with the Simmons experience, including this perplexing choice to pass up a wide-open dunk/layup.

Ben Simmons did not just pass this up… pic.twitter.com/4JyM7ZHNkJ

How Doc Rivers did not just call a taxi and send Simmons to the airport, I do not know.

Rivers and Joel Embiid held nothing back in their postgame press conference. Embiid told reporters that he believed the turning point of the game was the play shown above. Ouch. When asked whether or not Simmons could still be a championship point guard, Rivers said point-blank, “I don’t know how to answer that right now.” Super ouch.

While I believe it was a bit ruthless for these two to table-top Ben Simmons into a highway full of buses, no one can deny their point. Simmons did play a massive role in this team’s demise, and whether or not he can be the second-best player on a ready-to-contend Philly team is up in the air. What is not up in the air, however, is what head of basketball operations Daryl Morey will look to do next.

Simmons was on the trading block this season. He was reportedly offered in the James Harden sweepstakes, which the Brooklyn Nets ultimately won by offering more draft compensation. Now, as the New York Times’ Marc Stein pointed out, Simmons will be on the trading block again this summer, but the potential for him to be the centerpiece in a Harden-like deal might as well be lower than his career 3-point percentage (14.7 percent, in case you were wondering).

The Sixers will obviously explore the Ben Simmons trade market in the offseason … as seen in January when Simmons was the centerpiece of Philadelphia's James Harden pursuit. That's not the question.

Try: Is there a market now?

Simmons’ broken offense makes him hard to trade in a league that heavily revolves around elite scorers. And his contract makes it that much harder. Over the next four seasons, Simmons is owed roughly (drum roll, please) … $146 million. The final year of his contracting 2024-25 is worth $40.3 million alone.

But, hey, it’s not all bad with Simmons!

Not only is he still just 24-years-old, but he is one of the most versatile and skilled defensive players in the league. His effort on this side of the ball has already helped him land three All-Star bids and back-to-back All-Defensive First-Team selections. Not to mention, he is a skillful passer who averaged roughly 7.0 assists per game this season and 8.8 in the playoffs. Those are two skills any team would like to have, and it’s those two skills that already have people connecting him to the Chicago Bulls.

Scream all you want, but Simmons fits pretty damn well with the Bulls on paper. He would help clean up the backcourt defense while also acting as the high-level facilitator the team has needed for years on end. The timeline also hits the mark. Simmons could help the Bulls compete right now while also offering them a young and developing piece to build with moving forward. John Hollinger recognized this same thing, and it is why he threw the Bulls in as a speculated destination for Simmons in his latest at The Athletic.

The big problem with Hollinger’s piece, however, is that it proposes a LaVine for Simmons swap. Do I think this is what the 76ers would ask for right off the bat? Absolutely. LaVine would be a lethal 1-2 punch with Embiid. Do I think the Bulls would do it? Hell-to-the-NO.

Arturas Karnisovas not only demonstrated a clear desire to build alongside LaVine with his deadline moves this season, but the only reason Simmons makes sense in Chicago would be because of LaVine’s presence. Simmons would be able to take over the playmaking and cover up LaVine’s underwhelming defense. Plus, as a decent threat to drive to the hoop with a strong screen-setter like Vucevic, Simmons could take some offensive pressure off LaVine.

Send LaVine in the trade for Simmons, and the Bulls are stuck building around an unproven offensive commodity who will eat more than $33 million a year. Everything we have learned thus far about the Bulls’ new regime is that – while they do value strong defensive play – they heavily value strong shooting and creative offense. Not to mention, the organization has made it clear they want to win sooner than later. Would they really break up what they have started just to add Simmons? I don’t see it.

In my opinion, the only package that makes sense for Simmons (from a Bulls perspective) would revolve around a Lauri Markkanen sign-and-trade that includes Coby White and cap-filler (think Al-Farouq Aminu’s salary). But Philly ain’t taking that. The 76ers would also surely ask about Patrick Williams, but he feels like the closest thing the Bulls have to an “unavailable” player. The other option could be to throw draft compensation into the mix, but that feels unlikely after moving two first-rounders for Vucevic in March. So … yeah … there isn’t really much that makes sense here.

I’m not against Ben Simmons. I want to make that clear. A change of scenery could do him a lot of good, especially if that change of scenery is built specifically around him. But the idea of him landing in Chicago is … complicated. He simply is not worth giving up a number of assets to acquire (particularly draft compensation since the Bulls have already limited themselves), and the risk that comes with his contract feels like one this front office is not yet ready to take.