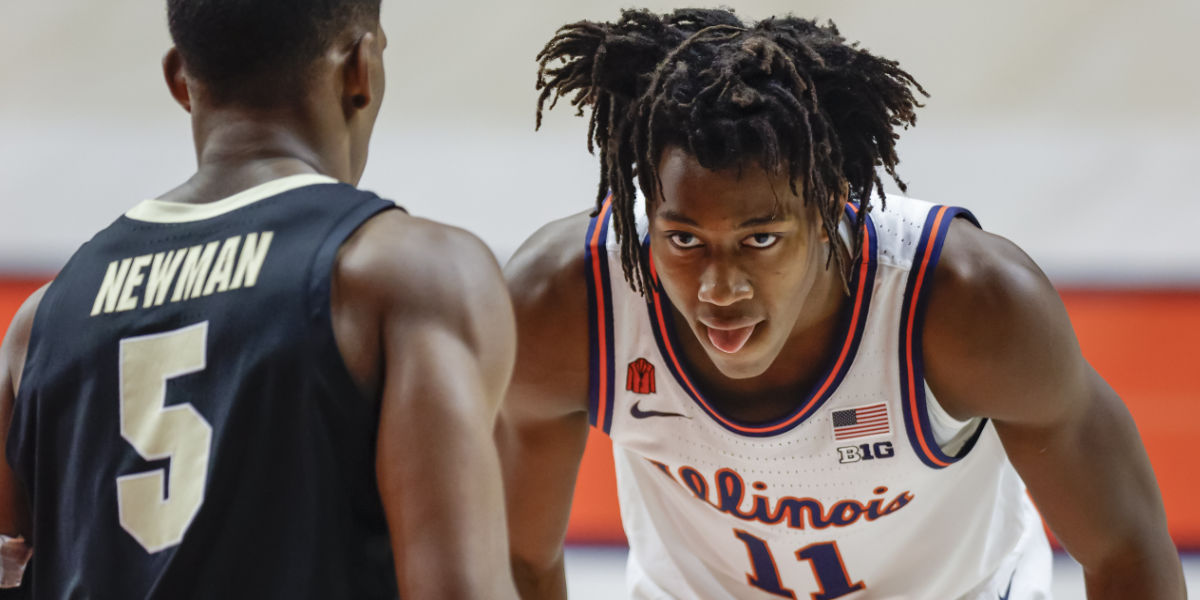 On Thursday, we learned the Chicago Bulls have already interviewed Scottie Barnes and Sharife Cooper, two projected first-round draft picks. Now, the organization appears ready to talk to another well-known talent, as Chicago’s own Ayo Dosunmu told WCIA reporter Bret Beherns that he would meet with the Bulls today.

Former #Illini Ayo Dosunmu just spoke with media from the NBA Combine in Chicago, says he's talked with 13 teams so far: 7 yesterday and 6 more today. Will speak with the Bulls tomorrow. pic.twitter.com/AlfaqcQt5S

Ayo Dosunmu on what he's hearing/outlook going into the NBA Draft:

"Most of the teams I talk to, they're really in love with me, they want to get me out for a workout…I'm in a pretty good position…late in the first round to a contending team, that's going to be a blessing." pic.twitter.com/BS7dJbXcyf

While the Barnes and Cooper interviews gave us some insight on the type of talent this front office is interested in, it remained unclear when the organization spoke with both. Interviews were allowed prior to the draft lottery on June 22nd, meaning the Bulls may have conducted interviews before officially knowing their first-round pick belonged to the Orlando Magic. With that in mind, it was going to be interesting to see if the team would still focus on the first-round talent or switch their energy to players closer to the No. 38 range. Dosunmu’s apparent meeting with the Bulls, however, reiterates that this front office will continue to do its due diligence across the draft board.

Dosunmu has found himself up and down draft rankings throughout his college career. He spent three seasons with the Fighting Illini, most recently helping the program restore national relevancy with a No. 1 seed in the previous NCAA Tournament. Dosunmu’s steady two-way game and clutch play kept him in the running for the National Player of the Year Award all season, and he ultimately was honored with the Bob Cousy Award, which is handed to the NCAA’s top point guard. In his junior season at Illinois, Dosunmu averaged 20.1 points, 6.3 rebounds, 5.3 assists, and 1.1 steals per game.

Dosunmu might have a knack for going downhill, but his general lack of athleticism and explosiveness has certainly played a key role in his inability to vault up draft boards. Questions have also always lingered about his 3-point shot, but he proved some doubters wrong with a solid 39.0 percent clip this season (2.9 attempts per game). What should quickly translate to the NBA is his ability to get to the free-throw line and help lead an offense. Dosunmu can play both on and off the ball, and he is a crafty ball-handler with a high basketball IQ. He may not be best suited to play the lead guard role, but he can be a helpful secondary playmaker who simultaneously provides good size and effort on the defensive end.

ESPN’s rankings place Dosunmu as the 25th best prospect in the draft, which is seconded by Kevin O’Connor’s Big Board at The Ringer. This is exactly the area where I would expect Dosunmu to go on July 29th, with my eyes specifically on organizations like the Los Angeles Clippers (25th), the Denver Nuggets (26th), and the Philidelphia 76ers (28th).

Dosunmu’s upside may not be the highest, but he brings the kind of winning mentality and experience that could plugin immediately to a contending team. And, if anything, those are the kind of qualities that could force a player to actually go higher than projected. I look at teams like the Los Angeles Lakers (22nd) and Memphis Grizzlies (17th) as squads who could prefer the sense of security that a Dosunmu-type would offer.

Do you know who else could use a hardworking, immediately impactful, lengthy defender like Dosunmu? That’s right, the Bulls! I do not at all envision Dosunmu dropping to No. 38, but if he does stay in his projected range, he should not be the hardest prospect to snag via trade. Again, whether or not the Bulls actually have any interest in a trade-up is hard to say, but I do believe that if they were to do one it would be for a prospect like Dosunmu(as opposed to someone in the lottery like Scottie Barnes).