Karnisovas Hits Up the Combine, Interviewing Prospects, Sexton Trade? And Other Bulls Bullets Skip to content 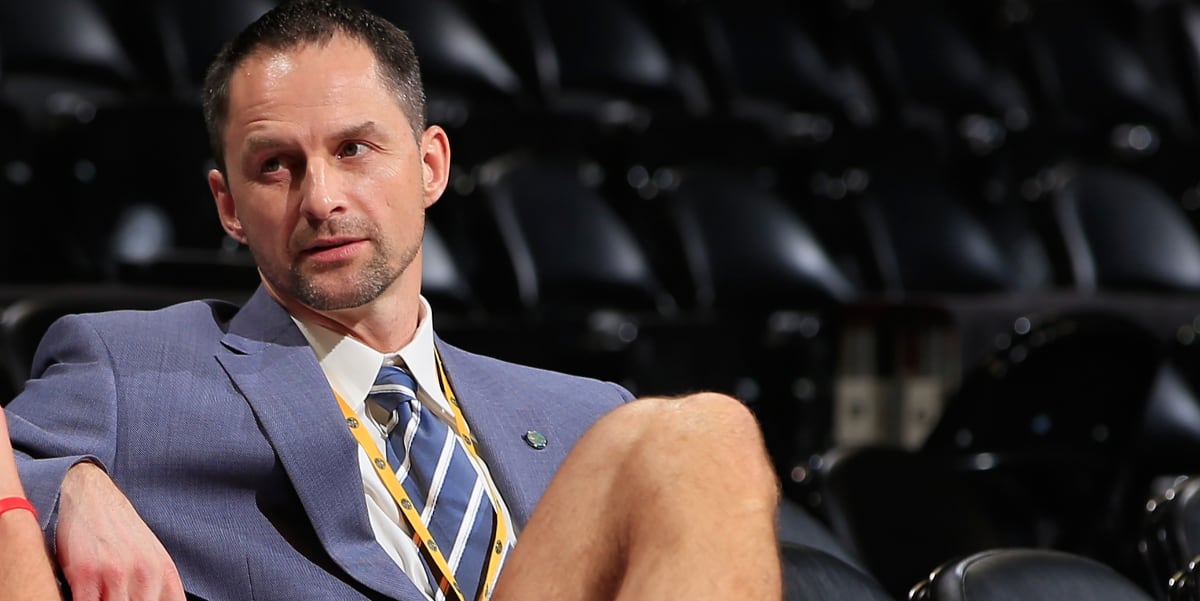 I see London. I see France. I see … Arturas Karnisovas sitting courtside at the NBA Draft Combine in Chicago on Thursday (and assumingly wearing underpants)!

•   The combine has been underway at Wintrust Arena since June 21st, and activities are scheduled to continue through the remainder of the week. The presence of the Bulls’ top executive might feel a bit odd considering the team’s lack of a first-round pick, but we should keep in mind that this is also where a number of second-round and potential undrafted free agent prospects have been showing off their skills. Of course, Karnisovas has also become known as quite the gym rat. He will always do his due diligence by evaluating talent with his own eyes. And, hey, who is to say that process does not influence him to seek out a certain player via a draft-night trade. A handful of prospects spoke to the media over Zoom yesterday, and we learned of two high-profile names who have already spoken with the Bulls.

Hm: The Bulls Have Reportedly Spoken with Projected First Round Picks Scottie Barnes and Sharife Cooperhttps://t.co/QQeD2R1blx

•   To be clear, these interviews could have happened well before the Bulls saw their first-rounder officially handed to the Magic on draft night. But, still, any conversation is a sign of legitimate interest. I also think it is noteworthy that neither Scottie Barnes nor Scarife Cooper is expected to be a Top-4 pick, so even if the Bulls did keep their selection, these are two players they would have likely been able to trade down to acquire. If anything, that kind of makes me more curious about the organization’s interest in potentially moving up in the second round (currently hold the No. 38 pick) or back into the first round. Cooper, specifically, has been hanging out in the mid-20s. I do think he has an intriguing enough skillset to potentially move up some draft boards, but his size (six-foot-one) and iffy 3-point shot (22.8 percent last season on 4.8 attempts per game) could push him in the opposite direction.

•   Keith Smith wrote a good point about the Celtics that directly relates to the Bulls.

Some have asked why Boston is interviewing 1st round players after trading their 2021 1st.

1. They could trade back in.
2. Last chance to legally talk with these guys for at least four years. Relationship building and getting intel matters. That helps in future trades/signings.

•   Even if the team is not going to acquire a first-round talent this season, building relationships in this league is important. The Bulls are trying to rebrand, and we all know players talk. The more positively these players perceive the Bulls organization, the better that should be for their all-around growth.

•   You never know what can happen on draft night. Players might fall. Phones might ring. Offers might be made. Things can turn into utter chaos real quick, and we already have reason to believe that could be the case this time around. According to Sports Illustrated’s Jeremy Woo, the Pistons selecting Cade Cunningham No. 1-overall is “not a done deal.” My gut tells me the cards will still fall this way, but I’d still recommend you read Woo’s report for some interesting info.

•   The other important tidbit from Woo was that the Cleveland Cavaliers (who hold the No. 3-overall pick) have started to look into trades for 22-year-old guard Collin Sexton. While he might be coming off a career season averaging 24.3 points per game, the Cavs backcourt is muddy. Darius Garland, the team’s 2019 Draft pick, is another flashy scorer who can distribute the ball at a much more efficient rate. Seeing a world where the two co-exist was always difficult, and it now appears the organization agrees.

•   Should the Bulls look at Sexton? Probably not. While Sexton’s traditional position is at lead guard, he is a volume scorer. Pairing him alongside Zach LaVine feels like it would make little sense. Not to mention, he is not going to add much on the defensive end, which is an area the Bulls most improve with this PG signing.

•   Do we think former Nike employee Marc Eversley can convince Dallas to trade us a Luka?

Nico Harrison has been pursued for several front office jobs in recent years but thus far remained at Nike. He’s well respected and well connected to many of the game’s best players. https://t.co/3PCZxeDf9a

•   Rick Carlisle to Jason Kidd is … uh … quite something.

George is the seventh player in NBA history to open a postseason with 16 straight 20-point games:

@stephenasmith @KingJames won a championship without any help