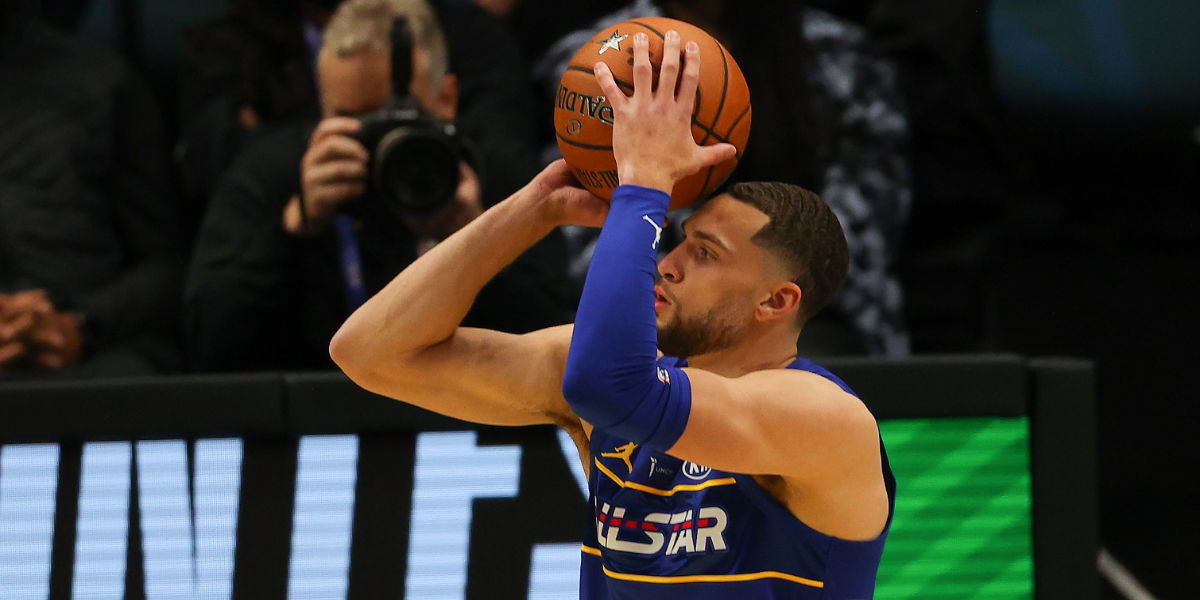 I could be wrong, but I assume if you were to walk into the warehouse of a Home Depot there would be a section jam-packed with those big orange buckets. You know the ones. I picture stacks about six feet high or so and enough rows that provoke an immediate reaction like, “whoa … those are a lot of buckets.”

Well, I can guarantee you that those buckets pale in comparison to those we’ll see at the Olympics!

•   Four of the NBA’s top-10 scorers this season have committed to play for Team USA: Bradley Beal (31.3ppg), Damian Lillard (28.8ppg), Zach LaVine (27.4ppg), and Kevin Durant (26.9ppg). Expand things to the Top-15 scorers in the league, and two more appear on the roster, including Jayson Tatum (26.4ppg) and Devin Booker (25.6). Cumulatively, there were 9,744 buckets scored among these six players, and there are six remaining players on the team who could all offer their own big scoring performances as well (Khris Middleton, Jrue Holiday, Jerami Grant, Kevin Love, Bam Adebayo, and Draymond Green).

•   There is no question this team will enter the Olympic battle as the heavy favorites, but that does not necessarily mean forming the team chemistry will come easy. Certain players are going to have to take a backseat. Sure, that is always the case on Team USA, but the amount of volume scorers on this roster could make establishing a hierarchy that much more challenging this time around.

•   LaVine, specifically, is in an interesting place. While I don’t have any doubt that he has respect among his peers (we know Durant loves him), he also isn’t Lillard or Durant. Not to mention, with his lack of winning experience and lack of playing on such a big stage, the opportunity for him to be a leader on and off the court might not be there. And that’s okay. I think this is a great avenue for him to observe and learn those qualities. Then, he can hopefully implement them next season in Chicago. I also think we will see LaVine use this as a way to develop the other areas of his game. Surrounded by many ball-dominant players, he can focus even more on his playmaking, off-ball movement, and *hooray* defense.

•   FWIW: LaVine technically shot the 3-pointer better than any player on the Team USA roster this season, so I wonder if that could play a role in carving out his niche.

•   Bleacher Report shared a handful of players they believe will have career years next season and failing to make the list was 24-year-old Lauri Markkanen. I’m not going to say I’m surprised, but I will say that I can pretty easily see him having his best campaign in 2021-22. To be clear, I don’t think that season happens if he stays in Chicago. His fits with LaVine has continued to be questionable at best, and his fit alongside Vucevic is about as bad as it can get. However, if he can go to a team that needs him more as an offensive weapon and has a more defensive-minded center that can cover up Markkanen’s lack of aggression, it should not be hard for him to have big year. After all, his best season came in 2018-19 when he averaged 18.7 points and 9.0 rebounds. I don’t think it’s crazy to see him reaching that peak again with potentially even more efficient scoring.

•   Is saying good things about LeBron James while getting #MadOnline Scottie Pippen’s way of selling his bourbon? Bold tactic.

Kyrie Irving averaged 27 pts per game, shot over 40% from deep, and made one of the most iconic shots in NBA Finals history.

•   Speaking of the absolute beast, it looks like he is living his best life (and getting absolutely swole) in LA.

Our NBA brothers showing up and showing out tonight 🤩#RootedinLA pic.twitter.com/QXjZe21Y87

•   Say what you will about Jim Boylen (boy, I know I do), but the guy still has his respect around the league. The NBA has continued to use him as an educator in numerous settings, more recently being front and center at the draft combine. Hey, some guys are just not meant to be head coaches, but that does not mean they can’t find a home somewhere else in the league.

Jim Boylen is back in his element at the NBA Draft Combine, serving as director for the coaching staff and implementing the drills for the players.

Caught up with the former Bulls coach for ⁦@NBCSChicago⁩: https://t.co/CQxrZIWVjx

ESPN story on Chauncey Billups and the Trail Blazers progressing in contract talks expected to culminate in a coaching deal this weekend: https://t.co/8AZMHrlyhp