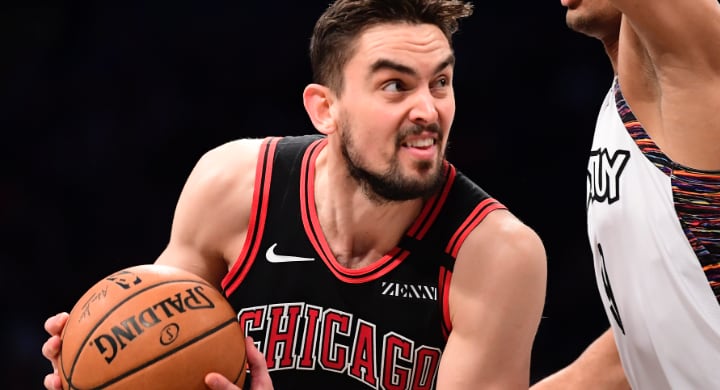 I think it’s safe to say I’ve written the name “Tomas Satoransky” far more than expected this offseason. Not only has the point guard played a key role in qualifying his home country of the Czech Republic for Olympic tournament play, but he also happens to hold one of the key contract decisions the Chicago Bulls front office must address this summer.

Satoransky is on a partially guaranteed deal that will pay him $5 million if the organization lets him walk and $10 million if the organization decides he should return. Considering Coby White’s offseason shoulder injury and the team’s clear lack of a true facilitator, I don’t think it is at all crazy to see the Bulls favor Satoransky’s experienced and grounding presence. After all, his assist-to-usage percentage has ranked in the 96th or higher percentile in three of the past four seasons (99th in 2020-21), per Cleaning the Glass. And while he may not be the most motivated scorer (7.7 ppg), Satoransky did at least carry a very efficient 58.8 percent effective field goal percentage this past season. So even though he may not be the answer for the Bulls at starting point guard, he could be considered an above-average piece off the bench. In fact, that exact reason is why I also would not be surprised to see the Bulls test his value on the trade market in the coming months.

I don’t think a return for Satoransky would be particularly special, but having another team take on his contract situation would give the front office that much more financial flexibility for their roster overhaul. And, according to Chris Forsberg of NBC Sports Boston, there might be a reason to believe a franchise like the Celtics could be that team.

Boston’s ability to use those exceptions would likely be limited to acquiring players currently under contract. Here’s one example to consider: Could the Celtics engage the Chicago Bulls on veteran point guard Tomas Satoransky, who is on a partially guaranteed $10 million deal this season? The Bulls could use some financial flexibility and Boston could take Satoransky back into the remainder of the Hayward exception while adding some needed size and experience at the point guard spot.

No, Forsberg is not directly reporting that the Celtics have an interest in Satoransky, but he is right in saying that a hypothetical trade could make sense for both parties. I know it feels weird to get rid of a decent facilitator and multi-positional player when those are two areas where Chicago is starving for depth. However, we should remember that it’s only a matter of time before Arturas Karnisovas and Marc Eversley make this entire roster their own. The trade deadline demonstrated a clear eagerness to reconstruct, and the money scheduled to go into Satoransky’s pocket would help the front office continue that process.

Boston is also a potentially interesting trade partner due to their recent front-office shake-up. Head coach Brad Stevens moved into the president of basketball operations role this offseason, and he acted fast to trade Kemba Walker to the Oklahoma City Thunder for Al Horford. Karnisovas would be wise to see how eager Stevens is to make other moves. We have already written about the speculation surrounding guard Marcus Smart in Boston. Satoransky surely would not be the centerpiece in a deal for that caliber of player, but he could always be an important puzzle piece.

Similarly, we already know the Bulls tried to offer Satoransky to the Pelicans in a trade for Lonzo Ball around the deadline. This was not enough to spark New Orleans’ interest (I know, shocker), and I doubt it would be this summer either, but that does not mean he still can not be included in a potential final deal.

The other teams I would call if I were Karnisovas are the Los Angeles Clippers, Los Angeles Lakers, and Denver Nuggets. All three will look to stay in the contender spotlight next season, and all three could find themselves with a gap at the point guard position this summer. The Clippers have been searching for better floor generals the past two years, and while the rise of Reggie Jackson in the playoffs was encouraging, he is headed toward unrestricted free agency in August. The Lakers have starting point guard Dennis Schroder (who is hunting a big pay raise) and backup guard Alex Caruso hitting unrestricted free agency as well. As for the Nuggets, Jamal Murray will still be rehabbing his torn ACL next season. Backup Facundo Campazzo struggled at times to carry a big workload, and it forced the franchise to sign Austin Rivers through the remainder of the season.

Again, I don’t expect any of these teams to offer significant compensation for Satoransky’s services, but Karnisovas might be willing to take whatever he can get if it means (1) more flexibility and (2) constructing a roster that falls more in line with his vision (which … we still have yet to fully learn).

All three of these teams also hold a late-first-round pick, and we do know the team is reportedly prepared to consider a trade into the first round if an opportunity presents itself. The Lakers pick 22nd, the Clippers pick 25th, and the Nuggets pick 26th. Satoransky alone would not be enough to pry one of those away (unless he single-handedly carries the Czech Republic to its first gold medal), but perhaps the Bulls begin to offer a handful of seconds or Thaddeus Young and the conversation starts to flow.

I expect this post somewhat resembles the thought exercise going on at the Advocate Center. Karnisovas made clear that he will look at all paths to improve this team and make changes, and Satoransky seems like a player that could be part of that process.