The Bucks Did Their Best Bulls Impression, Magic HC Search, Select Team Injuries, and Other Bulls Bullets Skip to content 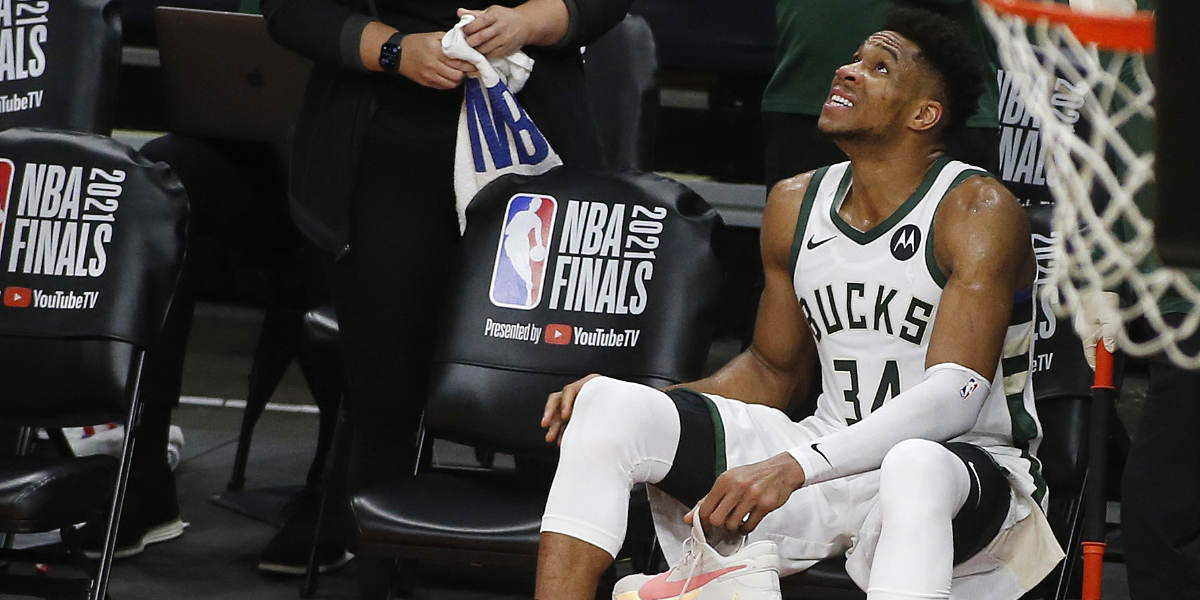 In game 2 of the NBA Finals, one player hauled his heroic ass from start to finish while carrying the heavy majority of the offensive workload. Yet, it was still not enough to avoid a double-digit loss. Where have I seen that before?  *Somewhere Zach LaVine Shivers*

•  Giannis Antetokounmpo finished last night’s game with 42 points and 10 rebounds. The 20 points he scored in the 3rd quarter were the most in a single NBA Finals frame since Michael Jordan in the 1993 NBA Finals. Considering he looked to be down for the count just eight days prior with a gruesome knee injury, the individual performance felt all the more spectacular. Meanwhile, as Antetokounmpo shined through his clear exhaustion, Khris Middleton and Jrue Holiday did their best impression of the Bulls supporting cast. In other words, the two failed to step up on the offensive end quarter after quarter after quarter. Middleton and Holiday shot a combined 12-37 from the field. The two were also a combined -17 when on the floor, and Antetokounmpo was the only player to finish with a positive plus-minus on the team at +3. Brutal.

Giannis drops 20 in the 3Q (most in an #NBAFinals quarter since Michael Jordan in 1993) en route to an #NBAPlayoffs career-high 42 PTS. #ThatsGame

•   Last night’s game reminded me most of the Bulls matchup with the Atlanta Hawks on April 9th. LaVine dropped a historic 39 points in the first half before finishing the night with his first-career 50-burger. The Bulls lost 120-108. Tomas Satoransky had 0 points, Thaddeus Young had 4 points, and Lauri Markkanen had 5 points. When the final buzzer sounded, it was almost impossible not to feel utterly horrible for LaVine. And while I don’t have a dog in this fight, I could not help but feel close to the same feeling for Antetokounmpo last night.

•   The good news for Milwaukee is that Middleton and Holiday are still All-Star-caliber players. With a trip home now on the schedule, they may find themselves right back in the mix by the end of the weekend, but their margin of error might as well be as small as ever. The Bucks can not afford for Middleton and Holiday to shoot a combined 32 percent. Getting back into this series truly feels as simple as that.

•   To be fair, it also does not help that the Suns can kill you from practically anywhere on the floor. Last game they shot 25-26 from the free-throw line, and this game they went a ridiculous 20-40 from the 3-point line. The Athletic wrote more about that absurd success from downtown.

•   Overtime Elite is a new professional basketball league for young players looking to hone their craft before taking the next step. It’s supposed to serve as an alternative for college, and the organization just signed its highest-profile prospect yet. Jalen Lewis chose a $1 million-plus deal (duh) over blueblood programs like Kentucky and Duke.

•   This would be a great hire for the Orlando Magic, but a “meh” landing spot for Jamahl Mosley. The Mavs assistant has been in the running for multiple positions around the league, and Orlando is easily the most underwhelming gig available. On the bright side, this specific position could offer a bit more long-term security as he becomes a strong part of the organization’s rebuild.

Detroit Pistons center Isaiah Stewart suffered an ankle injury while playing for the USA Select Team in a scrimmage against Team USA today, sources said. He left the game to get treatment.

Immanuel Quickley, PJ Washington and Miles Bridges of the USA Select Team are out of training camp in Las Vegas due to COVID protocols, sources said. All members of Team USA were at practice today.

•   I swear, Team USA better protect Zach LaVine and Patrick Williams at all costs. While I love everything about this opportunity for both players, there is no denying that it increases the risk of serious injury. This new Bulls regime does not need any more of that infamous bad luck.

From a Busy Rookie Year to Team USA Training Camp, Patrick Williams is Soaking it All inhttps://t.co/nEFDHZ5JJN