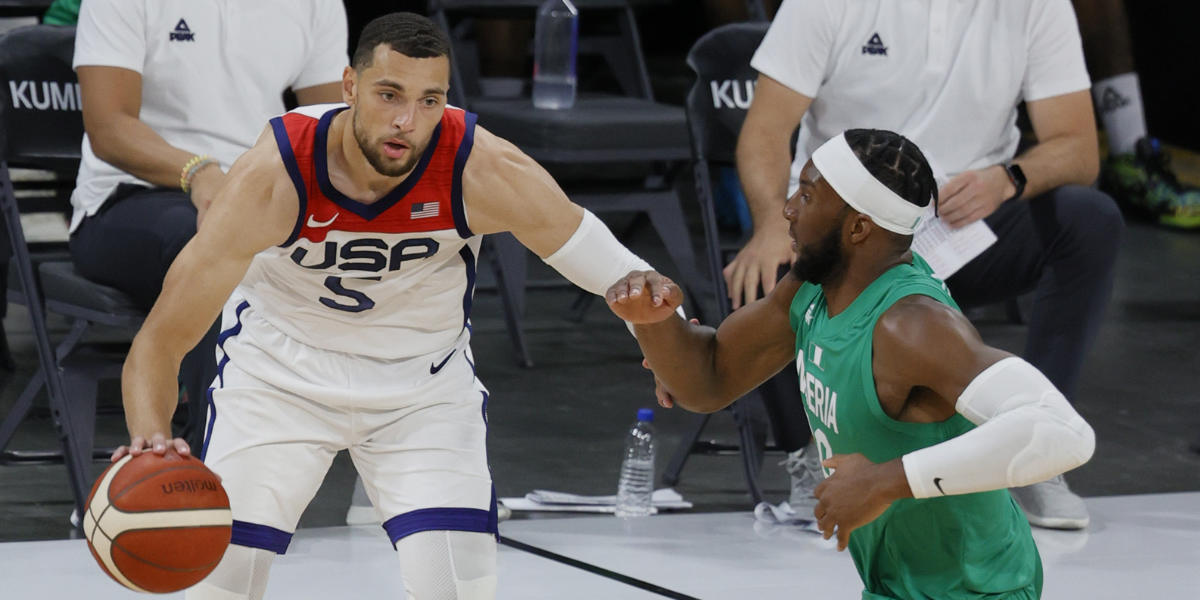 •   Team USA lost to Nigeria on Saturday 90-87 in one of the most shocking international basketball upsets in quite some time. Led by head coach Mike Brown, Nigeria sank 20 three-pointers compared to Team USA’s 10-24 performance. Gregg Popovich’s crew showed a clear willingness to share the offensive wealth (six players finishing the night in double figures), but when the time came to earn defensive stops and convert some of the biggest buckets of the night, the team had worse chemistry than most highschool homecoming dates.

•   Of course, that is not to say Nigeria should not receive the majority of the credit. The team was not only unconscious from downtown, but they played smart and aggressive defense that caught this indecisive Team USA off guard. While this exhibition performance may not show up in the official win-loss column, there is no question it will make an impact on this year’s Olympic field, specifically Group B.

Groups for Men's Basketball at the Olympics:

Top-2 finishers from each group and the two-best 3rd place finishers advance to the tournament phase.

•   Fortunately for Team USA, there are four more exhibition games to learn how not to suck. While the country normally dominates any and all international meetings, last night is the exact reason these exhibition games exist. The loss should be a reminder that individual talent is not going to win a team game. This group has to learn to play together, and they also have to respect their opponent. I expect to see a different spark from this team tomorrow night when they play Team Australia, and it sounds like Coach Pop feels the same.

USA Basketball's Gregg Popovich after stunning exhibition loss to Nigeria: "In a way, I’m kind of glad it happened. That means nothing if we don’t learn from it. It could be the most important thing in this tournament for us."

•  Did Zach LaVine win Team USA the game? No. Did Zach LaVine lose Team USA the game? Also, no. The Chicago Bulls All-Star played fine in his debut on the world stage. He finished the night with 10 points on 4-8 shooting from the field in 21 minutes of action. With guys like Kevin Durant (17pts, 4-13 FG), Damian Lillard (14pts, 4-10 FG), and Jayson Tatum (15pts, 4-5 FG) on the floor, it was clear going into this gold medal chase that LaVine’s normal offensive workload would take a hit. We appeared to see LaVine recognize this in the team’s first competitive matchup, as he spent a good chunk of the game initiating the offensive and showing encouraging defensive effort.

•   Still, I saw several Bulls fans try to throw this shocking outcome on LaVine’s lap, which I find entirely unfair. Any anger likely stemmed from the fact that LaVine was the one who had the ball in his hand in the final seconds. The team tried to run a play for him to set up a potential game-tying shot, but Nigeria was all over the basketball. Not to mention, the whole final sequence felt far too time-consuming. Roughly 10 seconds ran on off the clock as LaVine and Lillard tried to execute. They have to chuck up a shot quicker.

Salute to Nigeria. They hooped. Played with confidence and that grew throughout the game. Team USA couldn't score, Nigeria was able to get up and down and Nigeria couldn't miss from deep.

•   I guess you can be upset about LaVine unintentionally missing the first of two subsequent free throws, but the game was over before he went to the line. Even if he makes the first and misses the second like he planned to do, we all know the chance of grabbing the offensive rebound and converting the quick score is rare. At the end of the day, Team USA should not have been relying on those small odds anyway.

•   The question now is what kind of adjustments will we see made tomorrow night? Will the starting lineup be the same? Will LaVine see more or fewer minutes? Will one player step up as the go-to offensive weapon? With guys like Patty Mills, Joe Ingles, and Matisse Thybulle on Team Australia, nothing about this second exhibition game will be a cakewalk.

•   Honestly, this may have been the moment the basketball gods decided it was Team Nigeria’s night.

•   Jamal Crawford did what now?

•   The Crawsover Pro-AM event is back in Seattle after a one-year hiatus due to the pandemic. The 41-year-old Crawford looked like his young self against a group of up-and-coming and professional hoopers. According to The Seattle Times, LaVine (a Washington-native and long-time friend of Crawford) was supposed to take part in the event this summer, but I guess the dude is busy.

•   Where does Tim Duncan rank all-time? If you say outside the Top-10, you’re wrong.