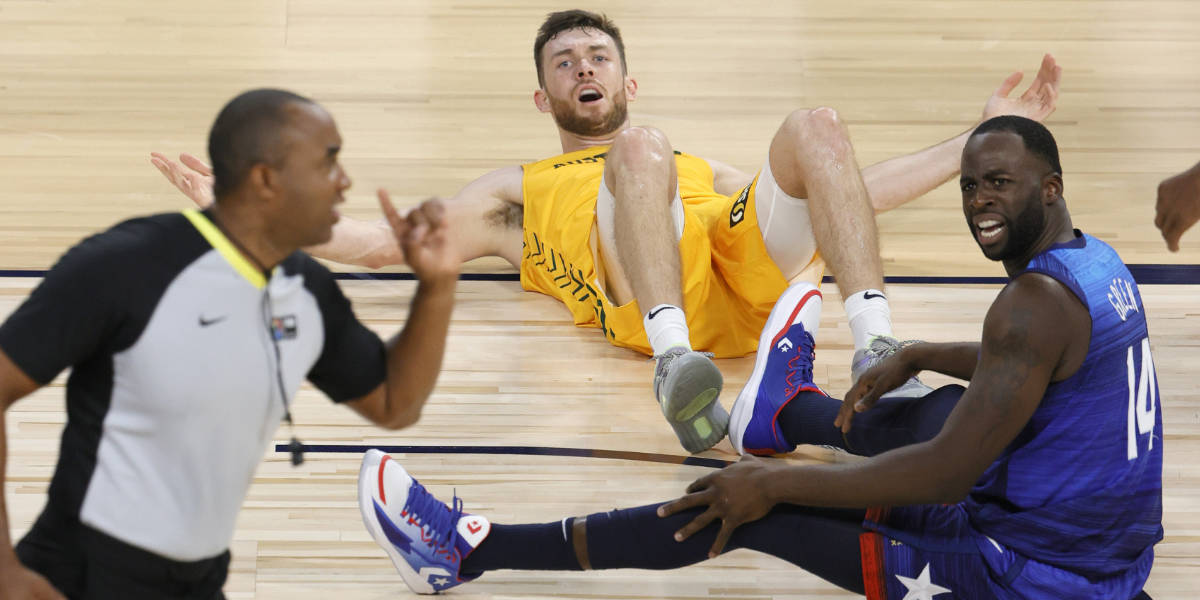 I have never seen my Dad get his ass kicked. And, to be quite frank, I don’t expect I ever will. Not only do I think he possesses a pretty elite physical frame (6’3″ and an undisclosed weight), but he is my Dad. I think it is just somewhere in the Son Code of Conduct that you typically view your father as one of the strongest human beings to ever touch the planet. AKA someone that no one should mess with. After all, who else could shut down an idiot trying to cut in line with one measly glare? Who else could single-handedly move that couch across the house (albeit while sweating profusely)? Who else could catch a foul ball with one barehand and act like it doesn’t hurt a lick!? Just dad, that’s who.

With that said, if I had to imagine how I’d feel if my Dad were to get his ass kicked, I think it would be practically identical to the way I felt watching Team USA go 0-2 in its first two exhibition games. A roster constructed of Kevin Durant, Damian Lillard, Bradley Beal, Zach LaVine, Bam Adebayo, Draymond Green, and several other All-Star-caliber players seems pretty damn invincible. But then Dad got punched … twice.

Watching the team fall to its knees did not provoke a feeling of disappointment or anger, but rather confusion and concern. Is Team USA not as tough as we once thought it was? Is dad okay?

•   At the end of the day, Team USA still gets to hang its hat on the exhibition label. While these games might be remembered by fans, they hold no real impact on the country’s shot at another Gold Medal. Now, at the same time, momentum can be a powerful thing, and Team USA has gained practically none of it thus far.

Dame Time struck early, and the Americans held a nine-point halftime lead. But a sloppy second half sinks them. Patty Mills (22 pts, 4 ast), among others, played hero.

•   The more the Olympic field watches Team USA appear mortal in Las Vegas, the more confident they will be when it’s time to matchup in Tokyo. As for Team USA, the more time they spend losing in the states, the more time they spend searching for answers. The last thing Team USA wants to do is get on the plane without an on-court identity, and right now they run the risk of doing just that. The lack of any established roster hierarchy or team chemistry is painfully clear.

•   Despite having four of the NBA’s top-10 scorers in the league, the offense has been hard to come by. Too many times already have we watched things turn into an ISO party on that side of the ball, making the absence of a more traditional facilitator perfectly clear. Likewise, the team’s lack of size down low has proven problematic. Team USA has been outrebounded in both contests so far. Big man Kevin Love did not even touch the floor in the second exhibition against Australia. With the roster set, these are two areas head coach Gregg Popovich is going to have to improve by using the talent he has. Considering these are some of the most gifted athletes in the world, doing just that is more than possible. However, it is also going to take complete buy-in, and I’m not sure if we have that from this roster.

•   A postgame session like this makes the whole thing feel that much worse.

Gregg Popovich gets into exchange with reporter after Team USA's loss to Australia. pic.twitter.com/5XEp114qIh

•   Zach LaVine saw significantly fewer minutes in his second game off the bench. After playing 22 minutes with 10 points on Friday night, LaVine only scored 5 points in 13 minutes of action. Does this mean anything? Eh, hard to say, especially when we consider the team faced another loss. I think we will continue to see a lot of rotation tweaking up until it’s time to leave for Tokyo. You can check out the full box score here.

•   Bobby Portis had plenty of nice things to say about the Bulls in an interview with The Athletic, and it sparked a conversation about a possible reunion on Monday. Just as interesting as those comments, though, was the reflection on the Nikola Miortic incident. Portis broke Mirotic’s jaw back in 2017 during an altercation in practice. Rumors swirled that Portis took a bit of a cheap shot at his teammate, but he explained things a tiny bit differently: “Me and Mirotic, we always got into altercations. That wasn’t our first time. The guys in the front office knew that. That one was a little different. Some of the things that got misconstrued was that I sucker-punched him or whatever. The guys that were there at the time, they knew what happened. If it was that serious, they wouldn’t have offered me a contract extension. I think that kind of sums it up right there.” I’m not trying to say what Portis did is fine, but he kind of has a point. The Bulls did look to keep him after that, and his teammates seemed to remain by his side.

Cameron Payne in the playoffs, shooting in the restricted area:

•   Between a possible spot on the Trail Blazers coaching staff to a pro golf victory, Vinny Del Negro is in the new more than expected recently.