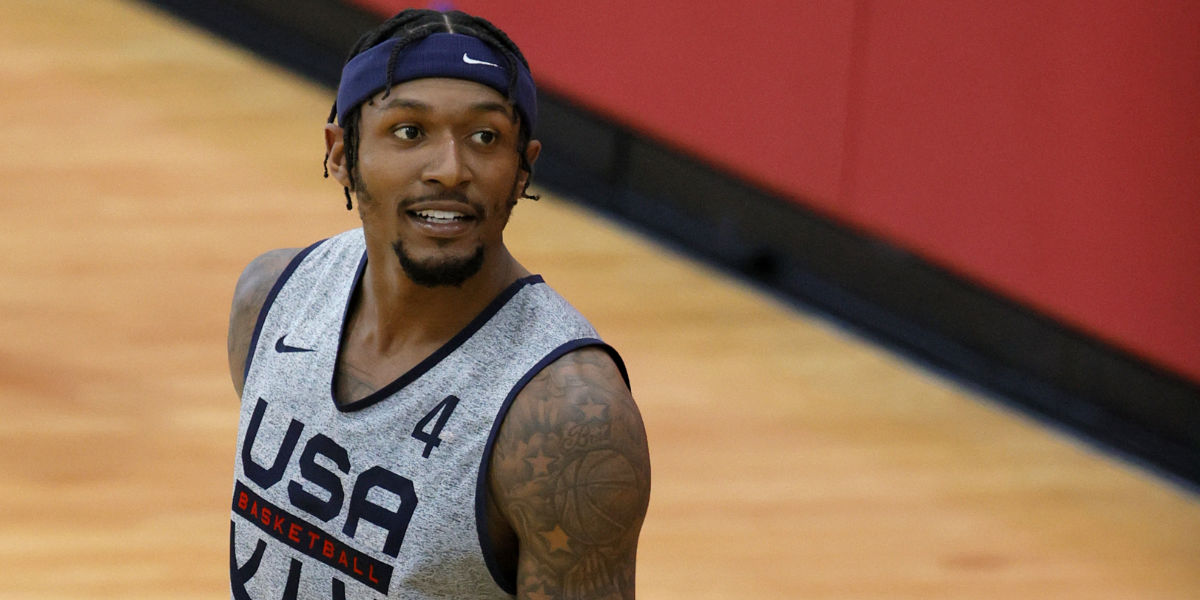 News dropped on Wednesday night that All-Star guard Bradley Beal had to enter health and safety protocols while with Team USA. Now, USA Basketball has officially announced that Beal will miss the 2021 Tokyo Olympics entirely, and a search for his replacement has begun.

Bradley Beal, who was placed under USA Basketball's health & safety protocols on Wednesday, will remain in protocol & will be unable to participate in the Tokyo Olympic Games.

Out of an abundance of caution, Jerami Grant has been placed under health & safety protocols.

USAB confirms that Bradley Beal will not travel with the team to Tokyo. And, out of "an abundance of caution," Jerami Grant has been placed in the health and safety protocols. Beal will be replaced on the roster. https://t.co/B8lzrBkoch

Beal is not the first player at Team USA training camp who had to enter quarantine.

Last week, we learned three Select Team members – Immanuel Quickley, Miles Bridges, and PJ Washington – faced the same situation. Then, earlier this morning, The Athletic’s Shams Charania reported that forward Jerami Grant also entered health and safety protocols. According to USA Basketball’s release, however, there seems to be some optimism that Grant could return to the 12-man roster since he entered protocols out of “an abundance of caution.”

First things first, this super-duper sucks for Beal. The league’s second-leading was in line to play a significant role in Team USA’s gold medal chase. Not to mention, he clearly seemed excited to represent his country and play alongside his St. Louis pal Jayson Tatum. I hope the guy is feeling okay, and I wish him a speedy recovery.

Due to Beal’s unfortunate absence, we have plenty of reason to believe Zach LaVine could see an even more significant role. ESPN’s Brian Windhorst already tagged the Bulls All-Star as the player head coach Gregg Popovich could look to fill Beal’s shoes. We should also keep in mind, however, that Khris Middleton, Jrue Holiday, and Devin Booker are expected to join the team following the conclusion of the NBA Finals. All three of those players are bound to eat up their own fair share of minutes, which should make the rotation in Tokyo that much more interesting.

The expected addition of those three players should also influence which direction Team USA goes when hunting for a Beal replacement. Draymond Green, Bam Adebayo, and Kevin Love are the only players who have real experience playing the five. The team could go small with Kevin Durant in the mix, but that is certainly asking him to do a lot. With that in mind, there is already speculation that Team USA will add another more physical and defensive-minded power forward. Exactly who that could be, though, is hard to say.

Considering the Select Team players have been in practices and around the official squad, it feels like this is where we could find Beal’s replacement. Keldon Johnson, Saddiq Bey, and Darius Garland have already suited up on the sideline for the exhibition games. So I think it’s fair to wonder whether or not it could come down to one of those three.

I’m not exactly sure how this process works, but I have to imagine it is technically also possible for them to call upon someone who is not already in Las Vegas. A 57-man preliminary Team USA roster was announced well before we knew about the official 12-man roster. Maybe managing director Jerry Colangelo would return to that list and throw out an offer to guys like Julius Randle, Jarrett Allen, or Christian Wood.

Personally, and this is totally not biased at all, Patrick Williams seems like a good choice to me! As a versatile defender who hustles his ass off and seems extremely coachable, what’s not to like? Call ’em up, Jerry!