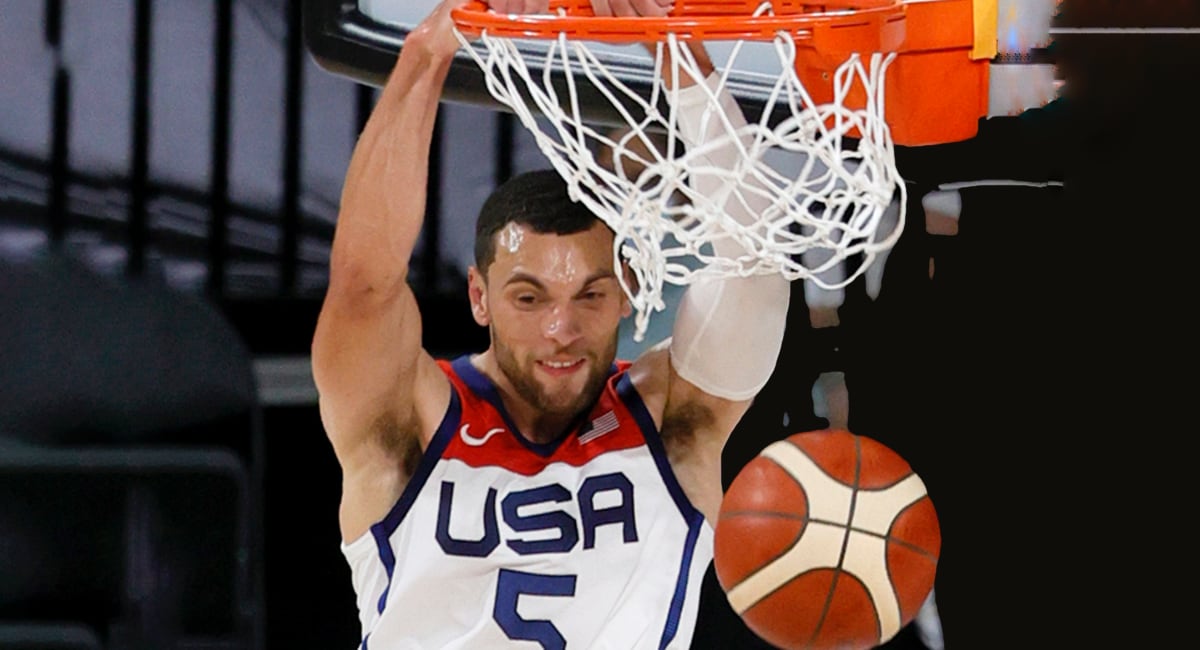 Normally, I don’t get too discouraged by a Monday. The start of a new week means a new opportunity to be productive! Today, however, I feel like Garfield. I just want to sit around hating the day and eat a gross amount of lasagna. Is that too much to ask?

Whatever. Maybe some Zach LaVine highlights will get the juices flowing!

•   The Chicago Bulls All-Star has started two exhibition games so far, and the uptick in playing time has come with an uptick in production. LaVine played a key role in the team’s 83-76 win last night over a tough Spain squad, finishing the night with 13 points and 2 assists. He also hit three buckets from downtown in the fourth quarter to help Team USA gain a comfortable lead.

•   LaVine also had two big slams in the final minutes. He pulled off one bulldozing dunk in transition before grabbing the easy alley-oop on the fastbreak from Kevin Durant. This awesomeness reminds me, I still need to order a Team USA LaVine jersey.

•   Every time I see LaVine even touch the ball on Team USA, I feel stupidly proud. Never have I once met LaVine, nor is he probably aware of my existence, but I am still so happy to see his career arc finally hit this upward trajectory. The guy has undoubtedly put in the work – let alone, paid his dues – so it is a pleasure to watch all of that payoff. I look forward to seeing what kind of noise he can make on the world stage later this week.

•   I also look forward to seeing Arturas Karnisovas and Marc Eversley build LaVine a better roster in the coming weeks. No pressure! Whether it be his All-Star nod or his big Team USA buckets, LaVine has carried his own weight. The guy is ready to take the next step competitively, and the organization needs to show him they are ready too. Fortunately, AKME does seem to be in that mindset, as a report recently stated the Bulls would be “big spenders” when free agency opens up during the first week of August. How big is big? That’s a question only time can answer. But I do tend to believe we will see at least one significant move made. After all, how could there not be when the Bulls have NINE roster spots to tweak. ESPN listed each team’s free agents this summer, and I recommend you familiarize yourself as August approaches. Here are the Bulls: Lauri Markkanen, Daniel Theis, Dezenl Valentine, Garrett Temple, Ryan Arcidiacono, Cristiano Felicio (yes, his contract is finally up), Javonte Green, Adam Mokoka, Devon Dotson. Keep in mind, Markkanen, Green, Dotson, and Mokoka are restricted.

•   Speaking of significant moves, The Athletic’s Alex Schiffer and Sam Vecenie wrote about a hypothetical trade that we have already given some thought to in the past: Spencer Dinwiddie for Thaddeus Young. I’ve waffled on Young’s future with the Bulls quite a bit this offseason. While I love his veteran leadership, and I do think he has plenty left in the tank as a worthwhile role player, I would not mind parting ways with the 33-year-old if it meant signing a more long-term piece. Dinwiddie might not be my priority at point guard, but I do he would fill the Bulls’ gap at the position more than adequately. He plays a solid downhill game that gets him to the free-throw line and would take some key offensive pressure of Zach LaVine. Likewise, he offers solid size at lead guard (6’6″) and carried a 34.6 assist percentage in his career 2019-20 season, which ranked in the league’s 97th percentile. Health is of course a concern (coming off partially-torn ACL), but if he looked for a multi-year contract that netted him roughly $14 million a year (same as what Young is owed this season), I’d be pretty darn comfortable striking a deal with Brooklyn.

•   Also, for those worried about how LaVine might take a possible Young departure, here is what he told NBC Sports Chicago’s Rob Schaefer in a recent one-on-one interview: “You know, whatever happens, obviously me and Thad’s relationship is bigger than just basketball. That’s like my bigger brother. I want whatever’s best for him and whatever’s best for the team.” Make sure to read the whole interview here, if you haven’t already.

•   A handful of fans might not know Keldon Johnson, but I liked his addition to Team USA. A young player still trying to prove himself in this league, he should light a fire under some of his All-Star teammates.