Bruh: ESPN is Not Kind to the Bulls in Their Early 2021-22 Power Rankings Skip to content 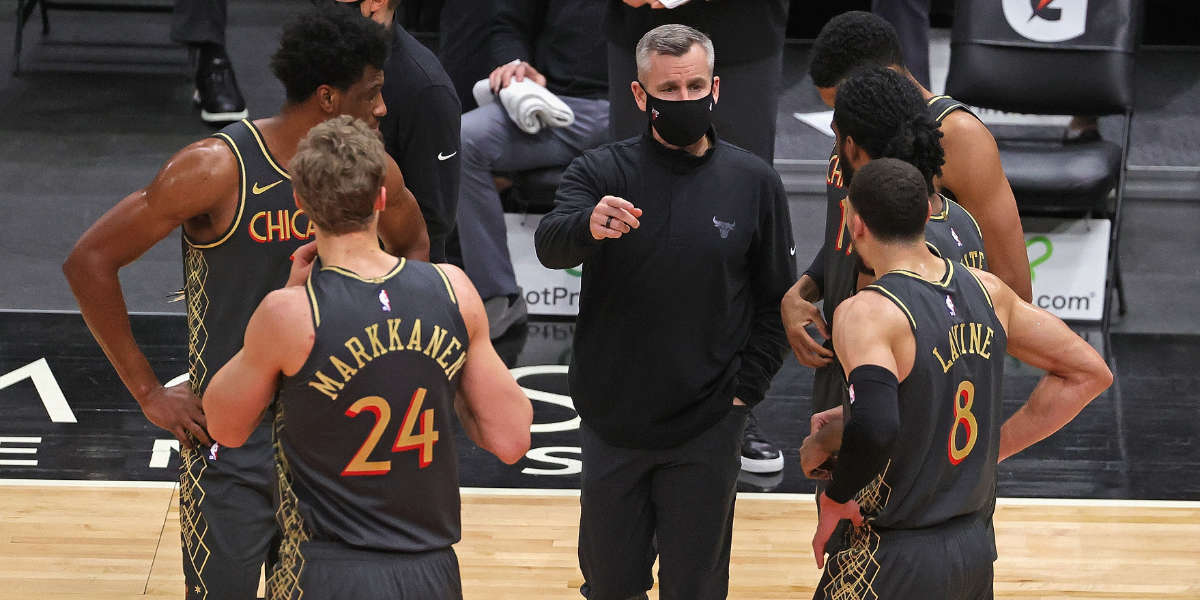 With the NBA Draft just over a week away, and free agency scheduled to start four days after that, several teams could look significantly different heading into the 2021-22 season. One of those teams could very well be the Chicago Bulls. While fans know to expect a nucleus built around Zach LaVine and Nikola Vucevic, there is a lot of wiggle room on the rest of the roster.

The Bulls could have up to nine roster spots to tinker with this summer. The expectation is that at least one or two familiar faces will refill their hole on the roster (guys like Thaddeus Young and Tomas Satoransky), but Arturas Karnisovas and Marc Eversley made it clear at the trade deadline they are not afraid to acquire fresh faces.

With all of that in mind, a smart person would not give any thought to those way-too-early power rankings for the 2021-22 season. But, unfortunately, I’m an idiot.

ESPN released a very premature power ranking for next season, and the Bulls sit at an extremely underwhelming 23rd-overall. The site ranks them behind several fellow teams that missed the playoffs, including the Raptors, Pelicans, and Spurs. Here is a look at the 20-30 range:

Check out the full rankings here.

The Athletic sent out their final end-of-season power rankings, and No. 23 is exactly where the 2020-21 version of the Bulls landed. In other words, ESPN projects them to see zero improvements in the standings even with a full season of LaVine and Vucevic. Why? Well, here is what writer Nick Friedell had to say.

The Bulls took a big swing when they traded for veteran big man Nikola Vucevic at the deadline, but it didn’t pan out the way the organization hoped. Now the Bulls have to find a way to improve without a top-10 pick this year (not to mention another future first-rounder headed Orlando’s way) while big cap questions persist … Chicago remains in the middle of a rebuild, but it is unclear how much it will be able to improve without the draft capital that most young teams use to improve.

I understand the end of this season did not go as played. But are we completely forgetting the context? Zach LaVine missed a pivotal two weeks, and the team had only two full practices over the final 29 games. Also, why are pretending like they still did not improve the quality of the roster with that trade? Yes, the organization needs to make more upgrades, but we can not write off the significance of adding an All-Star center in just 29 games. This trade alone makes the team better heading into next season.

Also, it is totally fair to have some concern about the Bulls losing their first-round pick this season, but that also is not the only way for them to add talent. The franchise has the flexibility to open up decent cap space this offseason if they desire. Karnisovas has also shown he is not afraid to hit the trade market hard to find the pieces he wants. Again, losing a first closes a door, but there are others still open (and, you know, they have Vooch). Karnisovas talked more about that at his end-of-season press conference.

I’m sure if the organization does add the much-needed facilitator and a couple of improved role players, they will be the recipients of a nice bump up the rankings. However, I still feel like their starting point should at least be a play-in tournament team. After the trade, they were 7-8 in games with LaVine and Vucevic. Also, let’s not forget LaVine played hurt in several of those 15 games. Hell, at least put them with the last play-in spot in front of the Spurs and Raptors!

Ugh. All right. I’ve wasted enough energy on this. I’m very curious to see where the Bulls land in the national spotlight one month from now. I don’t expect them to pull off a league-changing move, but I do expect a nice overall roster boost. We’ll meet again, ESPN.