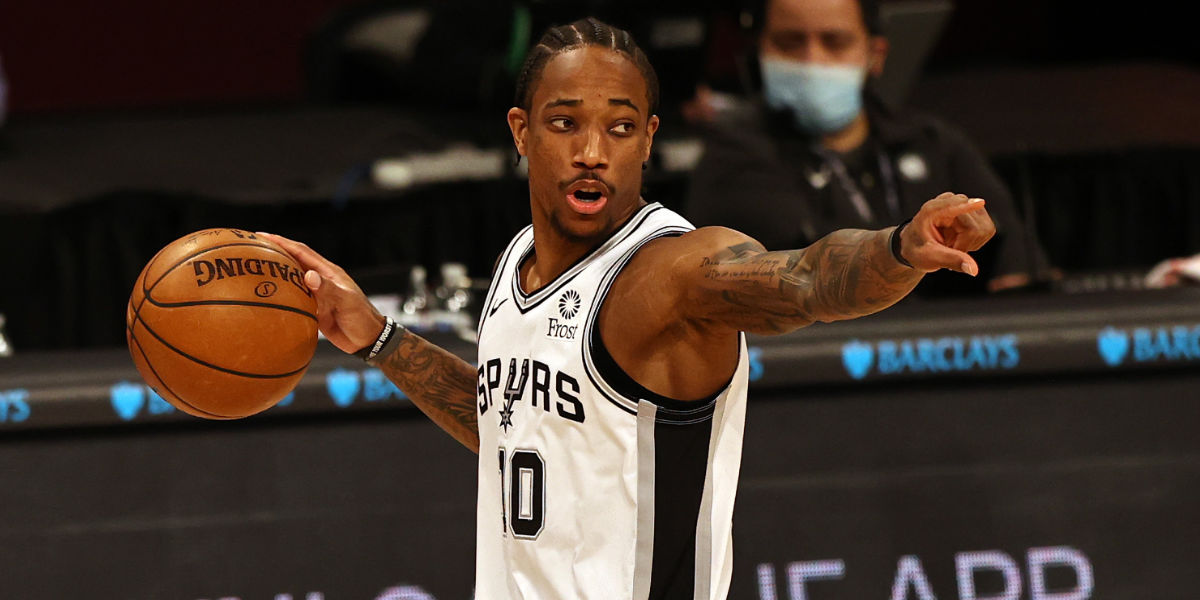 The Chicago Bulls are interested in a potential sign-and-trade for DeMar DeRozan, according to ESPN’s Brian Windhorst, who shared the news in his latest appearance on The Jump.

.@WindhorstESPN on Chicago being interested in both Lonzo Ball and DeMar DeRozan:

"From what I am told, [the Bulls] are also interested in DeMar DeRrozan, and are interested in pulling off a possible double sign-and-trade where they would send Lauri Markkanen to San Antonio." pic.twitter.com/b6bM9iATsy

Last week we learned DeRozan could be on the Bulls’ radar after comments made by ESPN’s Marc J. Spears. The organization was also briefly attached to the four-time All-Star at the trade deadline before news broke that they added big man Nikola Vucevic.

I’ll be honest, I’m very surprised we continue to hear DeRozan’s name mentioned around the Bulls. A fellow ball-dominant wing who plays subpar defense and struggles to hit the 3-pointer does not feel like the best pairing alongside Zach LaVine and Nikola Vucevic. At the same time, DeRozan has taken a step in the right direction as a distributor over the past few seasons, and he does provide an ability to get to the free-throw line the Bulls desperately need. We also can not deny that if the team somehow added DeRozan AND Ball, that Chicago would be vaulted immensely up the Eastern Conference ranks.

Windhorst presents the idea of a possible double sign-and-trade between the Bulls and Spurs that includes Lauri Markkanen for DeRozan. San Antonio has been presented as a possible suitor for Markkanen several times, with a report in April by Bleacher Report’s A. Sherrod Blakely even stating that the franchise would make a “strong push” for the 23-year-old this summer. The problem with this is that Markkanen has already been rumored as a potential necessity in adding Ball. A three-team deal between the Hornets, Bulls, and Pelicans has floated around that send Markkanen to Charlotte. Could Tomas Satornasky get the deal done instead of Markkanen? That would have to be the hope.

We also can not forget that DeRozan has plenty of interest around the league, with teams like the New York Knicks and Miami Heat (who are expected to bring in DeRozan’s close friend Kyle Lowry) reportedly expressing interest. With that being the case, we have to wonder how strong of a fight the Bulls are willing to put up.

An alternative is that the Bulls’ interest in DeRozan is strictly as a backup plan to Ball. Jake Fischer seems to suggest this as a possibility in his latest intel post for Bleacher Report.

There’s a strong sense around the NBA that the Bulls will extend a four-year, roughly $80 million offer sheet for Lonzo Ball. However, Chicago brass did contact executives and personnel around the league over the weekend, sources told B/R, exploring contingency plans centered around Schroder, DeMar DeRozan and Richaun Holmes should the Pelicans proceed to match the Bulls’ offer.

Man … things are getting straight-up crazy. I have no idea what to expect at 5:00pm, and there are already so many moving pieces. I’ll try my best to stay on top of it all!