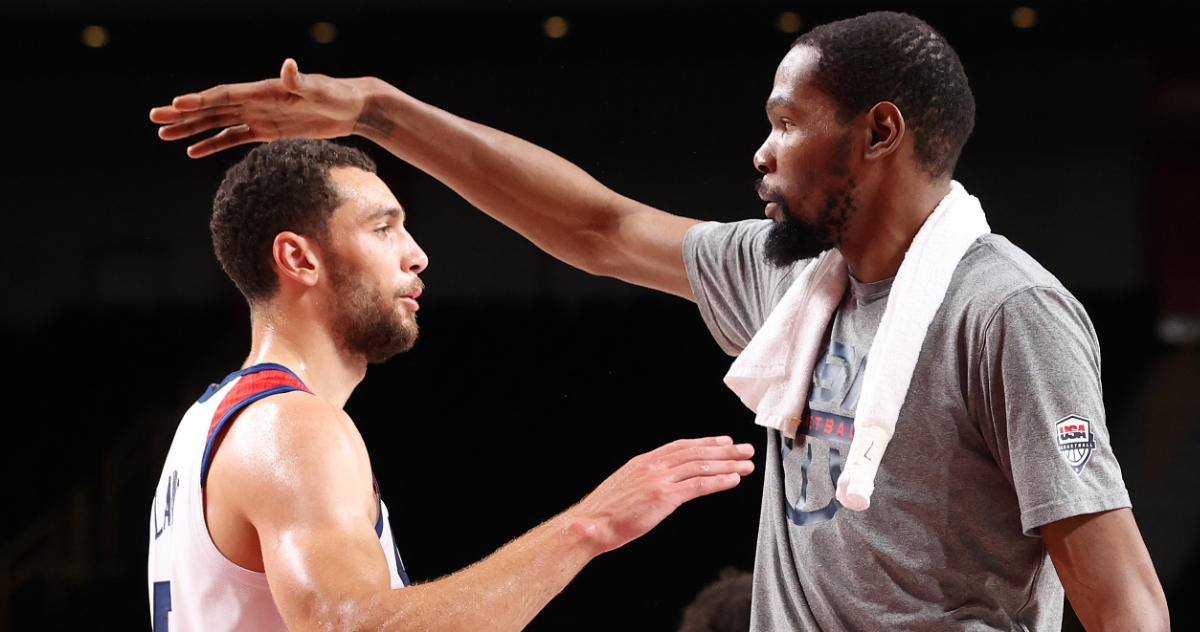 Zach LaVine must be having quite the week.

After learning he will officially join forces with Lonzo Ball and DeMar DeRozan next season, LaVine will also have the chance to join a prestigious club. Team USA picked up a 97-78 victory over Australia early Thursday morning. The win sends LaVine and Co. into a gold medal match with Team France on Saturday night, a squad that handed Team USA their first Olympic loss since 2004 just ten days ago.

Once down 15 in the first half, Team USA went on to outscore Australia 55-33 in the final two quarters. LaVine was a big part of that dominant run, scoring all nine of his points in the second half and, more importantly, playing some vicious defense on the opposite end.

Kevin Durant led all scorers with 23 points on a 10-19 performance from the field, while Devin Booker fell close behind with 20 points on an efficient 7-10 shooting night. A focused effort on the defensive end in the second half is ultimately what helped Team USA pull off the semifinal victory, however, and Durant specifically praised LaVine for his intensity in his postgame interview.

Mentioning the obvious scoring on the roster, LaVine told reporters when he arrived at Team USA training camp that he wanted to be a defensive stopper: “Throughout the practices I’ve been picking up fullcourt, trying to turn guys, being really active, being in passing lanes,” LaVine told Sam Smith of Bulls dot com. “I think that’s going to help me this next year with my conditioning to where I can go out there and try to be one of the top defenders.”

To the 26-year-old’s credit, he has only looked better and better on that end of the floor since games began, and Durant is not the only one to notice.

Lots for Zach LaVine to take to Chicago from the Olympics:

1) Let others create. He’s got help.
2) Like his USA teammate Devin Booker did in Phoenix, commit to getting scrappy on defense to make his first playoffs (and go deep?)
3) Keep being awesome.

Watching Zach LaVine’s game grow over the years has been something. Comes back every year with something. And is a grinder.

Zach Lavine game is beautiful. It’s ridiculous he can play that smooth. At that size.

Then he brings a trampoline whenever he jumps.

Zach LaVine has been so awesome. He’s been great throughout the Olympics, but this Spain game has been enormous. Really, really working on defense.

Playing alongside some of the best talent in the world, LaVine has found a way to impact winning, and it’s not in the way anyone would have expected. The ability bodes well for his continued growth into one of the bright young stars in the league. Not to mention, it could not come at a better time for a franchise that just went all-in on LaVine’s upside.

I can’t wait to see him suit up alongside his revamped roster, but before he can think about that … he’s got to go for gold!