What the Bulls Got in Derrick Jones Jr. Skip to content 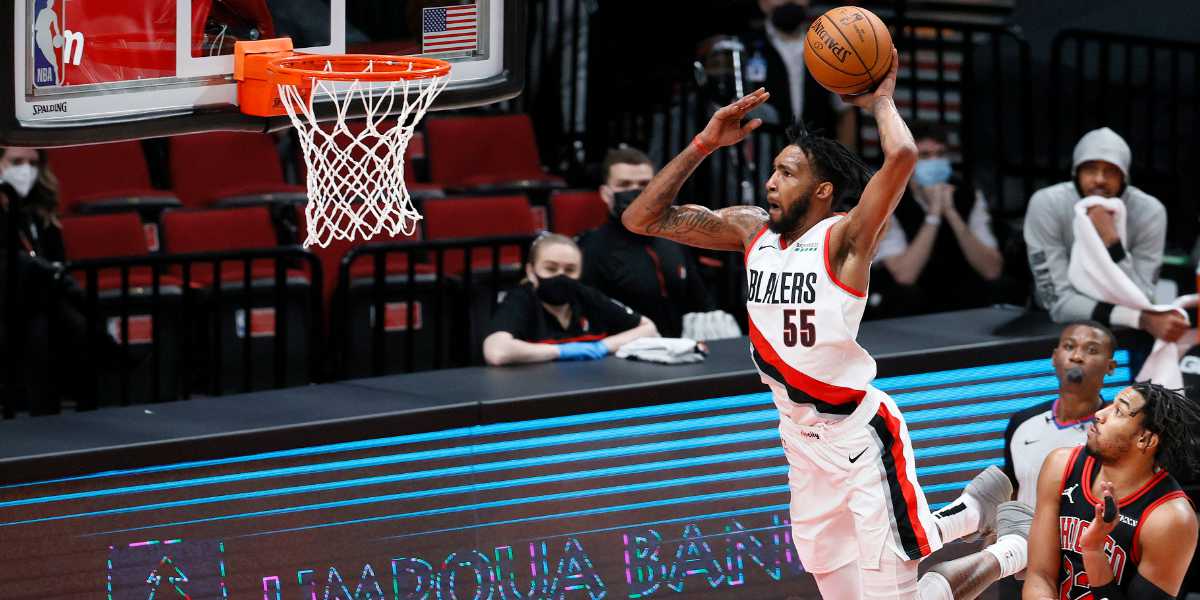 On Friday afternoon, the Chicago Bulls finally moved on from Lauri Markkanen.

The former No. 7-overall pick in the 2017 draft was sent to Cleveland via sign-and-trade as part of a three-team deal. The front office was able to replenish the draft capital they sent out in the DeMar DeRozan and Lonzo Ball deals earlier this summer, but they were also able to add a player we could see become an important part of the team’s rotation this season.

Who is that player? Derrick Jones Jr.

What does his addition mean? Well, here are some words to read …

During the Chicago Bulls 2020-21 Media Day, Marc Eversley made something very clear: “One thing about AK is when he wants to get something done, we get it done.”

Fast forward a little less than a year later, and Bulls fans now know Eversley was telling the truth. Be it drafting Patrick Williams, trading for Nikola Vucevic, or signing Lonzo Ball and DeMar DeRozan, Arturas Karnisovas has shown he will go all out to acquire the talent he covets. And, believe it or not, Derrick Jones Jr. is just the latest example.

One of the first free-agent rumors tied to this new front office revolved around Jones. Not only did we predict that he could align with this front office’s philosophy all the way back on October 19th of 2020, but the Miami Herald’s Barry Jackson also reported that the Bulls were expected to pursue him last offseason.

Speculation continued around Jones, but Karnisovas went on to stay rather quiet with Garrett Temple being the front office’s lone free-agent signing. Clearly, however, Jones stayed on the team’s radar. In fact, according to NBC Sports Chicago’s K.C. Johnson, the first version of the deal we saw finalized on Friday involved just the Bulls and Trail Blazers swapping Markkanen for Jones and a first-rounder.

Anyway, while it may have come a bit later than expected, this serves as yet another example of Karnisovas’ aggressive approach.

GM Marc Eversley: “One thing about AK is when he wants to get something done, we get it done.” pic.twitter.com/NQPZnB0o7T

When the Chicago Bulls went out of their way to add Nikola Vucevic and DeMar DeRozan, concerns started to brew about the team’s young assets. After all, the team parted ways with 22-year-old big man Wendell Carter Jr., and the expectation quickly became that 24-year-old 2017 lottery pick Lauri Markkanen would also be out the door. However, not only is the Bulls’ arsenal of young talent arguably more fruitful than some realize, but the acquisition of Derrick Jones Jr. still shows that youth must remain on this front office’s mind.

Felt like there was concern after adding DeRozan/Vooch, but Bulls still have plenty of young talent on this roster:

LaVine is also just 26, and Bulls have two first next season 😁

Jones has five seasons of experience under his belt at just 24 years old. After appearing in 32 games as a rookie, he was traded to the Miami Heat during his sophomore season, where he appeared in just 14 games. Over the next two seasons, Jones would become a useful rotation player for the Heat, averaging 21.9 minutes per game with 7.7 points and 4.0 rebounds on 51.1 percent shooting from the field. This solid play in Miami ultimately led to a fresh two-year, $18.9 million deal with the Portland Trail Blazers.

Jones averaged a somewhat underwhelming 6.8 points per game with 3.5 rebounds while appearing in 58 games (43 starts) last season. Still, it was a year where he added to his playoff experience after making a Finals appearance with the Heat one season before. In neither season he played a significant role during the postseason (averaged a combined 6.3 minutes), but there is no question being a part of these competitive environments at such a young age can be a draw for a team like Chicago.

And, remember, Jones is on an expiring deal, so if the Bulls do not view him as a future piece after this season’s trial run, they can simply let him walk away.

With Zach LaVine, DeMar DeRozan, and Nikola Vucevic on the roster, scoring points will likely be the least of the Bulls’ worries. With that in mind, the organization has done a decent job at bolstering the defense around the margins with additions like Alex Caruso, Tony Bradley, and now Jones.

Jones is a high-energy and lengthy player who can be a real pest on the defensive end. He might stand only six-foot-five inches, but he has a ridiculous seven-foot wingspan that makes him a very solid perimeter defender. Combine that with his high-flying legs and Jones has a knack for making the big block. The 24-year-old was second on the Trail Blazers in blocks last season with 54, which ranked 4th among players under six-foot-seven. His 2.1 block percentage also ranked in the league’s 99th percentile, per Cleaning the Glass.

No, we should not consider Jones any kind of elite defender, but he should be a plus on that end of the court for Chicago. This past season with the Blazers was the first time since his rookie year that his defensive box plus-minus dropped negative (-0.3), and a good chunk of that can be attributed to Blazers’ team-wide defensive issues (finished with 2nd-worst defensive rating in the league).

As a potential backup to Patrick Williams, Jones should be able to check-in without greatly sacrificing the defensive intensity, which is not something the Bulls could have said with a guy like Markkanen still on the roster.

Jones is technically listed as a wing, and the Trail Blazers kept him true to that last season by playing him 90 percent of the time at the small forward position. However, the season before that, Miami actually had Jones play the majority of his minutes (55 percent) as a small-ball four. An explosive player who lacks outside shooting (31.6 percent on 2.3 attempts per game from 2-point range in 2020-21), he is arguably best suited for filling this role, especially on a Chicago team that has a clear hole at power forward.

Either way, Jones is a slasher who does the majority of his offensive work in the restricted area. He can be a real menace in pick-and-roll situations alongside a high-IQ player like DeMar DeRozan, especially if a floor-spacing big man like Vucevic is on the court. Jones shot a wildly efficient 74 percent on his shots at the rim during the 2019-20 season (93rd percentile) when he played most of his time in the frontcourt, as opposed to a 65 percent clip (66th percentile) last season in Portland.

At the end of the day, however, any offense Jones brings should be considered a cherry on top. The Bulls will mostly be looking for him to be a high-impact defender that can round out their second unit.

Lots and Lots of Dunks

The 2020 Slam Dunk Champion, the Chicago Bulls are about to have two of the best dunkers in the league on their roster.